Shout Out to Rose S. in NC

Thanks so much for the fabric!  You are right......much too beautiful to cut up.  Just love the design and colors.

Loved the zebra design on the padded envelope also.  I can tell you are a very creative person.  Much appreciated.

Tortured by Technology - A Collation of Tutorials: Part 1 - The Blog Button

Are you new to blogging? computers? the alien language that is html? Do you have very colourful, creative and 'best said quietly round the kids' names for your computer? that you shout very loudly (of course, because we are perfect parents, never around the kids!!)? Sound like you?  THEN THIS IS THE TUTORIAL FOR YOU!

Being new to computers (other than to read my emails and reply - now don't laugh but I didn't even know how to add a folder to my desktop!!) taking the plunge…

After many weeks in the "Johns Hopkins" of Baby Lock sewing machine hospitals, Big Ellie is finaly home and back at work. My first project since her return was embroidering an owl hoodie towel for my SIL to give as a gift. I stacked an M from the ADIS Ketichican alphabet that I had in my files with the name written out across the top in Embird's Alpha 5. The towel was purchased at Target. Here is the result:…

Once upon a time there was a girl (ok, a mature, wise, older experienced woman!!) who dithered about becoming a blogger.  After much encouragement from friends who were already ensconsed in blogland she took the plunge.  Many ideas came and went in her head - some of them were even committed to paper, ah screen.  However, she quickly came to realise that even though it seemed like it was a good idea at the time it may not be able to live up to the grand plans she had…

Like many people, I admit I'm thoroughly addicted to the PBS series Downton Abbey set in a grand English estate during World War I.

So when BurdaStyle and Indygo Junction announced their vintage inspired sewing contest, I decided to try my hand at the jacket Lady Mary wore when she asked Sir Richard to keep her scandal out of his newspapers. Isn't it lovely?

So here is my new overlocker cover.  I decided it should show something it could do rather than the sewing machine, so I did some decorative rows of flatlock stitch, alternating between loops up and bars up, instead of adding lots of applique.  I need to buy thread for it in more colours, but the red I has worked well. I just had to add the heart and some more machine embroidery.… My orange t-shirts in all their orange glory. This t-shirt really isn't Kwik Sew 2565 any more. I think I'm going to scoop the neckline out even more, and I don't have the neckband length right. It's too long. Of course, that is trial and error since I'm redrafting the…

Does anyone have any experience sewing on leather furniture.  I currently use a curved needle and I purchase upholstery thread from Joann Fabrics.  I also purchased some suter (sp?) needles from a veterinary site and I bought a sewing glove.

Well my new overlocker needs a cover, so I decided to make a new one for the sewing machine too. Thought I'd do the sewing machine one first as technically it was a simpler shape.  I then proceeded to make it complicated by using patchwork and machine embroidery and applique.  As I have never learnt the correct way to do patchwork I had trouble with the presser foot making pleats in the fabric when I added machine embroidery.  However, I enjoyed myself and I love the end result so that's all…

Lining a Jacket - A Tutorial

Many patterns feature jackets that don't have linings. But if you are used to wearing one with a lining, you will know the advantages. A lining covers up all the unsightly seams inside and eliminates the need to finish those seams. A lining helps the jacket keep its shape better. It provides more warmth if you need it. And, one of the nicest things, the lining makes the jacket slip on and off with ease over any item of…

Sew, sew, sew - well not all the time!  Sometimes creativity of a different sort is necessary to keep the brain cells from completely frying and to keep creativity fresh, spontaneous and flowing.  For me that means knitting, knitting, knitting.  When I am knitting my mind sort of falls into a place of peace, tranquility and serenity.  Wow doesn't that sound great!!  Shame of it is that I can't knit and do all the other things one must achieve in a day at the same time.  It probably helps…

Evolution of a t-shirt I like it. This t-shirt is the combination of 4 different patterns. KS 2565 was the starting point. I used the shape of the french darts from a burda magazine pattern. In order to cover buttus-sticks-outous*, I used a 2 piece back from NL 6977 OOP. And I morphed the neckline/neckband using another burda magazine pattern.

It’s taken me quite a while to get to this…

Maybe a side business....

Well here i am again.... been sewing some for myself today. Made a St.Patrick's Day scrub top for work. Going to start on some baby outfits for a lady at work who saw the ones I made for the grandbaby and now wants some for her great-grandbaby.

Many of my co-workers are urging me to start a small side business and I have been really thinking about it. I love to sew and crochet and have made a few dollars in the past by selling a few things. I want to come up with a catchy name, print…

i am such a sad sad person!!! it only took me 6 months to finally post on here!!! wow, that really is sad! in my own defense though, things have been a bit weird here for quite some time now...maybe one day i'll be normal. if i only knew what normal was it would def give me something to strive toward! LOL...but actually this is normal for me....sad huh?? LOL...i have been pretty busy sewing actually. I've made aprons out the wazoo! mostly for Christmas gifts! i've made bags, purses, totes,…

Okay, as I said I want to replace my Riccar so I can use some different feet.  After going boss-eyed reading up on Elna, Bernina, Janome, Babylock and Juki (yes I know there are more but they were all recommended by someone!) I have decided that on my budget (max £500, about $796) I would go with Janome.  My sewing machine is a Janome DC3050 and it was supplied by my local service engineer.  I had a chat with him and he said  I would get everything I want from the new 9300DX and the money I…

Coverstitch in the Round: How to End

I belong to the Elna Serger Mailing List. Bryden posted these instructions for finishing off the coverstitch:

finishing coverstitch –
stop and make sure the needles are at the highest position, raise the presser foot, and pressing the tension release hook your allen key (the thingy you tighten the needles up with) behind the threads (under the foot) and hook them towards you – cut through the threads and then remove your… 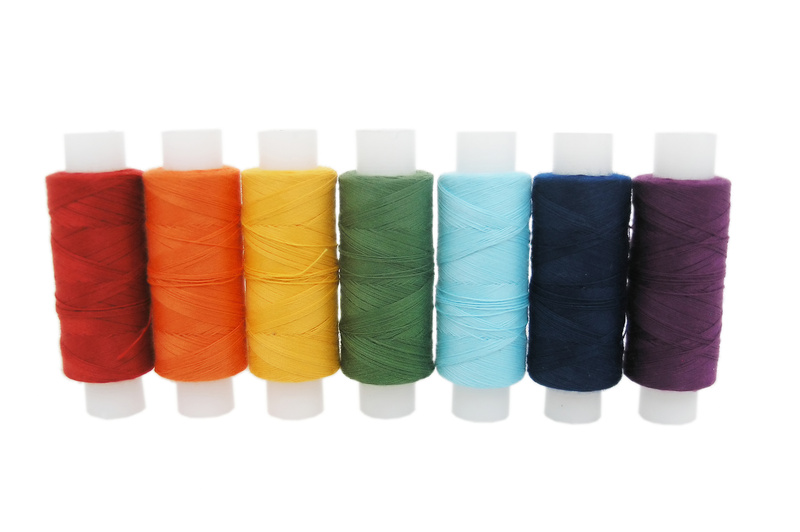 What would you say to someone who told you: "I love to watch TV but my TV only gets one channel so that's all I watch. I'd really like to watch other channels but the reception just isn't very good. I'm afraid if I adjust the antenna too much, I might break it."

My response would be: "Are…

T-shirts are really easy to sew.  However, just like any top, a t-shirt must be fitted if it is going to flatter a very buxom woman like me. I started with Kwik Sew 2565, now out of print, and a tie-dye burnout panne from Joann’s.  That fabric was all… 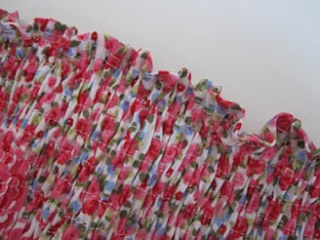