I was asked the other day about unfinished projects. Do I start a new project when I have another one that isn't finished? Of course I do! Doesn't everyone?

Life would be so much easier if I did finished every project before starting another. But inevitably something will come up, where a project has to be shelved for a time. Sometimes it is because I need a notion, or (in most cases) interfacing for the next step (I never seem to have the right weight interfacing ever!).  Sometimes,…

Aprons Made Out of Men's Button-down Shirts

I've been making some super awesome aprons to sell at the store my mom works at, and it's been a lot of fun. I had never made an apron before, but I started from scratch and decided I didn't want to use a pattern.

I have made quite a few, including some awesome ruffly ones. But I saw in a copy of Apronology some awesome aprons made out of old men's button-downs, and I gave those a try. I think everyone should do the same...,. they came out SO CUTE and were actually super easy. And the…

It is all about attitude

My husband, aka the Man, is an optimist, and he sees things differently than I do. And he is always saying, 'it is how you see things, as to what it will be'. It's only taken 26 years, but I see his point. We have a son (aka the Boy). And while he was growing up, he was… 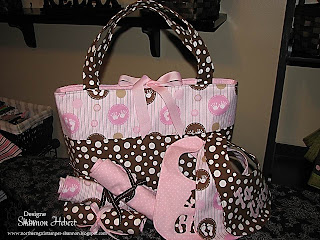 This July I know several wonderful woman that are having babies. So i decided to start with the girl gift ensemble for that special day. I used flannel material to match the Rag…
Continue

That's What Friends Are For

Hand is a four letter word.

So when I started to sew, maybe age 6, I was all about the machine. I didn't want to do anything by 'hand'.

Sewing by hand was for babies. Hand is a four letter word. It is to be avoided, until all else fails. To this day, I will spend hours trying to figure out how to do something by the machine, when if I had done it by hand it would be finished. I am all about finding the tools that help me.

When I was first married (26 years ago) we didn't have much money. The sewing… 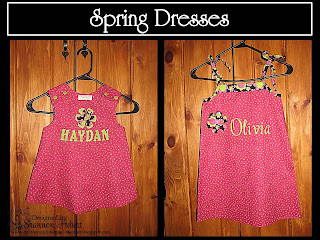 My Daughter is going to be 20 years old This July so she is not at an age to make all her little spring and summer outfits. I miss making all her matching sets, SO I…
Continue

This is just too much fun!
I've been working too darned hard - and decided to sneak in a new dress for myself this morning...as my Vogue patterns (see last post) arrived yesterday!

I am so fortunate to be able to not only have been taught to sew - but to have the $ TO sew,… Continue

I didn't accomplish a lot of sewing this weekend. The navy pants are about half finished. The fly-front zipper instructions were not clear and I had to pin & baste all the steps to make sure I understood them correctly. The zipper looks nice now that it is in, but it took extra time.

I did make an apron over the weekend. I purchased the panel at the Original Sewing & Quilt Expo held recently in Schaumburg…

I'm in the market for a Serger. Never had one but with my B-day and Mother's Day coming up (I gave my family "permission" this year to do a combo gift, lol) I've asked for one. I would love some feedback on your serger experience and what brands you have so that I can start my search. Thanks!! Can't wait to hear from you!

I am going public. Yep, it's true. Last night for the first time every in my whole entire life I knit in public.

I am not a "Knitter". I only knit. "Knitters" are people who live, breath, sleep and eat knitting and yarn. You can call out a pattern name and "Knitters" immediately know exactly what you are talking about. Yeah, that's not me. I can barely remember the name of the pattern I am working on, let alone patterns from magazines 5 years ago. And my yarn…

In Lieu of Working…

I know. I'm supposed to be slaving away at work right now, but hey, every girl deserves a break, right?

So have you seen these mug rugs? They are just way too cute! Two thoughts—

My Soul is Fed by Needle & Thread

Tonight I cut out these pants sans cuffs in some navy blue cotton fabric for summer.

It's been a few months since I have sewn actual garments. I have been so blue over my mom's illness and death that I just didn't have the desire to really delve… "Ever since I can remember, my mother has been trying to get me to sew. But I never wanted any of it.


She knows all the tricks. She'd lure me downstairs to her sewing room with something else, then change the subject to which fabric would work best in her quilt. Sometimes she would offer me inducements, which I'm guessing she figured would work since it proved so… Continue

Carol Tucker is the great-granddaughter of the late Fannie Bonner, the first "free-born" African in Lincoln County, Tenn., where she was born on a plantation in 1863, the week the Emancipation Proclamation was signed. (She passed away in 1968 at 105 in her hometown of Canton, Ohio).

As a seamstress, Tucker feels sewing with African textiles is… Continue

The lady who I made the piget bed runner now wants one for her other daughter with Tinkerbell on!! This is going well so far, but Tink is far more complicated to copy than piglet. hey ho, i will keep trying though.

I usually sew 100% cotton fabric in all my creations, but recently I was perusing ebay and came across someone selling upholstery fabric in 5 inch squares, very cheaply indeed. Thought I would just give it a go, and it has made a lovely cushion which I am going to give to… Continue

Well, I don't know how everyone else feels about watching the contestants on Project Runway, but they make me want to go to design school! But, I'm 43, and there's not one just down the road from my house! So anyway, I  went to my local fabric store for a class on Pattern Making.  I kinda figured it was a sales pitch, and sure enough it was.  But, it was for the Lutterloh system, which I had read a LOT… Continue

I am turning an extra bedroom into a sewing/craft room. I have so much stuff it's ridiculous! But, I am having trouble thinking of how to store my silk flowers so that I can see what I have without having to dig through boxes; a way they won't get crushed, as they would if stored in see-through bins; a way that I can display them, maybe in some type of system that is attached to a wall??? Can anyone think of anything? Please let me know. I am desperate!

A Little Bit About The Walking Foot

A walking foot is a mechanism for feeding the fabric through a sewing machine as it is being stitched. It is most useful for sewing heavy materials where needle feed is mechanically inadequate, for spongy or cushioned materials where…