The Skirt that was a Shirt 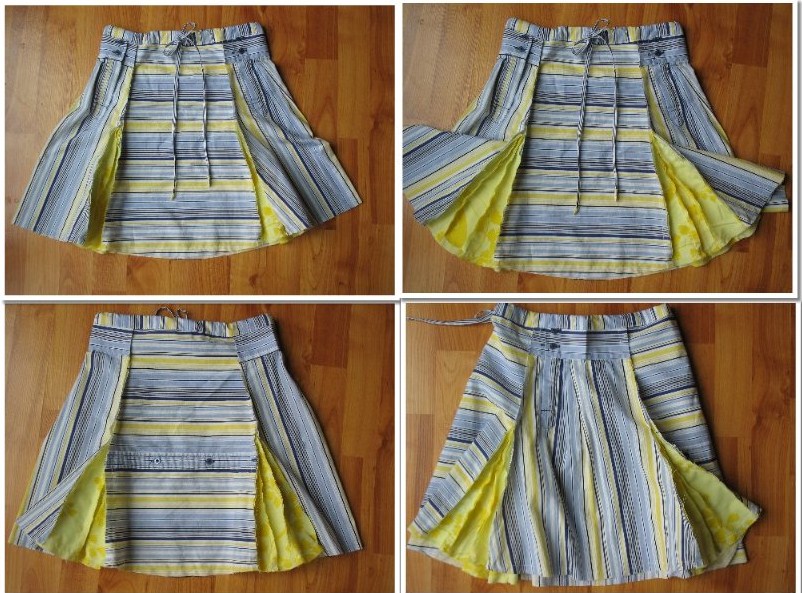 This was once a size 12/14 dress shirt that was hiding out in the recesses or our son's closet...just begging to become a skirt for my 11 year old daughter. I'm in a skirty mood now for some reason, so this project was extra fun. The best part about this one is that it has raw edges exposed which is cool looking and requires no serging or…

Confessions of a Zipper Virgin

* cringe* Ok...so I've never installed a zipper - there, I admitted
it, along with all my other sewing shortcomings in previous posts. Not only have I neglected installing a zipper, I've avoided it like the plague. I keep old zippers I've cut out of a variety of discarded clothes, in a jar
for looks in… Continue I got a surprising response about my therapy Raggedies, some wanting to make their own for donating, so I thought it would be a neat idea to start a blog dedicated to therapy dolls. If you're familiar with the Toy Society, it would be similar to that only you aren't dropping dolls off randomly of course! …

When appliqueing, I think the idea is to do it
without puckering up, but I'm learning, so I puckered. This venture was attempt number two. You may have never heard of a
Challah cover, but it's what both Jewish & Messianic believers (me being the latter of the two) use to cover two yummy loaves of bread for the Shabbat, or "sabbath". I wanted to try my hand at making our own for our Shabbat… Continue

Sorta like a game show, only without the TV cameras, annoying hosts, pretty people...or prizes.

Now you guess what it is.
No Googling!


I just found this term today. Call me sheltered, but I was clueless. I was online, reading along, came across it & I thought -- "what on earth?" How do you even pronounce "armscyes"? My suspicion: a man came up with the term... *wink*

OK so you guys… Continue 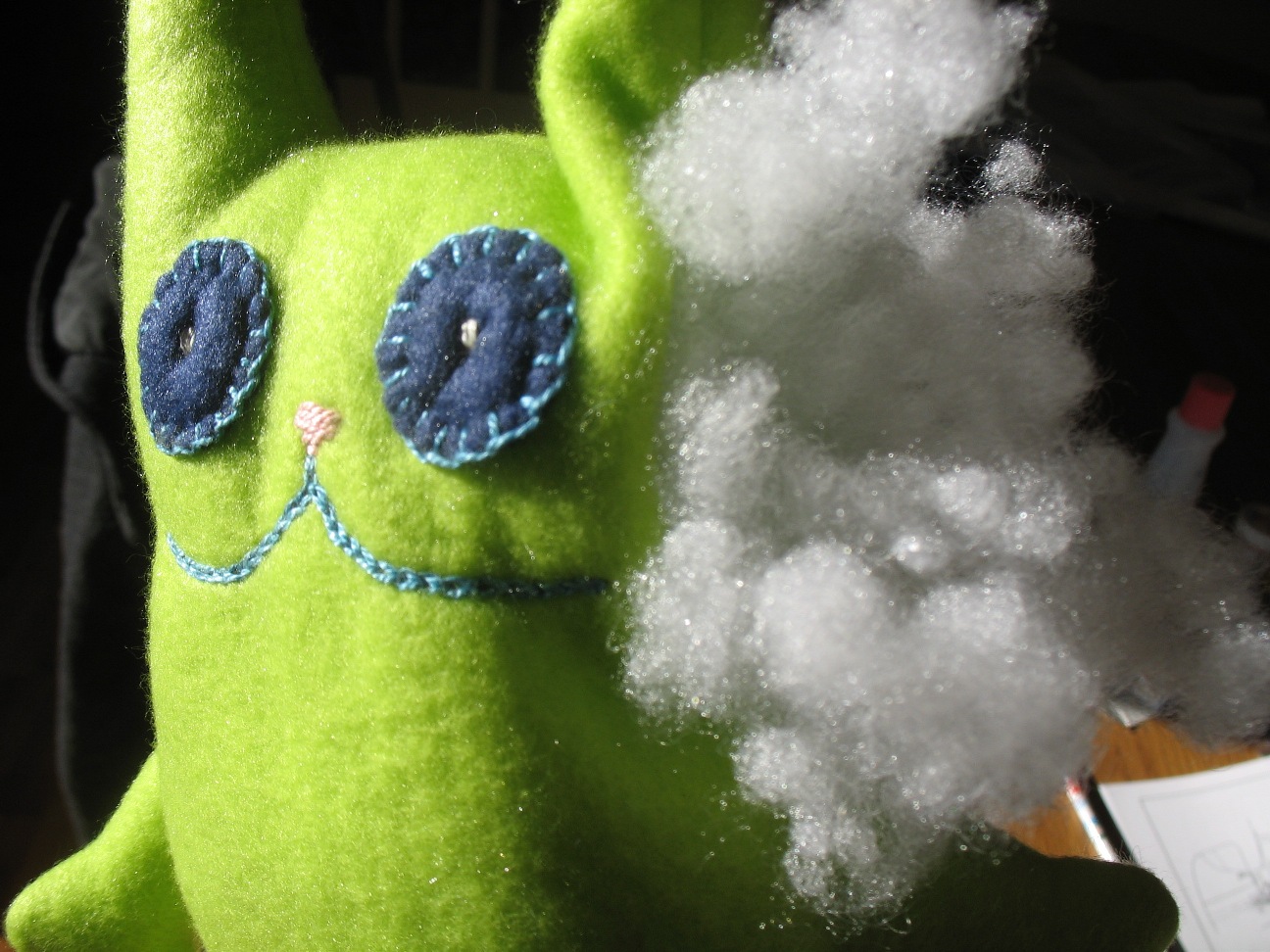 "What??? I can't hear ya..". This one happened after my daughter saw
Ugly Dolls at Sam's Club. She wanted one, but didn't know that her daddy had already picked on up for her earlier in the day. Too bad the one she wanted wasn't the one he'd picked out - OOPS! She also wanted one of those
Domo… Continue

You Can Make This .com

I found this site today andit's really, really cool ...MAYBE the most awesome pattern site I've ever found (that I remember anyway : )
I thought I'd pass it along to you all.
They've got great PDF patterns , e-books & even some free stuff. They also have a crafting section for beaders etc... Look for the categories on the left.
I love the way it's all consolidated so you're not searching all over the… Continue

'Til the Cowls Come Home

Have you all seen the yummy cowls/circle scarves on Etsy yet? I would
love to be able to knit a humongous cowl...sadly I'm not so inclined. I did see some fabric & fleece ones I liked, but the Hancock's sale fleece I ordered probably hasn't even left the warehouse yet. Instead of waiting, I raided the closet. Not what I wanted, but it was practice anyway and practice makes perfect (sometimes).
Here's what ensued...… 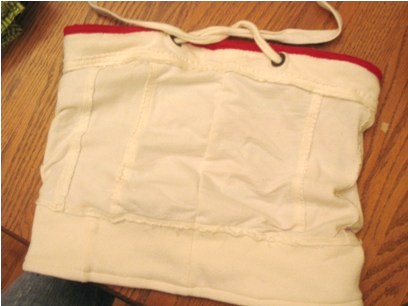 Remember that "short story" by Hemingway, "For sale: Baby shoes never worn."?? What a hoot...anyway, if somebody's selling an unused monkey forehead, I'm in the buying business.

OK, OK! It's too late for him... I know. He's just short headed and he'll have to learn to love himself, that's all. It's not his fault that I created his pattern without a forehead. I'm not sure anyone else will accept him, but when it's a free toy, people really shouldn't really be… Continue

"First time corduroy sewers, raise your hand!" *me raising my hand* Boy was I clueless! I was ready to start on a new monkey pattern; one I had loads of fabric to create with. 8 yards to be exact. I was all excited about my brand new, perfect shade of brown, thick waled cord I'd found at the charity shop. I'd waited weeks and finally I had the time (and motivation) to dive in. Excitement was in the air! Yeah, that was BEFORE I knew what a
pain in the rear corduroy was to… Continue

Ever feel like a total craft failure?? I just found
this hilarious blog that lets you submit your horrible craft "fails". The ones that you never admit to, much less take pictures & post on the web (well I do that but...) It's a great idea and makes you feel better about your crafty short-comings : )
What's your craft fail??? Here's just one of mine and in a most unflattering light. …
Continue

While not everyone celebrates the upcoming holidays, for those who do, don't shoot me, but there are only 64 days til Christmas and even fewer until Chanukah!

Is anyone participating in the handmade pledge for the holidays?? That's where you buy handmade and as others to do the same for you. While I would love something handmade, whenever I ask family (the ones I buy for) they never mention hand made items in their list of… Continue

Is Your Bobbin in a Bunch?

Probably not, because chances are you're a lot more organized than I am!. I've already revealed my lack of a sewing room *sniff* & organization of my fabrics & supplies. I'm trying to remedy the latter, really I am. Getting the supplies organized means I can actually have more time to do what I love, so I'm really working on it!

Since I have no fantastic place to store my bobbins "yet" I've resorted to the a tip I found somewhere online that seems to work in the mean time.… Continue

Are You a Fabric Organizer?

I don't have a sewing room right now (kudos to everyone out there who has one!). Whenever I sew, I have to drag all… Continue