"First time corduroy sewers, raise your hand!" *me raising my hand* Boy was I clueless! I was ready to start on a new monkey pattern; one I had loads of fabric to create with. 8 yards to be exact. I was all excited about my brand new, perfect shade of brown, thick waled cord I'd found at the charity shop. I'd waited weeks and finally I had the time (and motivation) to dive in. Excitement was in the air! Yeah, that was BEFORE I knew what a
pain in the rear corduroy was to work with. Before I knew that no matter how much you pinned, or didn't pin, the stuff creeps every time you sew it! Nothing lined up *grr* Now corduroy & I are
NOT friends. There may have been tears...and maybe some steam rising from my head. Let's just say that experience was enough to make me want to throw the entire 8, beautiful yards in the garbage...after I'd stomped on it vigorously, then shredded it in the paper shredder maybe. 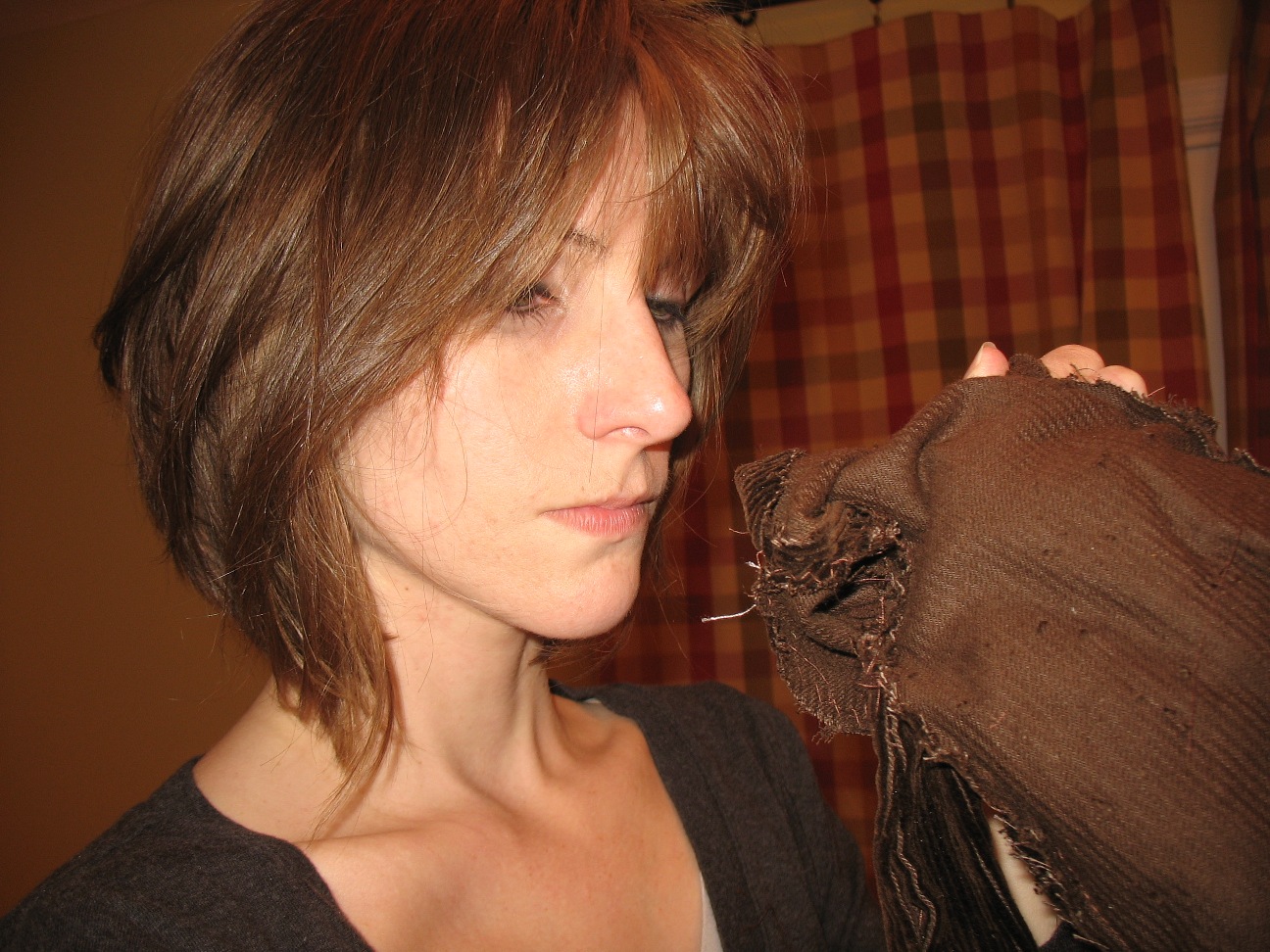 I ripped the face off that corduroy monkey and decided I'd switch to my old stand-by, fleece. Fleece IS my friend. We've spent many hours together, fleece & I. Did I feel like a failure? Yes, but when you're in the "sewing zone", you gotta make somethin' happen. Here's what happened: 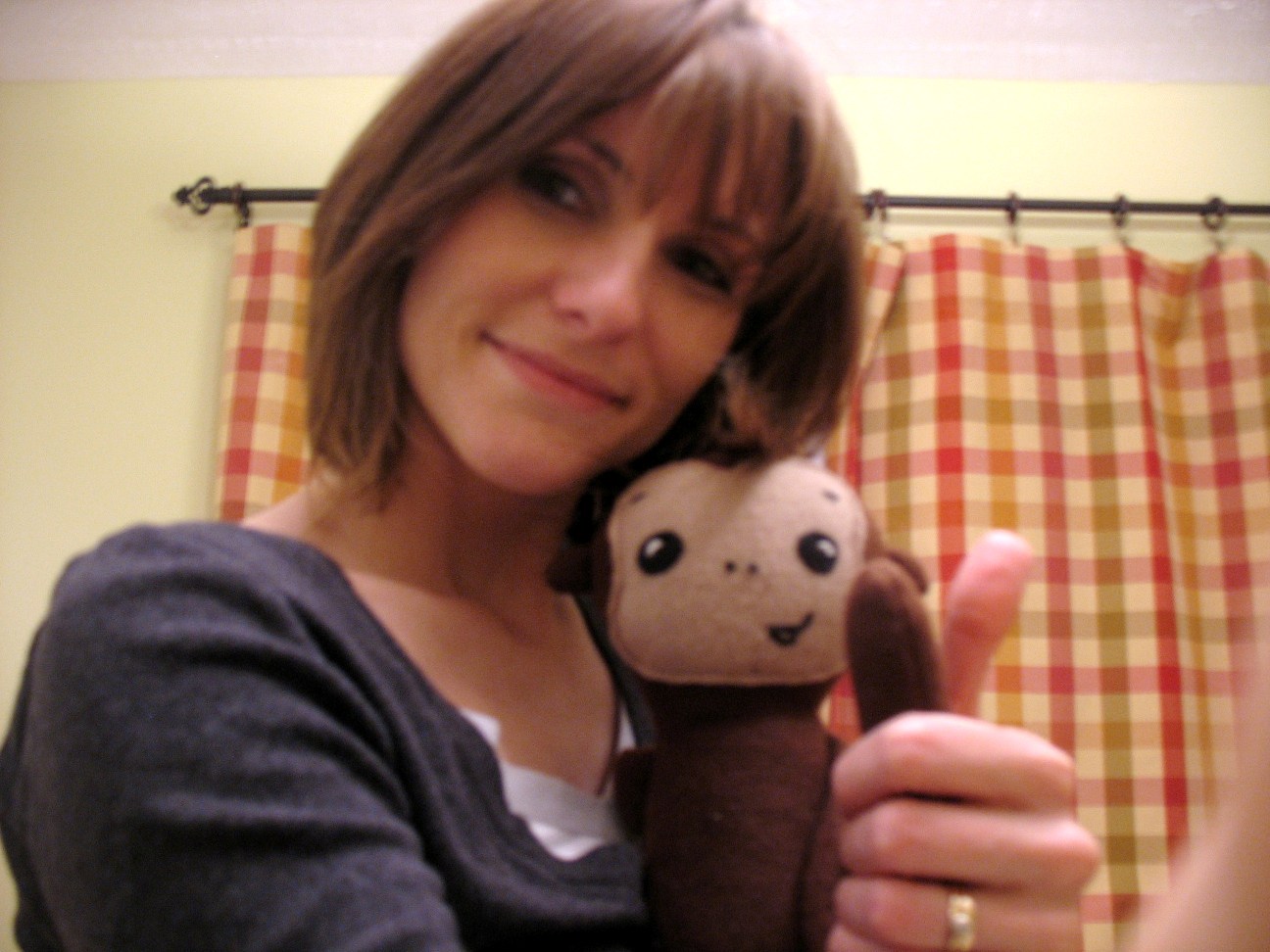 Then I decided she needed a sundress, you know, 'cause it's winter & all, but who cares, right? Too bad I accidentally sewed one side together wrong while using one of those fancy stitches that eats up lots of thread & hundreds of stitches *doh* I blame that on Youtube & ABC's new "V" series (love that show!) Ever made a fabric flower? I got all fancy and made my first fabric flower. Easy! *side note - do you have trouble with pins from Wal-mart being dull?? Mine new ones were dull, needles & pins both. Trying to shove that dull needle through all those gathers was not fun. Matter of fact my old scissors were dull too. I was thinking of getting a new pair, but I'm feeling rather cheap. I saw this nifty looking ceramic sharpener at Wal-mart for about $8 then thought, *phfft* Please! I have ceramic at home! Once I got home, I tried scraping the blades along the bottom of a mug. You can probably guess how that turned out. So I have a new monkey, but not the coveted corduroy monkey I wanted (I need some corduroy sewing tips!!) I decided to name her Mimsy. Here she is: 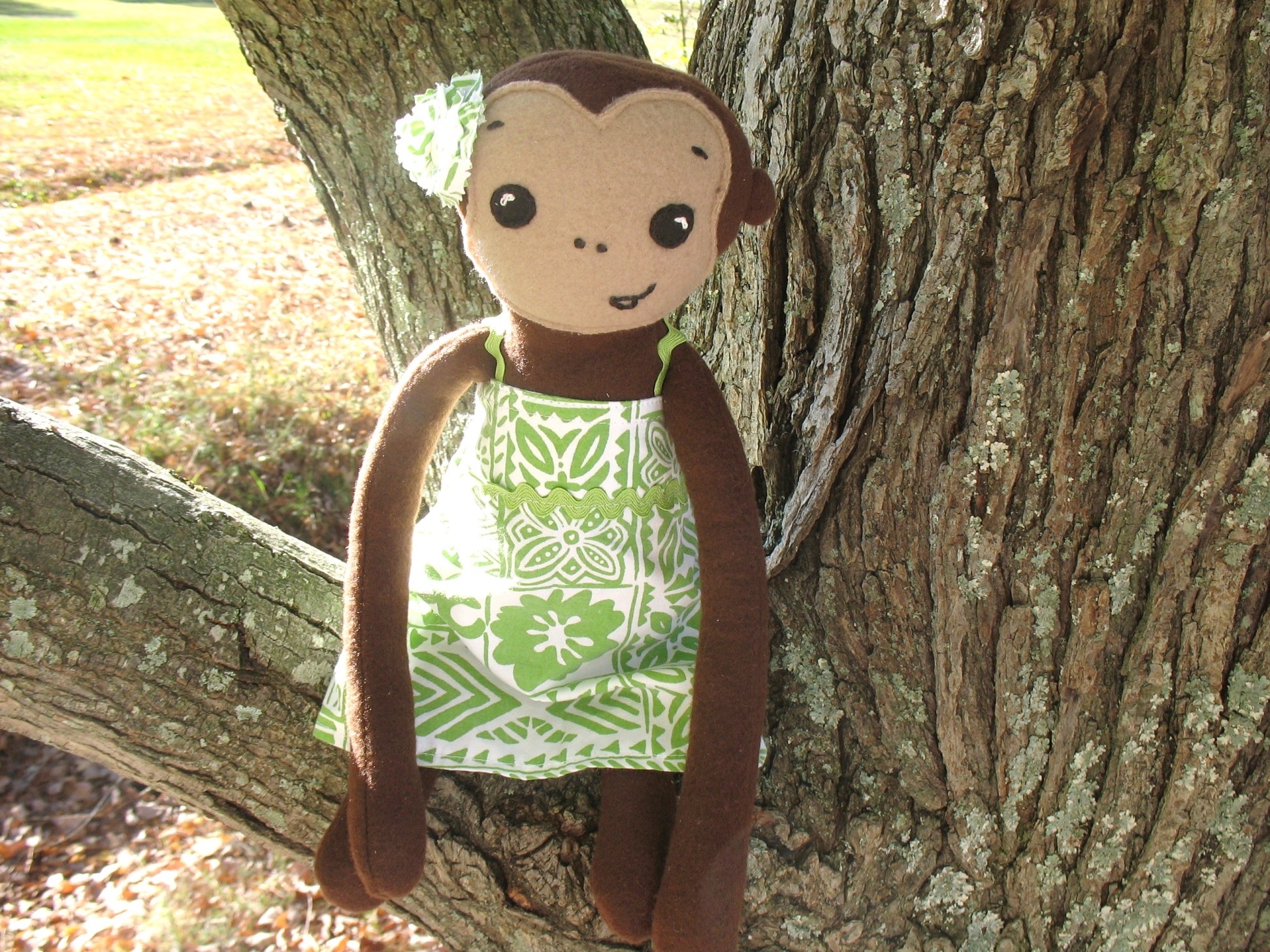 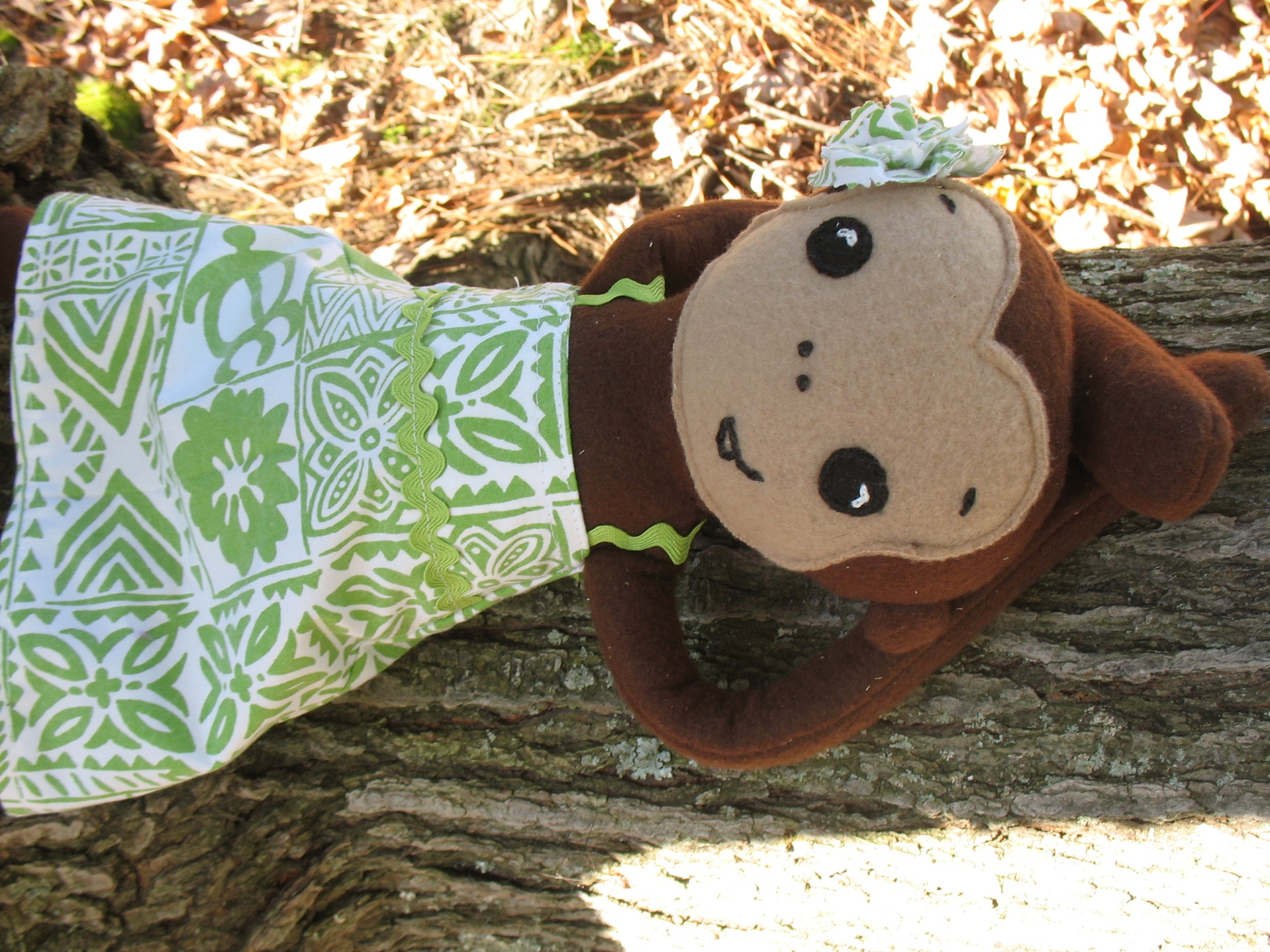 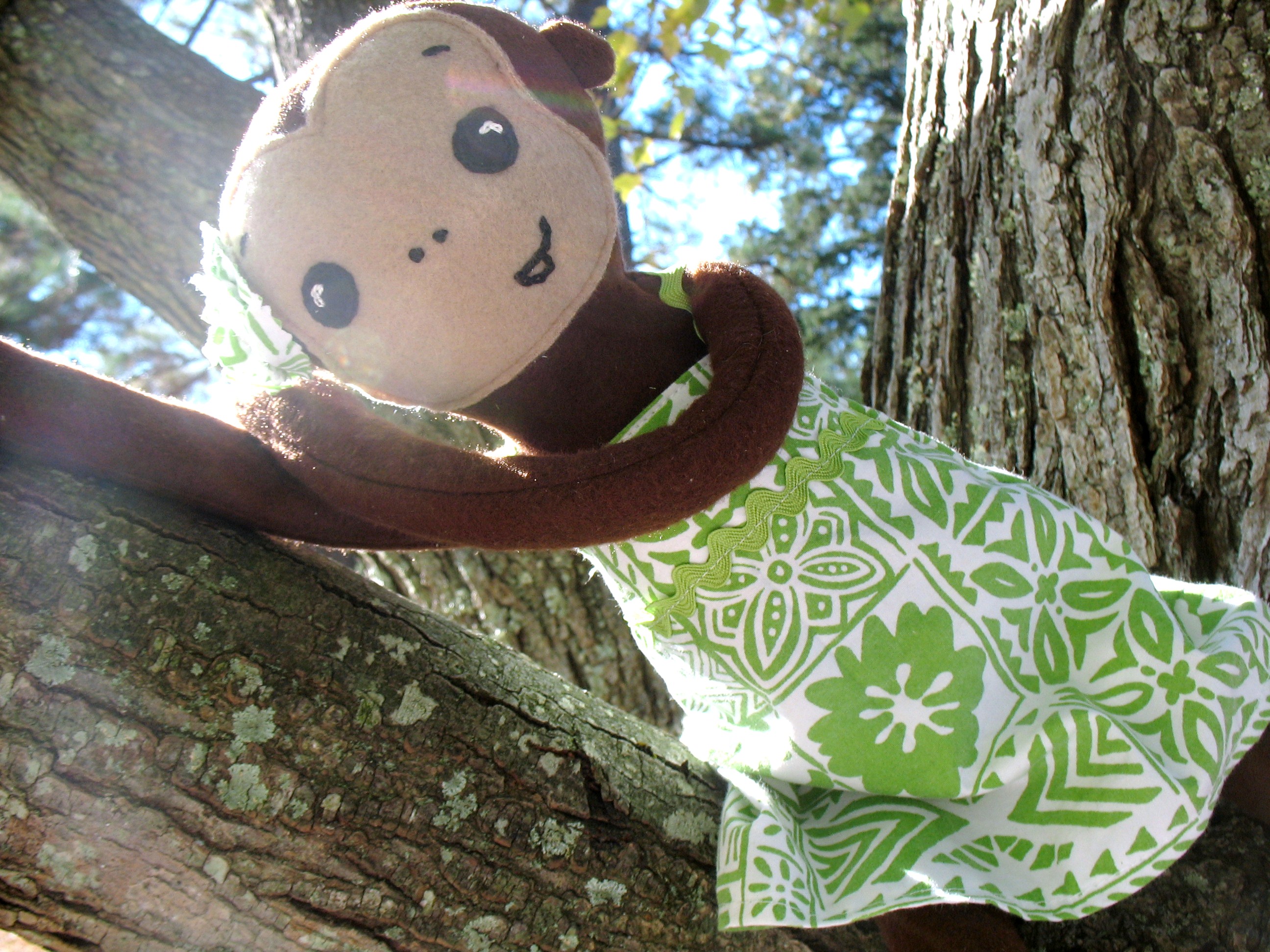 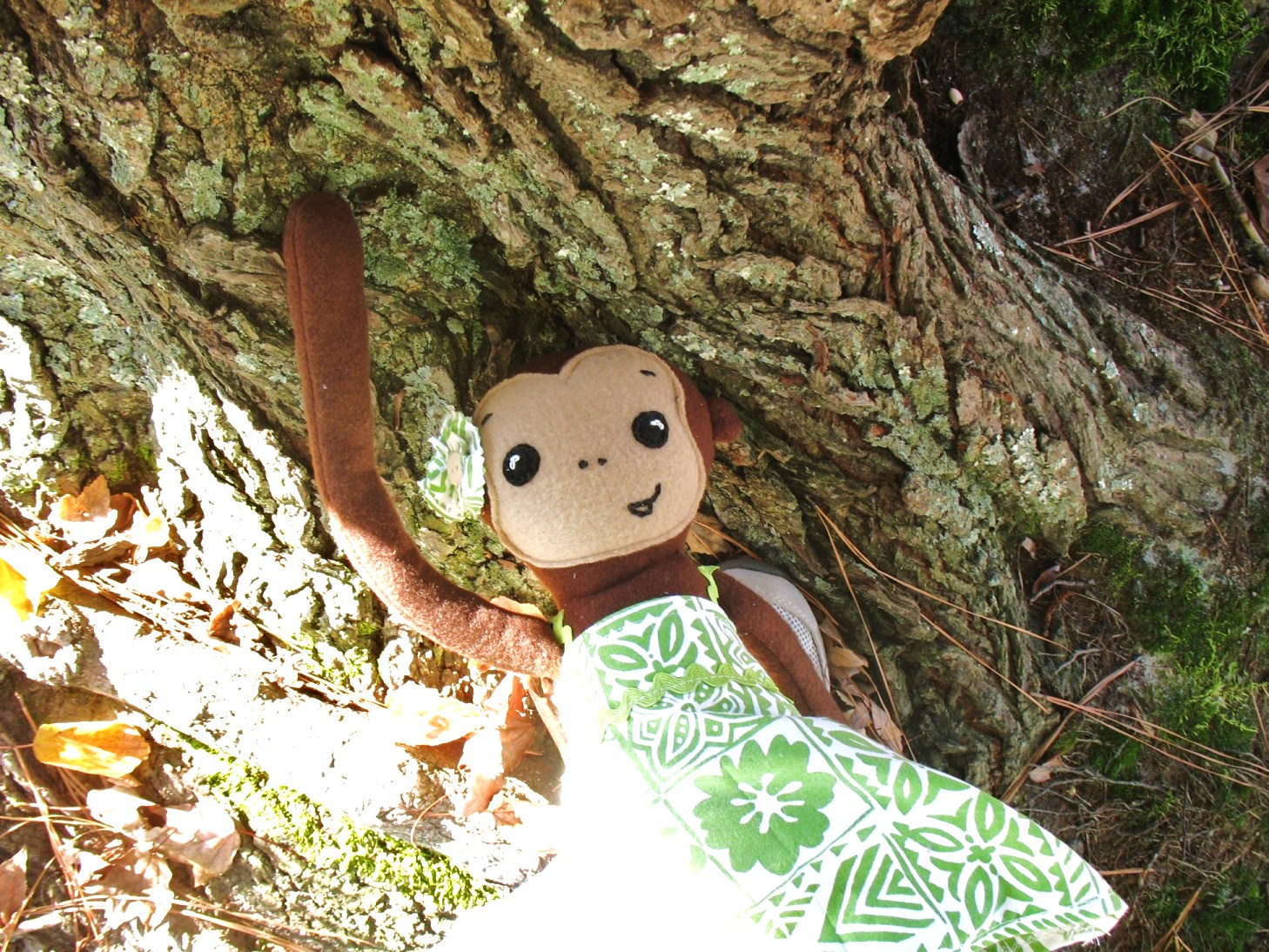 ...but she did it with grace & a smile : ) Does anyone have any experience with or tips for sewing with this pretty frustrating fabric while maintaining sanity? I did do my part and read up on a few. One was using tissue paper (I really don't want to have to go ripping paper from every seam) and another said to smash the pieces together so they stick to themselves. I haven't tried either, because, right now, I don't even want to
glance in the direction of corduroy. I will though. I wont be outdone by corduroy. I'll tackle it again and, oh yes, I
will win.

Had no idea corduroy was that nasty... had a mind to make capri pants for my neice, out of it.. but I've decided against it now that I'm forewarned.. I don't want to invest in something that will bring me to my knees when I already am there most of the times I'm sewing..still a newbie...

Comment by GiftedGrandma on November 28, 2009 at 11:15am
Adorable! So was you naration of problems with you cutie :O)

Comment by Jodie Hickman on November 16, 2009 at 11:45pm
I would suggest using a roller foot. I bought one for $8.00. I seems to help with difficult fabrics. I used to put painters tape on the bottom of my foot and over my plate and just cute around opening with a craft knife. A roller foot works much better. My machine has a walking foot which is wonderful. But, you can always buy one for your machine. It is highly recommended. I love your little monkey! Fleece is a lot easier to turn that corduroy. I've been there.

Comment by Melanie on November 10, 2009 at 10:58am
Love the monkey! Anyway, I sew with cord a lot, in all sorts of applications. When the cord needs to be matched, say on the monkey's arm seams, I loosen the tension on my presser foot and use a longer stitch. You could also try dropping the feed dogs and moving the fabric yourself. The presser foot tension is usually what 'creeps' fabric for me, otherwise, my trick for organza and other silky fabrics is to use 1/4" fusible tape first, then sew the seam, I bet this would work on cord too. Good luck in your next cord project, its a wonderful fabric!

Comment by sseleen on November 7, 2009 at 11:10pm
That monkey is awesome- that captures the emotion one is seeking when toddlers have grown and puppies are out of the question...just lala la love. anyhow, The bigger the cord the simpler the pattern. (that's my opinion) use "sharps" or "metalic sharps" can make a big difference in your sewing. baby cord and flat cord ca be moved in for any tricky spots. remember for big whale cord, that if you try to achieve a 1/2" seam, you are using aprox 1/4" of fabric just dissapearing at the fold sight. I've done this gorgeous ottobre dress from ottobre--- i'll get back to you -very cute but called for velveteen ad cord and i have made in every kind of corduroy- where it gets to bulky i have just stitchrd it out by hand.- stacey

Comment by Linda Alsbury on November 7, 2009 at 10:47pm
Darling little monkey girl! Sweetie face! What pattern did you use? I would love to make her for my grandgirl.

Comment by Dragonwyck on November 7, 2009 at 7:29pm
Corduroy and Elmers washable glue sticks (applied to the seam allowance) are good friends.

When fabric ravelling is an issue I zig-zag the edges.
Seems like a lot of extra work but definitely reduces the frustration factor.