...and finally, I finished the Campervan Messenger Bag!

So all I had left to do was make and fit the turquoise lining.  I applied fusible fleece interfacing and overlocked all the edges.  I made the zipped pocket as per the pattern, but went back to my own template for a larger one than Ruby’s, and used the same lining fabric inside, not the exterior fabric as in the pattern. 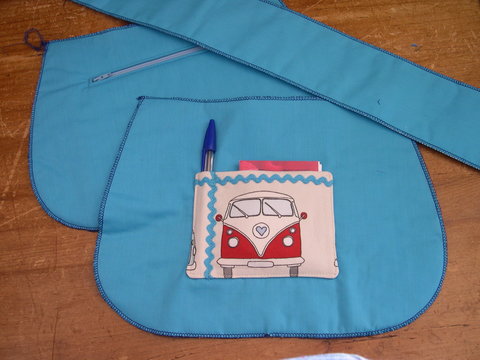 I also added a divided slip pocket on the other side, to hold a notebook and pen.  Like the extra outside pocket this was not in the original pattern, just something I decided to add.  I’ve had this turquoise Ric Rac for years, so it was nice to finally find a use for it!

Then I stitched it all together and fitted the outer bag inside.  At which stage I discovered my lining had mysteriously become too small.  I’m not sure how it happened, but I quickly cut and interfaced a new wider gusset and tried again. This time it all went together well and I stitched the lining in. Once I turned it right side out all I had to do was a little top-stitching.  As my choice of fabric and interfacing made it rather thick over the strap, and I didn’t want to top-stitch over the piping, I just top stitched the front and back. As you can see, my lining is puffy and soft, and the piping is a good contrast to the lining.  I’m pleased with my extra outside zipped pocket too.  Sorry it’s so dark, but the sun hasn’t been out for a few days now, this was taken at 3.00 p.m. in the afternoon in my conservatory!  I had to borrow the bedside lamp to brighten up the next one! 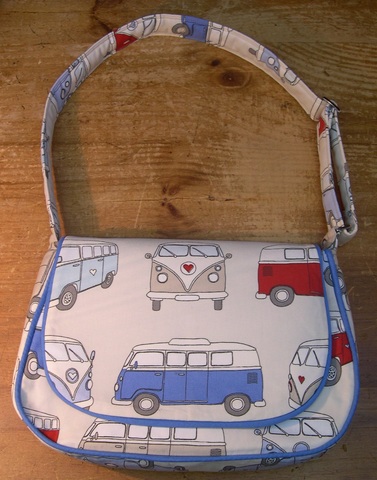 There was still a good sized remnant left so I made a 16” cushion cover for her bedroom, with a centre back Velcro closure. Then I whipped up this zipped pencil case, following Lisa Lam’s tutorial for a ‘Top Edge Zip’ in “The Bag Makers Bible”.

I am rather pleased with how it turned out, despite bemoaning the waste made by fussy-cutting the fabric to get a van in the centre!

I used some navy Water Resistant nylon for the lining, so pen and pencil marks shouldn’t spoil it!

I like the way she adds a tab to the ends of the zip, it makes the ends nice and neat.  The only other place I have seen this done was in the Triple Zip Pouch Tutorial by Debbie of A Quilter’s Table.  She was challenged to retro engineer it from one bought as a gift for her in Hawaii!

So that's done, and in good time for Christmas as requested!  Apparently the sun might shine tomorrow, in which case I will rush out and take more better photos to put in my album and on my Flickr page!

The Making of this Campervan Messenger Bag Saga!