I have another commission for a memory cushion, but this time it's for her 'other half'. He enjoys fishing so she gave me this photo of him with his catch to use.  I had to edit out the carrier bag, tilt and crop it before trying it out with black, white, sepia and 'old photo' effects. We decided we liked the 'old photo' effect of muted colours best this time rather than the sepia, so then I printed it off on some washable cotton.  To make it more masculine I am using wool tweed, faux suede and corduroy to piece the cushion. 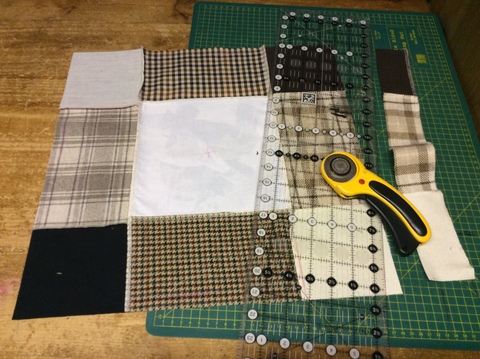 I added pieces above and below the photo to form a strip, then made up two strips for the sides.  I used my overlocker as it made 1/4" seams and neatened the edges in one go.  I joined the three strips together, then trimmed it down to a 16" square. 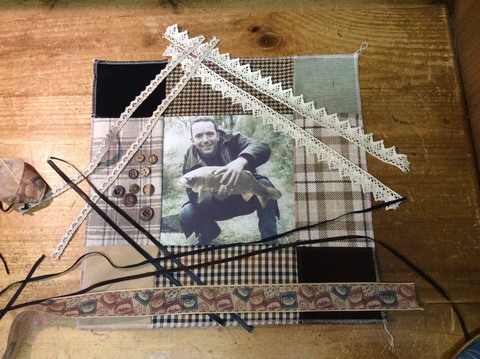 Unlike the previous cushions I am keeping the uniform shapes, rather than adding random pieces. I pulled out some crochet lace trim, black satin ribbon, brown faux suede ribbon and a vintage stamps ribbon along with a selection of buttons to try.  Although I love the scalloped crochet lace, I think it may be a little too 'girlie'! 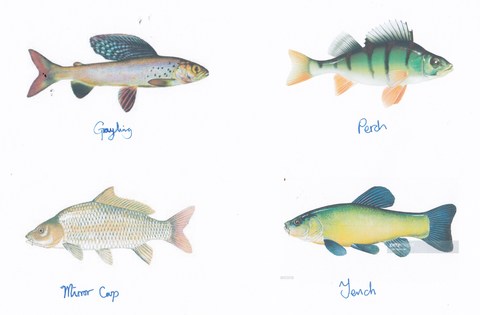 This time the hand embroidery will be of fish!  As my other half is also an angler, he helped me choose my subjects and we settled on a mirror carp, tench, perch and grayling.  Two face right, two face left, one for each corner. I am trying another version of Sulky "Solvy" this time, "Sticky Fabri-Solvy".  I traced my fish using my light box and Frixion pen.  I cut them out making sure they fit the corner squares, then peeled off the backing and stuck the first piece in place ready to embroider the tench fish. 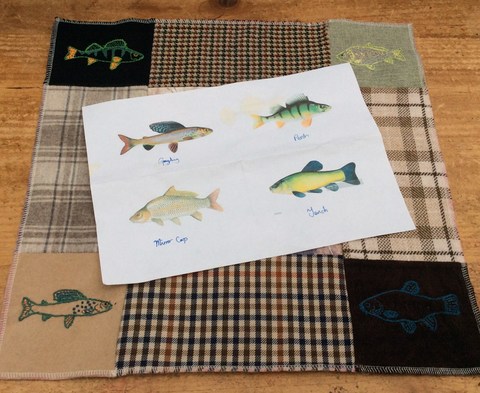 I used Perle Cotton #12 and stranded cotton floss.  I used stem stitch for the main outlines and straight stitch, french knots and colonial knots for most other details.  I used fly stitch for the scales on the mirror carp.  Once I had finished I dunked it in water to remove the Solvy then panicked I might spoil the photo, but it was okay.  I think I should have just done one corner at a time and avoided getting the picture wet. Once it was dry I gave it a press then I added the narrow crochet lace trim, some 'vintage stamps' ribbon and just for fun a tape measure trim and a 'Gone Fishing' trim!  I'm also going to add some flanged cord piping which I am pinning on ready to baste in place before sandwiching between the front and back.  The back is going to be plain but I will add a little trim. 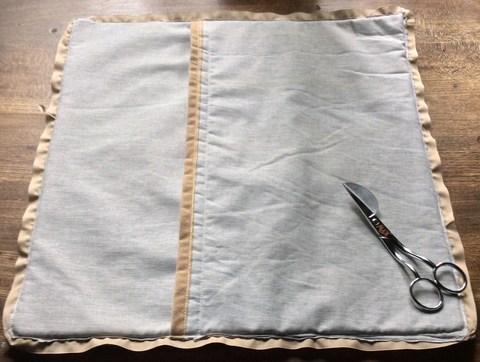 I trimmed the back out of the seam but left the flange untouched in case it frayed.  The front was already overlocked.  When I turned it right side out I noticed where I had not caught the trim on one side and where I had not got close enough to the piping.  I had to stitch it again. Twice.  I was using the universal zipper and piping foot, I guess I should have trusted it more! The finished back, after adjusting my stitching to get it close enough to the piping!  I prefer to keep life simple so I use an envelope closure.  I added the "Gone Fishing" trim here as I thought he could turn this side up when he heads out rather than write a note! The finished front.  I wasn't sure if I liked it as I was putting it together, but I have to say I am really pleased with the finished cushion!  It's fun. 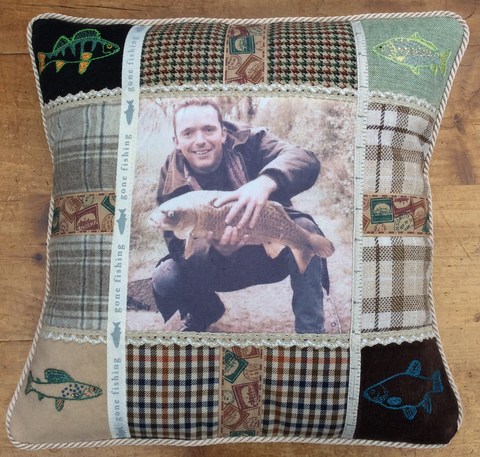 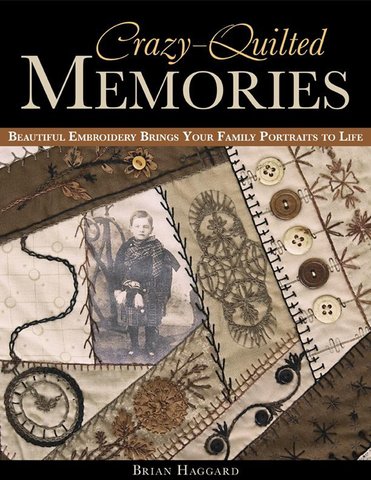