As I said, my sister liked the Josy I made and asked if I could make her one.  She wanted me to use the rest of the black and white houndstooth skirt we recycled for her 25% bigger Sherbert Bag if there was enough left.  There was. 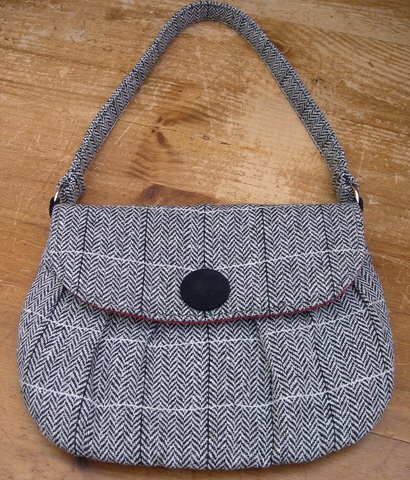 One of the first problems was going to be cutting out the pattern pieces so that all the herringbone lines matched up on all of the seams.  I only managed to match the flap and front pieces on my bag, this time I wanted them all matching up!

I found the easiest way to work out where to place the pattern pieces was to cut out the woven interfacing pieces, then use them as as the pattern pieces on the main fabric, as I could see through them.  That worked well, and I fused them all together. You can see the flap matches up to the back this time!

Happily I made notes on the pattern when I did my 25% bigger Josy Clutch and then changed and embroidered it, which helped!

1.  The first was about the magnetic snap on the front of the bag. "To allow for the extra thickness of wool and extra interfacing, the snap has to be as high as possible, do not fit snap until front pieces joined and top-stitched OR use zipper foot to sew seam past snap!"  I always add a square of firm fusible interfacing to reinforce the area around the snap, and another over the snap to "soften" the hard edges. 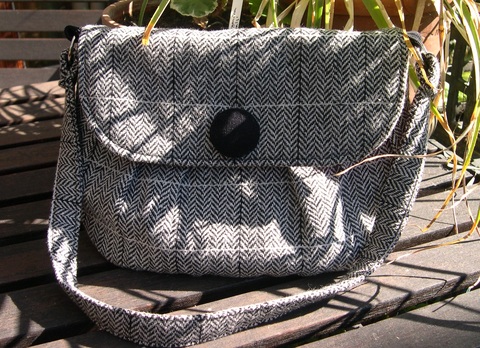 Standing up by itself!

3.  I like to add fusible fleece to my lining pieces, because I like the squidgy effect!  I add a zipped pocket too. 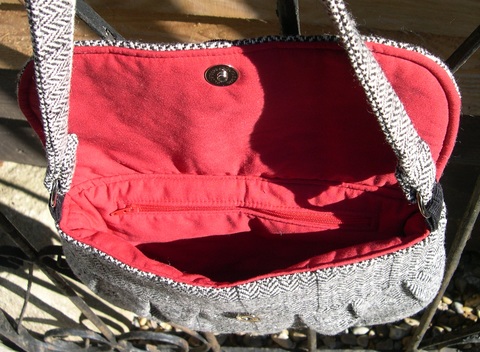 I like a squidgy lining, and a nice pop of colour! 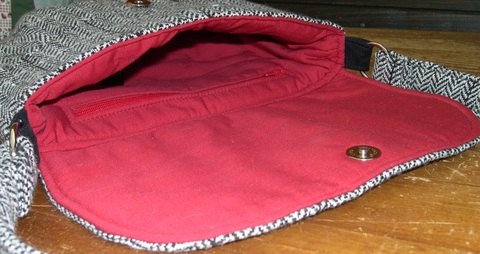 This shows the colour of the lining better

5.  I made the strap following the Tester Shelly's suggestion to add interfacing to the handle. I made co-ordinating black corduroy loops (tabs) for both ends - the pattern only uses a loop on one end - using 2 shiny silver rings.  The handles were very thick to sew, and I may replace the stitches with a rivet, but only if my sister wants them changed. You can see the line matches on the side seam too!

6.  I also followed Tester Kristi's suggestion to turn the bag through a gap at the top of the bag, instead of the bottom of the lining.  I slip-stitched the gap before top-stitching.

I finished it off with a self-covered button in black cord, hand-sewn on at the end.  I'm pleased with the result, I hope my sister is! 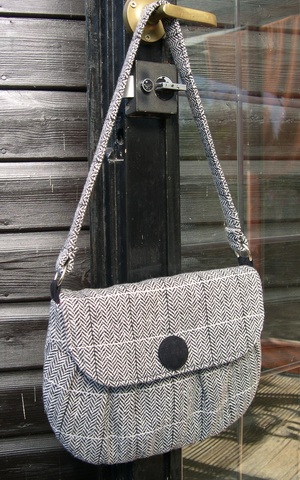 Thanks for the offer Jo Anna, but I delivered it yesterday and she loved it!  We decided it could be her early birthday present!

If your sister isn't happy - I'LL BE GLAD TO BE YOUR NEW SISTER!  Great looking purse!

I like your choice of fabrics and you did a really good job matching everything up.  Thanks for sharing.

It looks wonderful. Loved reading your process as well.

just gorgeous -so "professional" looking.  thanks for your notes during your process -very helpful.

So cute...and that surprise red lining is a fabulous touch!