Back to "Sherbet" Bag 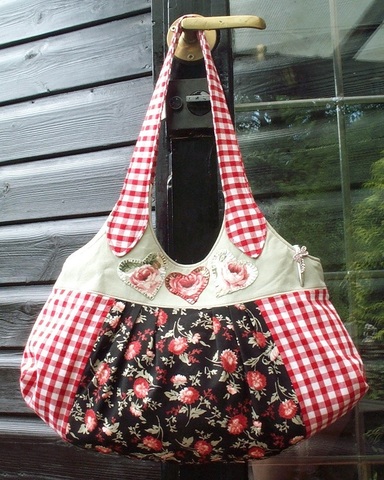 Back in 2012 I fell in love with this pattern when I saw it on  gonetoearthco, and in the end I just had to buy it!  It was my first indie designer bag, and I loved the way you could combine three to four fabrics to make it.  Back then I was also pleased that it just closed with a magnetic catch rather than a recessed zipper as I was a zipperphobic! However even then I couldn't bring myself to do the lining as per the instructions, which say make it exactly the same as the outside, pleats and all.  Instead I made my own lining pattern piece, so I could add slip pockets and a zipped pocket.  I added a D-ring at one end to clip my keys on too which didn't work as my keys dragged the whole side of the bag down!  My sister said she thought it was lovely though, and asked if I could make one for her, but bigger. 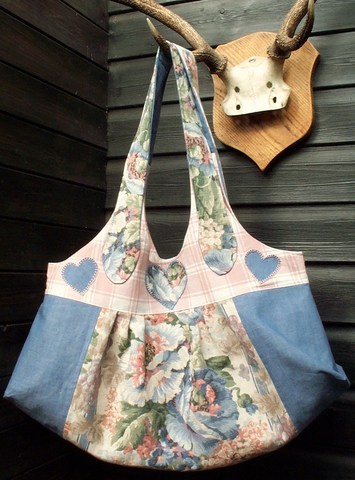 So I tried making it 50% bigger - and it came out enormous!  It made a nice tote though, very pretty, and it went to a good home. Next I tried making one 25% bigger.  This time I made it for winter with recycled tweed, faux suede and corduroy, and remembered to make a slip pocket especially for my little mobile phone, with a velcro flap to make sure it couldn't fall out. Sis loved it, and said it was just the right size, so I made this one for her with herringbone tweed, wool and corduroy.  I thought the buttons and hand stitching on the applique heart added a nice touch. I was happy with my winter bag, so my original version went into storage until the Macmillan's Coffee Morning raffle.   I made the Roses Stow it All specially, but I wanted to add some smaller bags, so the Sherbet was ideal.  The Raffle went well, and one of my friends won - nothing at all!  Sue had hoped to win the Sherbet, and I felt so sorry for her that I said I would make her one specially! It took me ages to choose the three fabrics so I hope she likes my selection;

I used Vilene G700 for the fusible interfacing.  Where a heavyweight fusible was suggested I used Vilene S13 sew-in instead as I had used it for the Essential Wristlets and liked the effect. 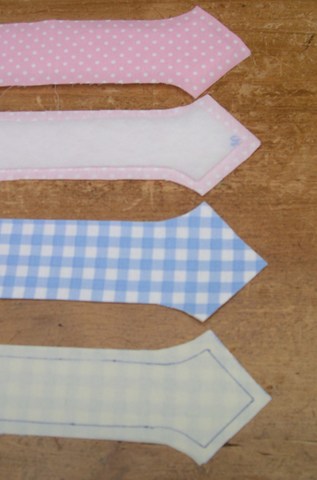 For the handles I used Vilene Decovil Light for the first time, and I must say it worked a treat.  I followed the instructions and used a leather needle.  I added a strip of Vilene Fusible Fleece H640 (medium loft) on the lining pieces.  I drew my own design for the ends directly onto the Decovil with a frixion pen. 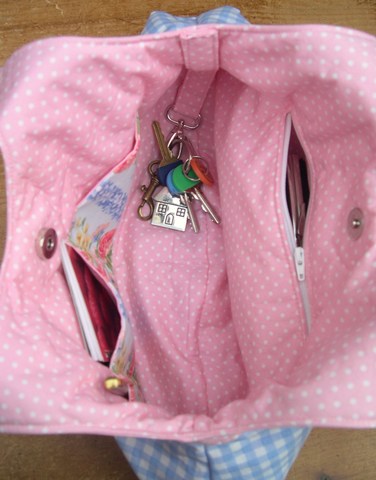 Here's my lining.  I made my slip pocket wider so I could divide it into two pockets, and added a pen slot.  (Note; you cannot put the pen slot in the middle as it obstructs the magnetic catch!). My mobile will fit in one pocket and a notebook in the other.  (Sue said her mobile was small like mine so hopefully it will fit).  The other side has a zipped pocket big enough for my fat wallet/purse and I added a proper key leash which doesn't pull on the side seam!  Plenty of room left for 'stuff'! This is the front, with my scrapbook-look applique.  Going back to the pattern, I was surprised how little detail was given.  I suppose I have been spoilt by Erin, Kat, Chris and Janelle who all give great instructions, including reasons ("we do that later on") tips ("you may like to use spray adhesive for this") and reassurance ("don't worry, this won't show on the finished bag").  I obviously managed to make the bag, several times, but I have added a few 'notes to self' to help me along.  It comes together quickly and is fun and pretty. 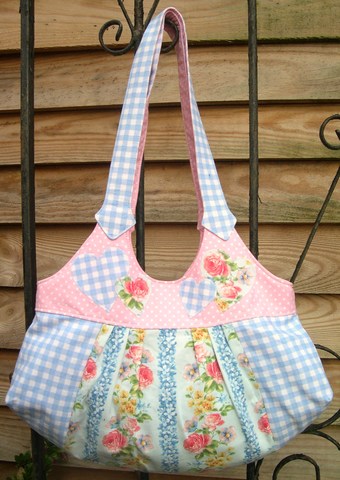 Here is the back.  I am pleased with it, but I had wanted to add little buttons to my handle ends, like I did for Sis.  Unfortunately I could only find three of the ones that would have been perfect in my button jar, so I will have to shop around for some now.

If you do buy this pattern (now available as a pdf) I attach my 'notes' in case you're interested!

Hi Betty - glad you like them.  I have been asked to make another one by someone who has been admiring my sister's black, pink and houndstooth one, so I may have another for my Sherbet Gallery soon!

Love these bags!They are soooo neet!

It is amazing how fabric choices make such a difference.  I often visit the designer's Flickr Pool to see all the variations...  I bought The Quattro (studiokatdesigns.com) because of this version...

though when I finally made it mine was completeley different!

What a gorgeous selection of bags! It's amazing how the same pattern looks so good in different fabrics and sizes!