Bag of the Month Club - January - The Companion Carpet Bag I joined the Bag of the Month Club back in December, for the bargain price of $35, and looked forward to having 6 bag patterns to try out over the next 6 months. I had been reading my Christmas present "Mary Poppins, 80th Anniversary Collection" so imagine my surprise when I saw that the first pattern is for a Carpet Bag.  What a co-incidence! 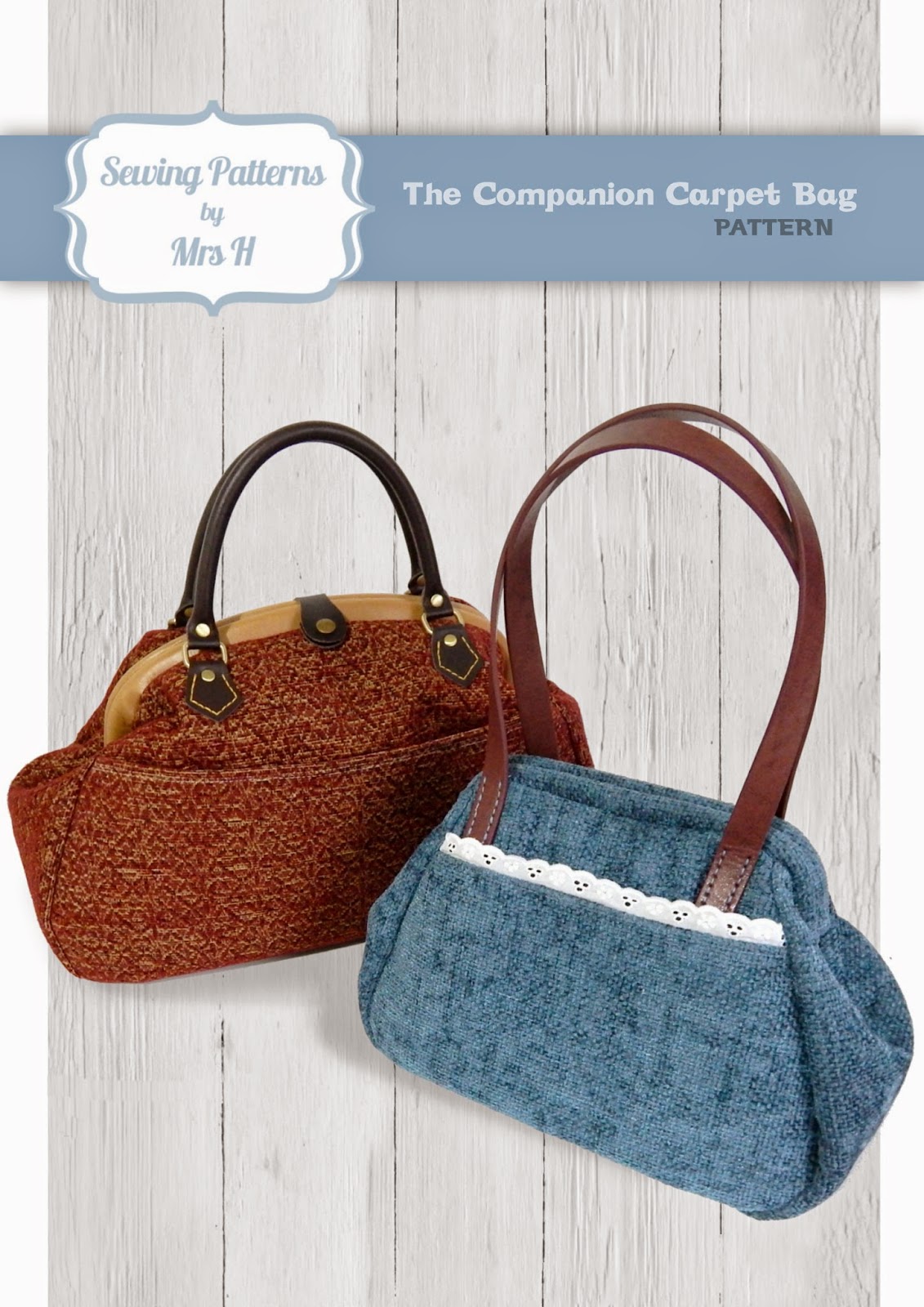 I downloaded the pattern and read all the instructions.  Then I looked at the supplies list, which meant I had to make a lot of decisions - and place quite a few on-line orders.

Decision - which size frame?  The bag can be made for an 8 1/2" or 12" frame.  I settled on the 12" frame which I ordered from 3D's Da Wanda shop (Etsy shop here) as Samantha suggested . As it's coming from Hong Kong it will take a couple of weeks to arrive, but I can make the bag before it arrives as it goes in last. 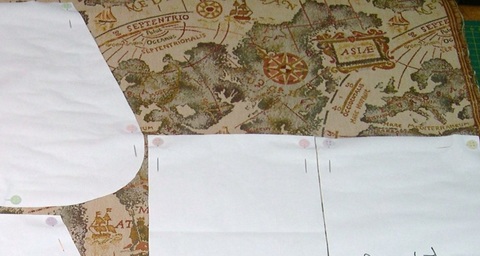 Decision - which outer fabric? I have this remnant of furnishing fabric I really want to use, but when I tried to fit the pattern pieces I realised I would not have enough to make the outside pocket!  I don't want to use a co-ordinating fabric as it would hide the main fabric. I fretted and wondered if it was too late to order the 8.5" frame and wait a bit longer to make the smaller one? Or should I choose another fabric altogether? The Companion Carpetbag by Christine of ChrisWDesigns

Decision - required notions? I was much struck by Christine's use of a metal zipper on her extra zipped exterior pocket, so I ordered myself a 6" antique brass one from zipsonline.co.uk.  This means I won't need the magnetic snap now.  However, when it arrived I decided it looked too small, so I had to re-order the 7" which looks just right! 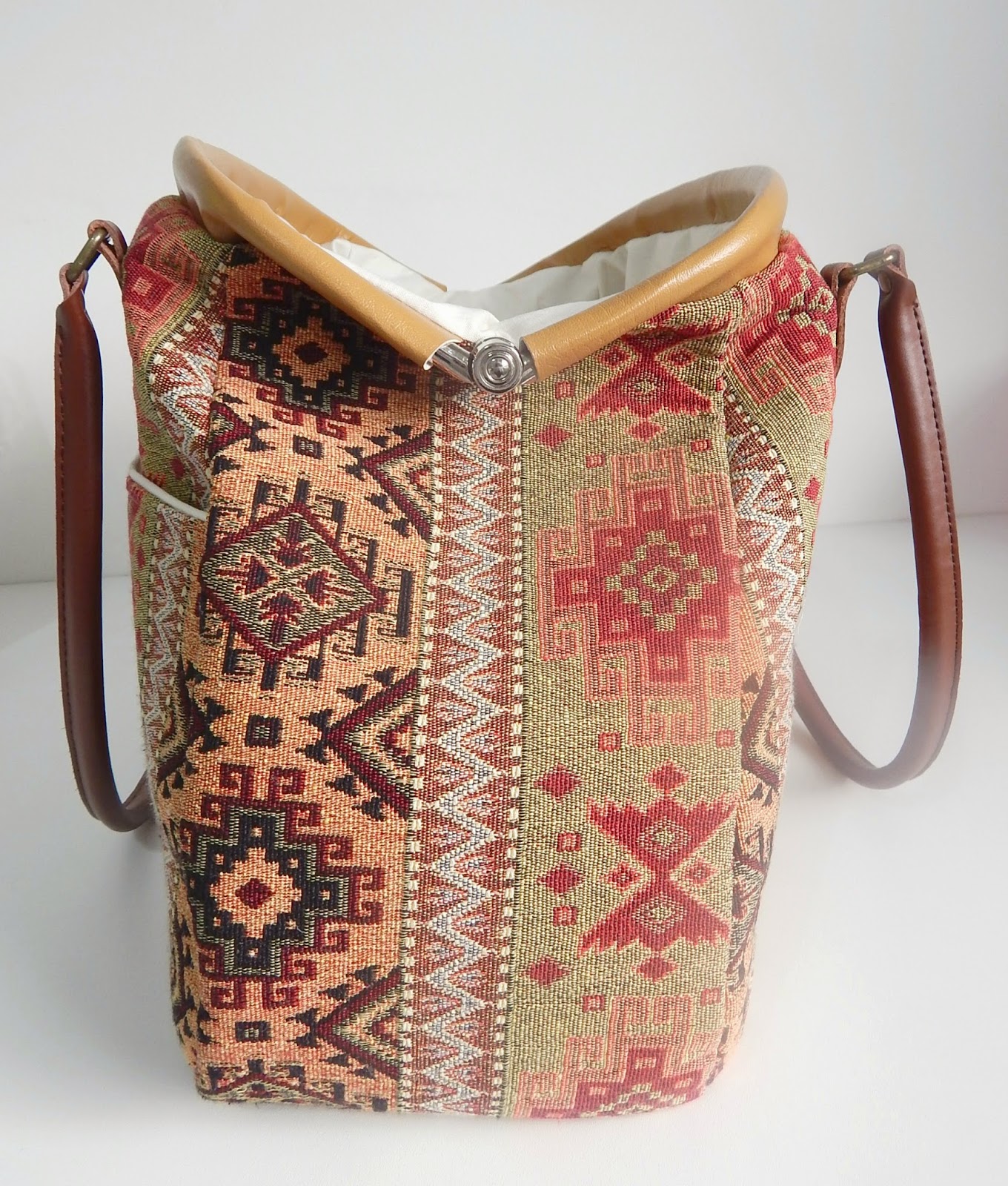 The Companion Carpet Bag for Catrin

Decision - which handles? I had some red leather handles, but when I tried them with the fabric they were too thin and not long enough, so I ordered the same 28" brown ones (from here) that Samantha used for Catrin's Carpet Bag.

My pieced channel - wrong side, right side, and in the finished bag

Decision - which fabric for the channels? My problem is I can't use the outer fabric for the channels, there's only scraps left.  I would have liked to have them match the handles but the faux leather I ordered was completely different.  I considered using some beige faux suede or even corduroy,  but have come to the conclusion I should piece the channels together from the scraps of exterior fabric I have left.  I will stitch the seam allowances down with a zig zag stitch, I should be able to get the frame through.  I hope.

Decision - which lining fabric? I found this fabric in the sale at my local Sew Creative store and snapped it up as I think it's lovely and has just the right "vintage" feel that I want.  That was an easy one!

Decision - which interfacings? I'm using Vilene H630 fusible fleece as stabiliser for the exterior fabric as it's a furnishing weight, with Vilene S320 fusible interfacing.  This is the combination demonstrated here by Nicole Mallalieu

For the lining I've chose Vilene G700 woven fusible interfacing (similar to Pellon SF101) with Vilene H250 fusible for the pockets (mainly because I had run out of G700).  Susie D has done a handy list of Vilene with equivalent Pellon products here which you may find helpful!

Decision - which optional notions? I had some antique brass bag feet, soft and stable and plastic template so the base is all set to go.  I'm not keen on the idea of the leather snap tab.  I had a closure strap on a bag once and it irritated me, so although it would probably look good, I think I will give it a miss.  (The leather probably wouldn't match the handles either knowing my luck).

Decision - more pockets inside?  Bit of a foregone conclusion!  I'm adding a short slip pocket under the zipped pocket, which I will divide into two with a central pen slot.  I've also decided to use a pop of red (everyone's favourite!) by using both a red zipper and some red ric-rac trim. 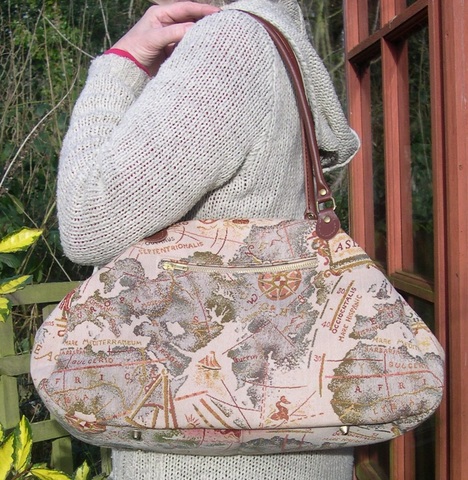 With all those decisions made, I put the bag together, spit-spot!  Big, isn't it. Capacious, as you can see, but not quite as spacious as Mary's! "And with that she took out from the empty bag a starched white apron and tied it round her waist.  Next she unpacked a large cake of Sunlight soap, a toothbrush, a packet of hairpins, a bottle of scent, a small folding armchair and a box of throat lozenges............. seven flannel nightgowns, four cotton ones, a pair of boots, a set of dominoes, two bathing-caps and a postcard album.  Last of all came a folding camp-bedstead with blankets and eiderdown complete....."

Hi Sandra, I'm glad you share my love of sewing bags etc!  I am about to make another Stow it All exactly the same as my red one, but scaled down 15% for my sister, then another City Slicker in Faux Suedes for a friend, followed by one for my niece.

Just visited your blog and added a comment.  If you want to look at simple designs to add to bags, feel free to browse my Photo Albums, I have used all sorts of embroidery and applique on bags and other things that might appeal to you.

Karen, I enjoy your posts about your sewing adventures. I love sewing purses, bags, totes, etc. and am preparing to make a few new ones from some upholstery fabric samples that I was given.

The patterns are released for sale when the 6 months are up, or you can still join now but for $40 (about $6.60 each) and get them all.  I've got the February pattern from Sew Sweetness to work on now!

WHOA what a fabulous article, I literally galloped through reading it. if I could afford the $35 I would give this bag a go. Thank you so much for being supercalifragilisticexpialidocious.:)