My niece asked if I could make her a bag to fit on top of her new wheeled suitcase and I remembered the Take-off Tote sewing pattern by Erin of Dog Under My Desk.  We checked the size to make sure it would fit on the top of her wheeled case, and then went shopping for fabric. She chose a rather nice batik and a plain poly-cotton in a coordinating light jade colour.  Sadly there wasn't enough of the jade but the shop said they would phone when it came in.  Long story short the supplier had dropped that colour so after waiting four weeks to be told that, and another week for me to get samples from online stores which didn't match, she had to shop again for an alternative. 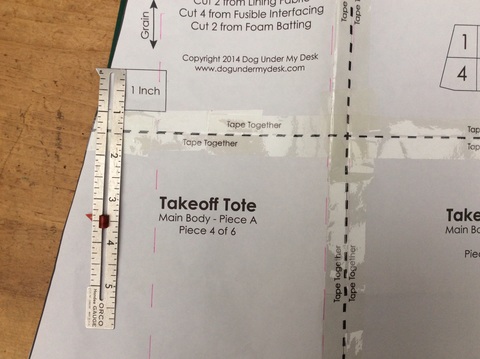 So I was in a hurry to get started when the fabric finally arrived.  I printed the pattern off on my new laptop, which has Windows 10.  The 1" square looked about right and I carried on.  It was only when I came to positioning the straps that I hit a problem, the measurements in the instructions were not possible on my pattern pieces.  Then I double checked the scale, and found there was a small but obviously significant difference in size of about 1/16". (Thank you to Norma on Instagram #normasbagboutique for telling me I needed to load Adobe Reader to solve this!) After some heart seaching and testing the sleeve would fit the handles of the case, I decided I may as well finish the bag even though it would end up a little smaller.  I had little choice as there was not enough fabric to cut another bag!  Happily having made a few adjustments to the measurements it all came together well, Erin's instructions being as thorough as always.  I did start to put the zipper in upside down but as she included instructions to check it I realised my mistake in time! I added a zipped pocket and a key fob to the inside, as my niece wants all the help she can get with being organised, but otherwise it was as designed.  The zipped top clears the bag so it can open fully, and I chose to add a hard base in the sleeve Erin provides, using some some Simplicty Ez Quilting extra thick plastic template. 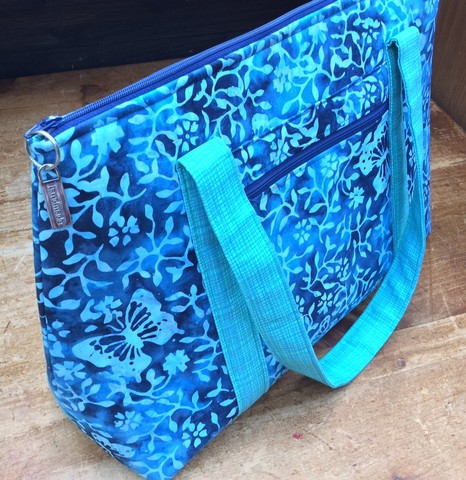 The finishing touch was a 'Handmade' zipper tag in shiny nickel by Emmaline Bags.  I bought a pack of  ten, and I noticed that there is a better quality hook on them now.  I fitted my tag to a key ring as it is handy for pulling the zipper and more reliable than the original hooks. The only other issue I had was with the foam interfacing.  I have always used ByAnnie's Soft & Stable that I buy at my local patchwork & quilting shop.  However it is now under new management and they are selling the new Vilene product, Style-Vil instead.  When I opened the cellophane pack I was immediately struck by the horrible smell of chemicals!  I hung it out to air and my sewing room stunk for at least 24 hours before it gradually diminished. 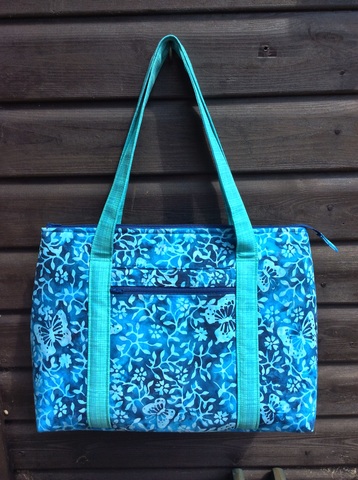 I must say I am really pleased with the end result, it's very pretty and a good match to the case, a nice size to carry and able to carry quite a lot.  The foam stabilizer means it stands up by itself and is nice and spongy to the touch.  You know you have a good product when everyone else starts copying it Annie! 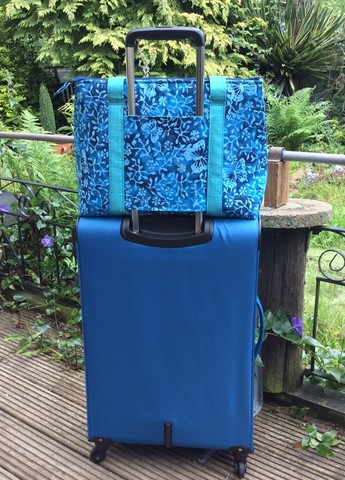 Despite being fractionally smaller it fits the top of the case to perfection.  I actually reduced the size of the sleeve from 8" wide to 7" wide as it still slipped on easily and put the straps in a better position on my smaller bag.  As I still had enough fabric left I decided to make some coordinating extras. This is my niece's first trip abroad with her two teenage daughters so I looked for something that will help her keep the passports and tickets organized and found the Up Up and Away Passport Wallet epattern by Liz of Moments Designs. 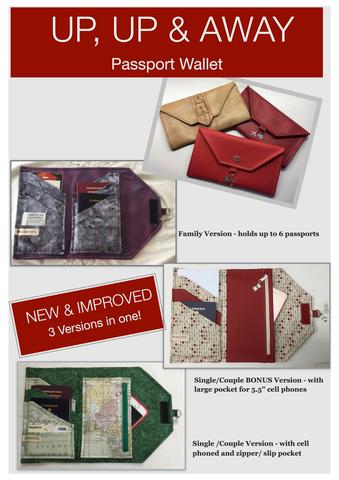 I know of Liz from her blog Moments and as a tester for Chris W Designs who loves faux leather but now she is designing her own patterns.  I wanted to use the same cottons as the Take Off Tote, but have the heft of faux leather, so I asked Liz if I could use Vilene Decovil.  She replied that no-one had tried it as it would make the wallet very thick to sew, and suggested I inserted it at the end of construction instead of fusing it before assembly. 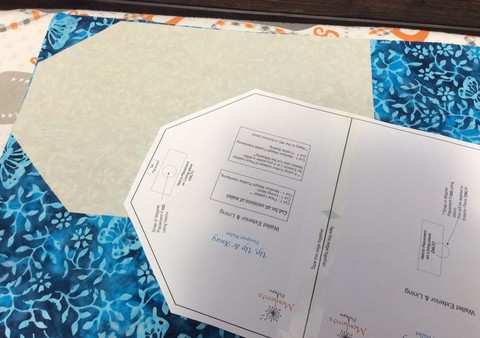 I thought about it, as I hadn't considered how thick the pockets might be and decided to use Decovil Light instead as I had some of that too, and it would not be so thick but still give the supple support and 'body' I wanted.  I fused it on as normal before construction and it worked perfectly, no problem at all to my sewing machine, so I let Liz know in case anyone else wanted to try it. 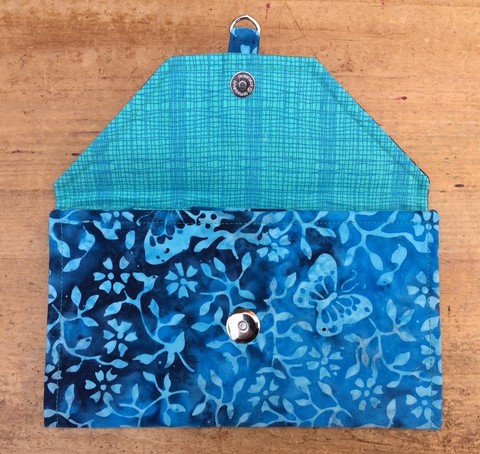 I had chosen the option of adding a magnetic snap instead of a velcro strip, and used an extra thin version from Bobbin Girl to keep the whole thing nice and slim before it gets filled with passports and tickets. I didn't have a charm to add to the d-ring but it is useful to pull on to open the wallet as the magnet is quite strong.  I'm sure my niece can add one! 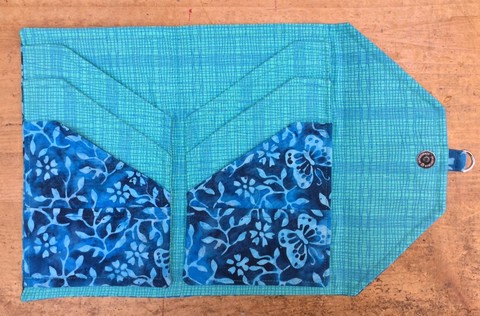 I made the original 'family' version.  It is not that easy to see on the batik fabric, but there is a card slot on the bottom on both sides as well as the three slots for passports and/or tickets on each side.  The instructions were very clear and easy to follow and the results look great! Here they are together.  If I had made the the wallet first  I may have tried adjusting the interior slip pockets to fit the wallet more snugly, but it does fit.  Now I have one other little project to add to complete the ensemble, a luggage tag for her suitcase! 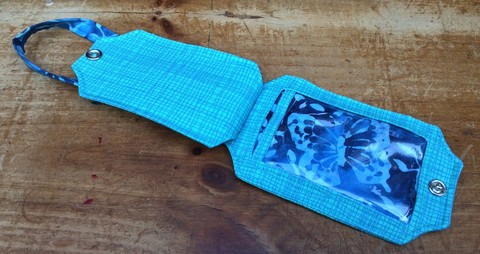 I bought the "Just the Ticket Luggage Label" by Uniquely Michelle, also on Craftsy, as it had a great shape, a good size pocket to insert a card with address details AND a flap to keep that private, with a no-sew snap to keep it closed. Michelle includes instructions to add a fussy cut backing to the clear ID window so it looks good even when empty which is nice attention to detail! 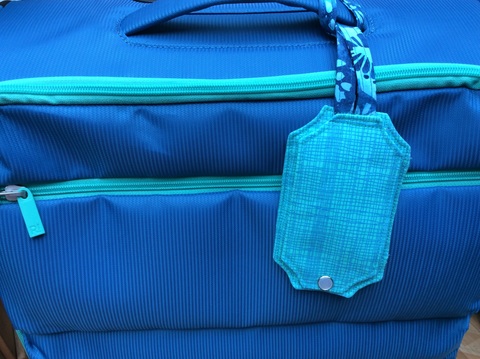 I used a Prym Mother of Pearl snap fastener. The hanging loop is long enough to go through the handle of your case and then the label goes through the loop - no ties that could come undone in transit, another good design feature!  On it's own it looks a little plain, but it shows up well against the case and that's the idea after all!  I suppose I could have added a monogram of her initials as my new Janome MC6600 Pro can do that, but it didn't occur to me at the time! 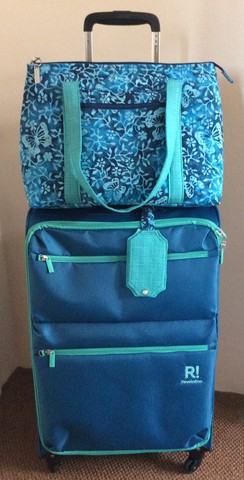 All done.  I will deliver her coordinating luggage ensemble this week, and I hope she will be as pleased as I am!