One of my nieces asked if I could recover her old Laundry Bin for her.  She had removed the old tatty one and was left with a wooden frame with flimsy balsa wood panels (which flaked everywhere) and a hinged chipboard lid.  She didn't know what to do with it, so she asked me to have a go.  I'm afraid I didn't take a picture of it before I started work on it, sorry! In my recycling stash, I had this old patched car blanket and pretty floral curtain.  I decided to use the blanket as interlining and the curtain for a new cover.  I cut the blanket into a strip big enough to wrap round the bin, and added an inch all round for seam allowances.  I ran it through my overlocker to prevent it fraying, stitched a seam and wrangled it on.  I will staple it in place at the top and bottom.  That softens the edges and seals in the balsa flakes! When it came to the lid, I used some fleece remnants to interline it and give it a nicer "feel".  I cut one piece to exactly fit the top, and glued it on, to pad the top.  I cut a second piece and added 3/4 inch all round then pinched the corners to fit and cut off the excess fabric.  I fitted it right over the first piece and then hand stitched the edges together all the way round.  Now I had much smoother surfaces to work with than chipboard and balsa. 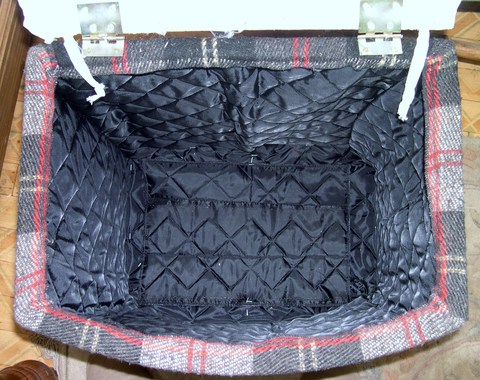 For the inside, I used some quilted fabric left over from making the bag for a Cigar Box Guitar to interline it.  I stitched a seam, slipped it inside then stapled it in place around the top and bottom frame. I used the last piece left to make a pad for the bottom and stapled that in place on either side.  The original inner lining bag was still in good order, so I will put that back in.  It is held in place by velcro fitted around the inside of the frame (which was holding the blanket in place in this photo, prior to being stapled around the top).  You can see the two old cotton straps here.  They will have to go too! 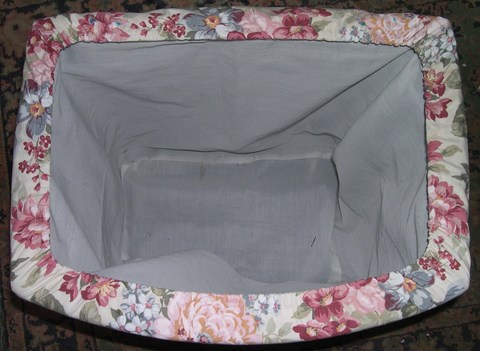 I used the curtain to make the cover.  I added an inch to make a hem to tuck underneath the box. For the top, I added a couple of inches to cover the top frame plus another inch to make a casing for elastic.  The elastic pulls the cover in, over the top edge so it hides the blanket.  This shows it with the original lining bag back in place.  It is white though it looks grey here because of the black padding.  (Yes, I could have made a new pink lining but I didn't).  I have marked the positions of the screws for the hinges with a water soluble marker. To cover the lid I cut a top and bottom with 1/2-inch seam allowances, and a gusset strip 3/4 inches wide plus 1/4-inch seam allowance to neaten the ends.  No, I didn't attempt any pattern matching!  Typically, the only marks I found on the curtain were on the piece I had cut for the lid!  Never noticed it until I started to fit it!  To disguise them I added some butterflies with free motion stitching, as it was quicker than my usual zig-zag. 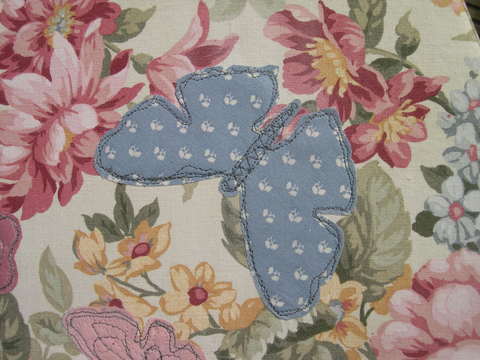 To do this, I dropped my feed dogs and fitted my Darning foot.  I used grey thread on the top and cream in the bobbin.  I hooped up using my narrow Madeira hoops.  I was taught to pull the bobbin thread to the top where I can stitch over it a few times and snip it off, so it doesn't get caught up underneath.  I have the speed control on my Janome DC3050 and have NEVER used it flat out. For this, I usually go about half speed. 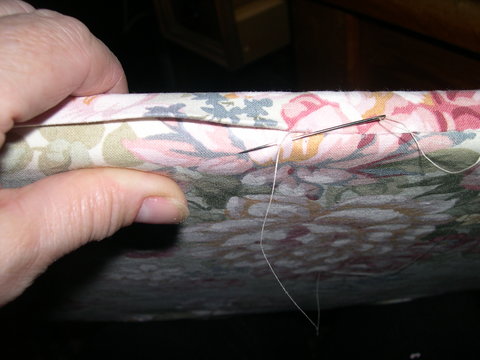 Then I pinned and stitched it all together, leaving the back open. I trimmed it with pinking shears and turned it right side out.  I pressed under 1/4 inch of the raw edges to neaten the top and bottom (but not the gussets).  Once the lid was fitted inside, I folded the gusset ends in, then the bottom seam allowance up, and the top seam allowance down, and pinned it.  I used a slip stitch and hand stitched it shut, then marked the positions of the screws for the hinges. 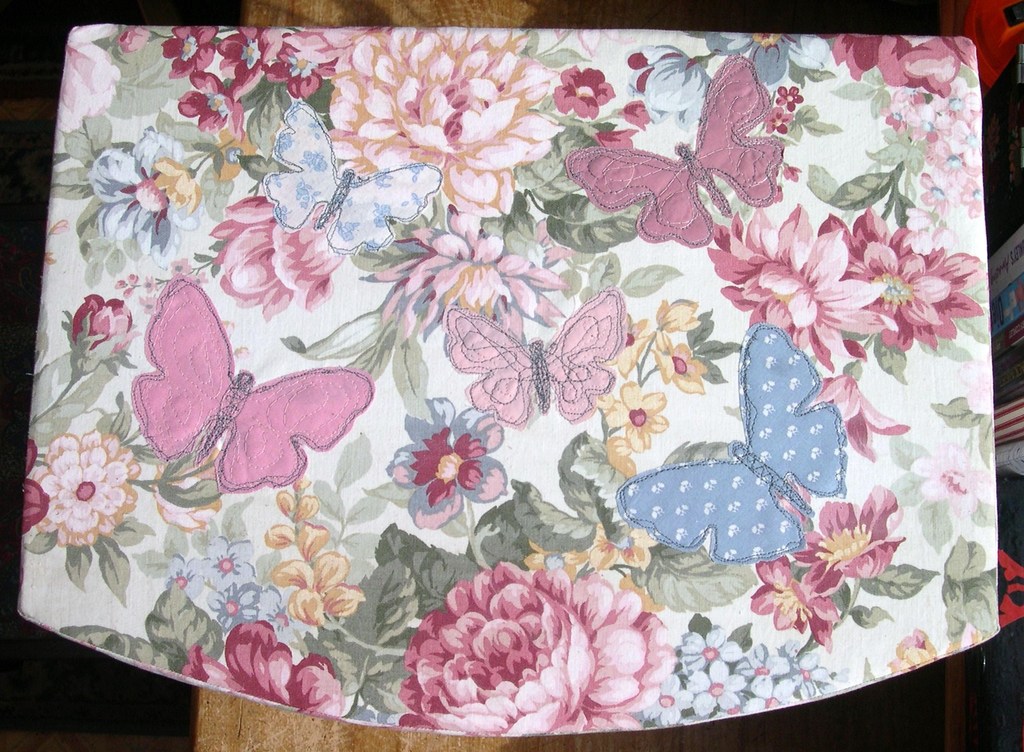 The finished lid.  I think the butterflies work rather well, I took time finding colours that would blend and be subtle rather than stand out.  The last job was putting the hinges back on, and replacing the straps that stop the lid going back too far.  I could have sourced some pink braid to glue around the lid upholstery style, but I wanted my sewing room back! 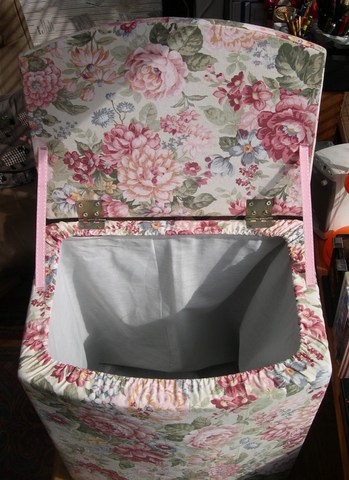 Screwing the lid back on was easy as I had marked where they were.  To replace the straps I used some pink grosgrain ribbon, added Fray Stop to the cut edges then turned them under 1/4 inch and stitched them down. Then they were stapled in place.  I do love my staple gun! 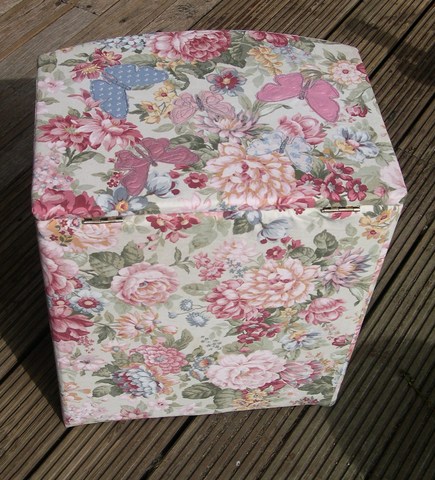 The finished box from the back. From the front, fresh and ready to use again. 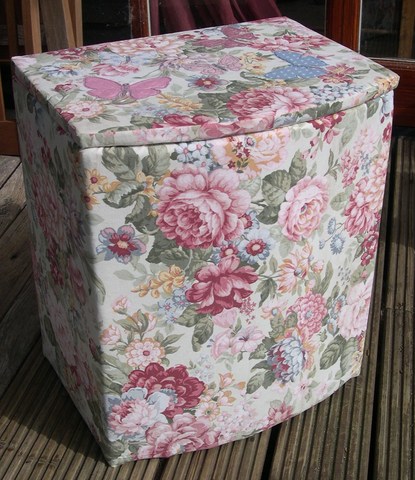 This laundry hamper is much prettier now, and it was so much more fun than doing the housework!

Very fresh and pretty.  Good for you!

It really is lovely.  Karen is someone who can almost ALWAYS make something beautiful out of what she has on hand!

Clever and lovely! You saved a large item from the landfill and even made it beautiful.