Most emerging designers can only dream of having a built-in following before they unveil their first collection, but at an early age Emma Lewis was already crafting creations that resonated with fashion fans. So when the Toronto sewing studio
Sew Be It Girl decided to start a clothing label for teens, it didn't take long to settle on who would be the first designer. 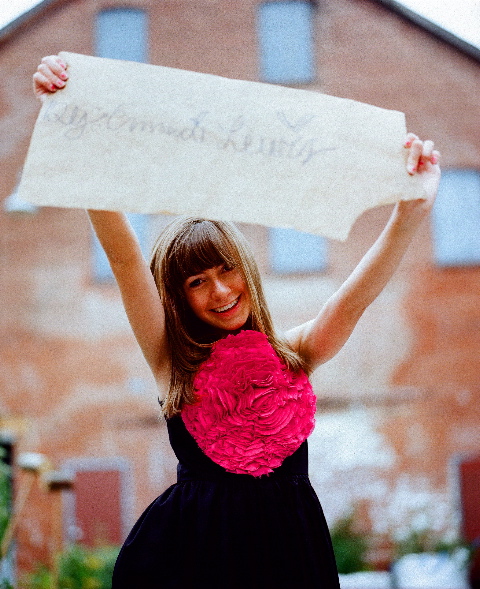 "Emma was one of the reasons that kind of helped us to inspire the idea because every time Emma makes a dress, everybody wants to buy it," said Dilys Tong, co-owner of Sew Be It Girl. Lewis, 15, started taking classes at age 10. She initially attended the odd sewing camp at March Break and during the summer, but that ramped up to weekly classes where she expanded her skills and learned to draft patterns from scratch....
continue
About Sew Be It:
Sew Be It Studio is a Toronto-based company committed to promoting creativity from the art of sewing and fashion to knitting and craft. Lead by a team of experienced professionals, the studio offers an array of classes for all ages, genders and levels of expertise. Dedicated to the professional advancement of students, Sew Be It Studio also offers an affiliate program with George Brown College’s School of Fashion Studies. Sew Be It Girl is the sister location to Sew Be It Studio. Toronto’s first sewing studio dedicated only to tween and teen fashionistas, the studio offers a vibrant atmosphere with fun-filled lessons promoting creativity and self-expression. Sew Be It Girl hosts year-round classes and workshops as well as March Break programs, summer camps, fashion events and private parties.
About Emma Lewis:
Emma Lewis began sewing at the age of 10, shaping her fashion career over several classes and workshops at Sew Be It Studio. Launching her own collection as part of the Sew Be It Girl Label at 15 years of age, Emma is currently balancing her time at The Bishop Strachan School while continuing workshops at Sew Be It. An all-around artist, Emma also enjoys dancing, acting, visual arts and singing. Inspired by designers like Jeremy Scott, Marc Jacobs and Sarah Jessica Parker, Emma has already developed what she describes as a fierce, feminine and edgy personal style that she hopes will inspire other teens her age. Emma’s future aspirations are to attend Parsons School of Design in New York – as well as Paris for one summer.

Comment by Vee on January 4, 2010 at 1:14am
I am glad for her. I started sewing at age ten and watched my mother. I have self taught myself since then and that is how I am making my money now that I have retired .

Comment by Meagan on January 3, 2010 at 9:58am
I truly wish I had had something like this when I was 15. My mother was a very good seamstress but teaching was not her forte...("you just kinda go"). I had a little too much fear to really start sewing until I was old enough to take classes at the local community college on my own. Great idea, wonderful work, congrats Emma!

Comment by JUDY on January 2, 2010 at 7:16pm
It is good to see places like Sew Be it Girl opening up to the younger generation. I teach fashion design in our Secondary College VET program and the number of teen girls aged 16 - 18 who enroll in these classes is astonishing. We need more places like Sew Be it Girl. Thanks for sharing and maybe we can all encourage more teens to sew.

Comment by christine on January 2, 2010 at 2:14pm
I'm glad to hear that our younger generation is learning and taking up this art. I'm in the process of teaching my 10 year old step-daughter the art of sewing and making her own clothes. I'm glad that the younger generation has the age of computers to show their work and make their mark in the world. I know that Emma will go far in this world of Sewing...thank you for showing this younger generation to us.

Comment by Larri on January 2, 2010 at 8:21am
It's so exciting to see a younger generation take interest in sewing. Emma is a girl to watch for in the future. She will make big changes to the sewing industry while inspiring others in their stitching endeavors. Thanks for sharing!