Back in 2012 I bought a couple of StudioKat's bag patterns, The Quattro and The Lollapalooza, because I liked the look of the pieced versions. It took me two years to get around to making this pieced Quattro (The Quattro (Studio Kat Designs) at last!) and now a year later I have finally got around to making the Lollapalooza.  I'd forgotten how much I liked Kat's hand-drafted pattern pieces with lovely hand-written labels.  I'd also forgotten how organic her patterns are, not rectangles and corners, but curves and pinched fabric pleats. 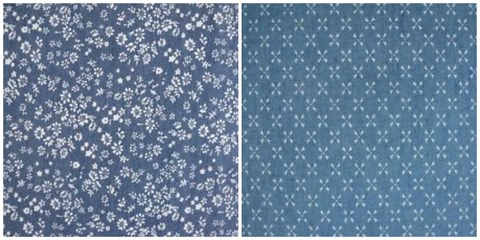 After the usual hour long session of sitting on my sewing room floor surrounded by bits of fabric, I decided I would use my newly acquired lightweight printed denims, more like a Chambray really!  I'm making the pieced version, so I recycled some thin denim jeans for a plain to alternate with the patterns.  For the lining I chose a piece of quilting-weight cotton with pink and white stripes and denim blue flowers.  I used it once before in a denim bag so I know it works well. 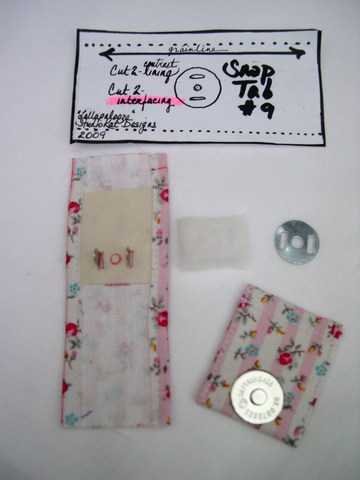 Sadly most of my sewing is done at night now, and the lighting is so bad I don't have any photos taken of the construction except this one of the snap tab, where you can at least see Kat's lovely writing on the pattern piece! I took these photos today at my dad's house at the seaside.  The sun was out briefly so I rushed out and snapped these.  Sadly my fabric doesn't look as crisp as Kat's bag, and I think another time I would be tempted to try and use some Soft & Stable for the yoke at least. 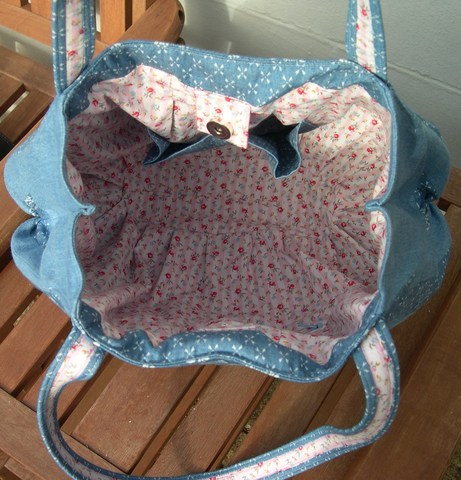 The inside showing the pretty fabric, more pleats and the underside of the straps.  I did add a zipped pocket inside as well as the two slip pockets included in the pattern.  It was the ONLY thing I did differently! 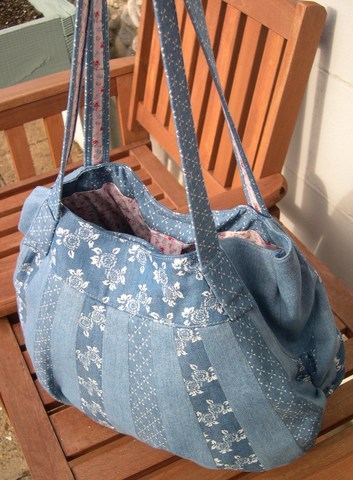 I confess that I thought the ends of the bag were open, but Kat has added what she calls a 'vent'.  My sister doesn't like bags that are smaller at the opening than at the base, so she won't want one, but I'm happy!  I would have liked some buttons to decorate strap holders but I didn't have anything to hand.  I may add some at a later date if I find some I like. So there you have it, my pieced Lollapalooza in lightweight denims.  Here I am modelling it so you can see the size, and how pretty and curvy she is! Maybe it was my fabrics but my version seems much more 'slouchy' and relaxed than the pattern pictures.  That's not a bad thing, just an observation!  Sadly I didn't use anything from my stash except the lining.  I often find if I want to combine 3 fabrics rather than 2 I have to go buy the 3rd one!  On the Quattro I just used everything my mother left me that was big enough, and it worked out well.  She obviously had a better co-ordinated stash!

I loved your choice of fabrics and the fine sewing job.  At first I never liked this purse because it looked small.  I am so glad you showed it on your shoulder.  I will actually consider this bag now.  I am like you though.  Need extra pockets.  May have to try the quattro.   I started quilting this summer and if my husband knew how much fabric i actually bought this summer I would probably get an eye ball.  But he never says anything because he knows how much I love to sew.  I tend to ramble, but I have lots of batiks that would be great to piece together.  Thanks for the share!  Love your blog.  I have a folder in my email with all of your newsletters.

I love it-I am w/ your sis I don't care for bags w/ a small opening or no pockets inside but its still cute-good job.

Your comments are very helpful...sometimes it's hard to know if a bag will truly suit your styling and function needs.

Thanks so much for sharing so much and your wonderful creation too!