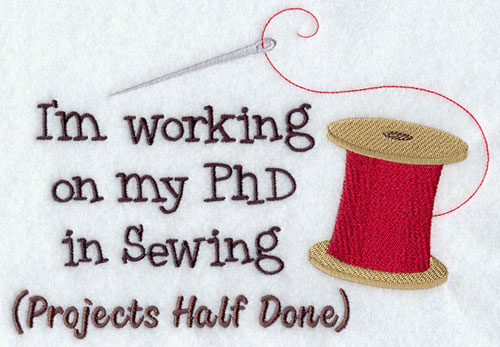 Last year I had six Projects Half Done, and made a resolution to finish them all within the year.  I failed.  I only finished five of them, and left the oldest sewing project languishing in the bottom of my workbasket yet again. It is this pink tulle net petticoat from Butterick 4788.  I wanted to make one to replace a ready-to-wear petticoat that has seen better days, and have this unused pattern in my collection.  When I went to buy fabric, the only slinky jersey with matching soft tulle net was in a dusky pink, and this is the best match for the yards and yards of trim it said I needed.  I planned to make the 'short' version A. It's a year down the line and I have more experience with sewing knits and using my overlocker, so I decided it was time to tackle it!  I threaded up my overlocker in pink and tested my stitches.  Then I assembled the jersey bodice sections.  As this is construction rather than seam neatening, I used a four-thread overlock stitch, and just needed to adjust the differential feed down to stop it from gathering the jersey up. When it came to joining the tulle netting panels (two fronts and two backs) I am dismayed by how thin it is!  I had another look at the pattern.  I am supposed to add a ruffle, made up from eight huge panels which have to be gathered and trimmed.  I decided I would sacrifice the extra length in favour of modesty, by creating a double layer of tulle netting! I cut another four tulle panels, sewed them together and then attached them to the first layer across the top.  Much better, not so transparent, heavier and pinker.  To prevent bulk in the seams I pressed the seam allowance to the front on one layer and to the back on the second layer. 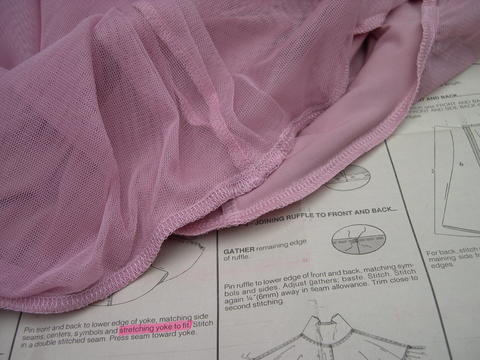 Here is the inside with the seams all matched up and overlocked.  If I made it again I would lengthen one or both of these pieces by a couple of inches, but still do a double layer of tulle net as just one layer was pathetic in this.  It might work with a heavier tulle net I suppose. 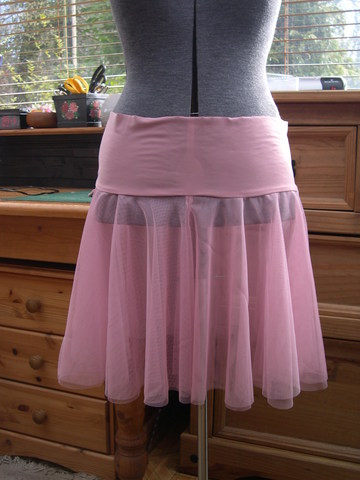 I need to level off the hem, and finish the waist.  On the pattern you turn down the top by 1 1/8" to make a casing for the 5/8" elastic.  I would have liked to try just turning it down by 1/2" and attaching elastic with the tricot stitch, which is how the RTW version was made, rather than a bunched up casing.  However, as I'm not adding the huge ruffle on the bottom, I don't really want it any shorter than it is, so I'm going to attach a casing for the elastic instead. I cut another waistband piece, half the width of the waistband pattern piece, and folded under 1/4" either end and stitched it down with a little zig-zag stitch.  Then I folded it in half lengthways, machine basted the edges together, and attached it to the top of the waist with the overlocker. 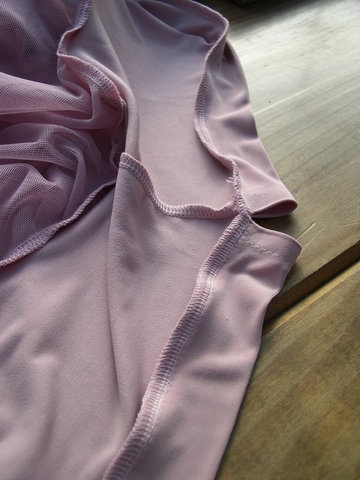 All ready to insert the elastic, but not the 5/8" suggested in the notions list.  I used 20 mm wide (about 3/4") knit elastic instead and it fit perfectly and stayed flat.  I pulled out and overlapped the ends, sewing them together with a boxed cross. 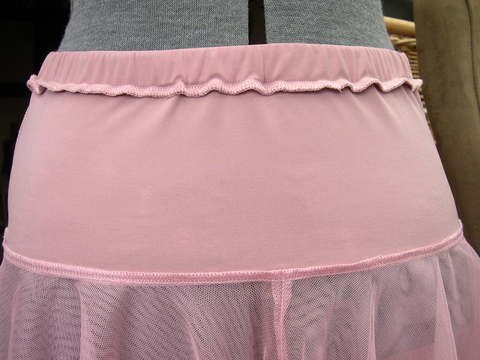 Here is the inside view of the new casing with the elastic inserted.  The seam naturally turns down, whereas the seam with the net naturally turns up.  I wonder if I could use three layers of tulle?  Or 4? The last job was finishing off the hem, as it wasn't quite level.  I had no intention of adding the lace trim suggested in the pattern, instead I have trimmed it with my scalloped pinking shears!  (I read about them in this article about scissors by Larissa Holland of mmmcrafts.blogspot and bought some from China on e-bay) Such a pretty effect! 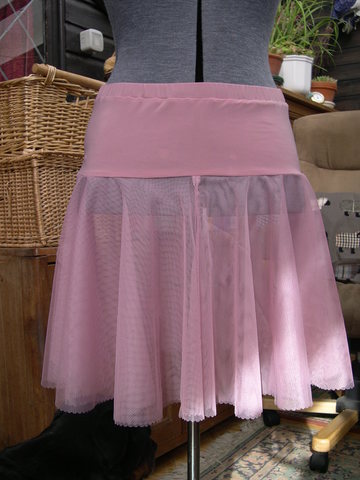 It doesn't look anything like the pattern of course, but now it's done and I can wear it.  I can't think of why it took me so long to get around to it!