Finished My Craftsy Design it, Stitch it Hand Embroidery Class!

Well I have finally finished my last project for Jessica's course.  We had to design our own embroidery and she suggested using a photograph.  After a visit to the attic and a lot of dithering I settled on the Kingfisher. 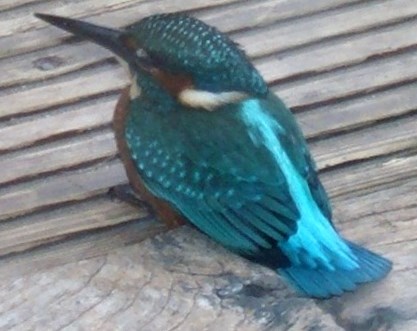 I was sat at the computer one morning, and heard a thump at the french window.  When I looked up, there was a Kingfisher sat on the verandah outside.  For whatever reason he had flown into the glass and knocked himself silly, so he sat there for a while until the world stopped spinning, then flew away.  It was just long enough for me to take this photograph! 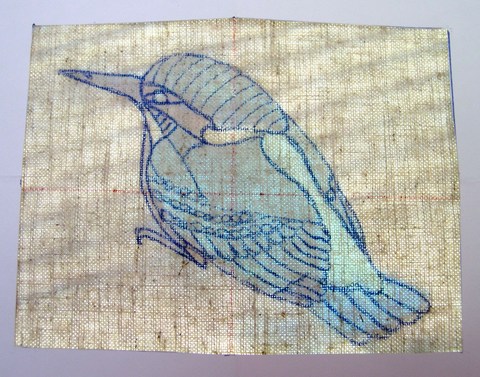 So with that decision made, I got out my lovely new light box from it's lovely Gadget Guard and put it to work!  I traced him, dividing him into different areas according to colour, directly onto a piece of natural linen using my Frixion Pen (it's heat erasable). 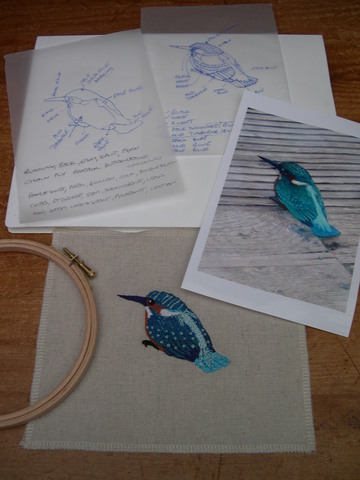 Then I got out my Anchor embroidery floss collection and chose the colours to use.  I stuck to stitches Jessica had used and tried to divide him up into areas according to the colours.  I started with the White, Black and Brown, then moved onto the blues.

I am sticking to the stitches and their variations that Jessica introduced on the course; 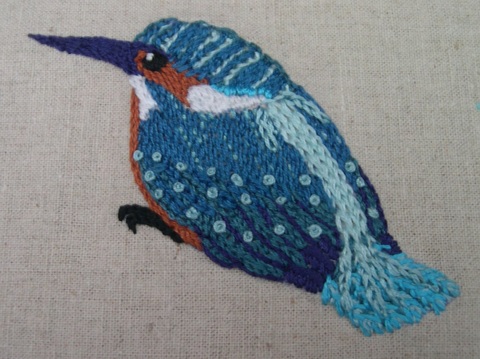 Here he is.  I ended up layering the stitches to get the effect I wanted.  Some things I tried I ended up unpicking and changing.  I'm pleased with the end result, but a bit at a loss as to what I can use him for? 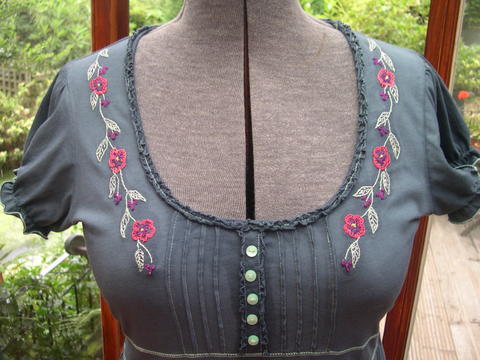 Then I had a message from a Flickr Group, wanting to know if they could add the pictures of my "Embroidery on Knit" neckline to their site.  Of course they could!  I was flattered, and went to look at the other pictures in the Group.  That lead me to their blog "Feeling Stitchy", and there I read about Craftster "hosting another round of its famous Hoopla Along. This month's theme is anything whimsical, nonsense or free range stitching".  Which made me look at my Kingfisher in a new light! 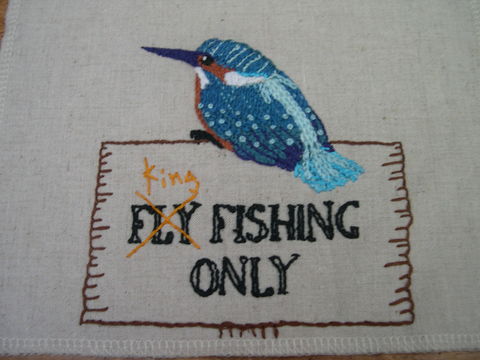 So I popped him back in the frame and added a bit more; I adapted a "Fly Fishing Only" sign and printed then traced it on using the light box again.  I think it turned out rather well! It is definitely whimsical.  I decided to frame it, unfortunately without taking a picture of it in the hoop, so I don't know if it is actually eligible for the Hoopla Along, but I am happy I found something to do with it! LOL of course you can borrow my Kingfisher, but I want to see the result!

I have actuallyt put him back in my embroidery hoop as I am not happy with how I did his tail!

Your King Fish is very beautiful.  Your use of the various stitches and colors is wonderful.

May I borrow your kingfisher for practice.  I just bought a free motion embroidery from Craftsy and I love your birdie.

That is awesome! I am not one for things on the wall so I would have probably put him on a tote/purse.

I should take that class. I have embroidered all my life but never taken a class. I am sure I could learn a LOT, LOL!