A new florist opened up locally (Flowers at the Forge ) and supplied a lovely basket arrangement for MIL's Mother's Day present.  We got talking and I showed her pictures of the cushions I had made for MIL's birthday and the ones I had done for the Hall with their logo on, and she asked if I could put her logo on a couple of cushions for her. I agreed to try, and she gave me her business card with the logo on to work from.  On one side of her card the background is white, and under a bouquet of watercolour flowers there is a horseshoe, for the old forge that used to be in the building.  I copied it larger, cut off the other details and enlarged it again to get the size I wanted. 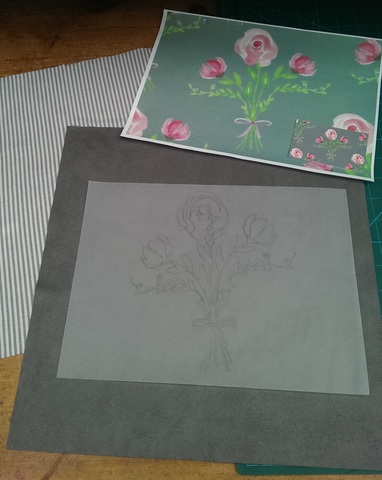 On the other side of her card the background is grey, with just the bouquet of pink flowers tied with a pink bow.  This time I only had to enlarge it x 400 to get the size I wanted.  Then I traced both designs so I could reverse them to trace the component parts onto Bondaweb (Wonderunder) to form the applique. I had some grey faux suede and grey and white stripe cotton from a bag I made a while ago I wanted to use. As the grey faux suede was quite dark I started with a white base for the flowers, then put the pale pink on top.  The stems and leaves needed a very small zig-zag stitch, 2.5 wide and .75 long and were quite fiddly to say the least! 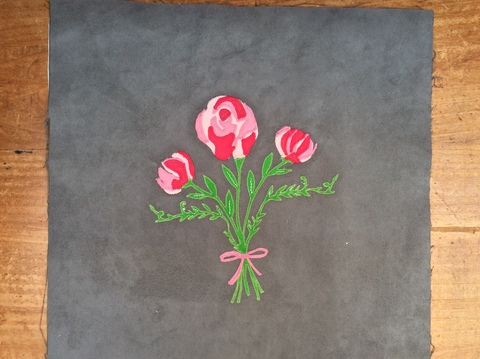 Next was adding the bow then layering up the flowers with different shades of pink, interpreting the watercolour swirls as best I could and stitching them on with a tiny zig-zag stitch.  I hand embroidered some of the lines on the leaves. When I was happy with the bouquet I added the zipper, using an extra long one I had in my supply tin and cutting it to length.  Then I stitched the other three sides to form the cover. 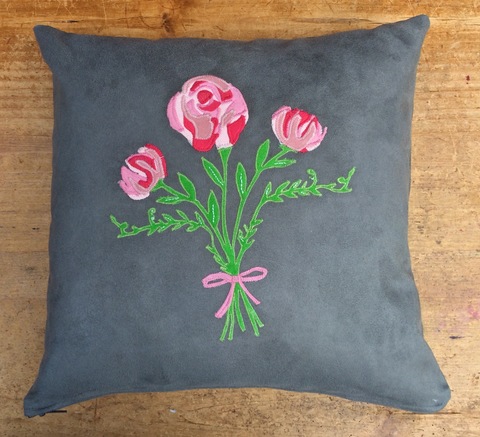 With the first cushion completed I moved straight on to the second version.  As I am using the grey and white striped fabric I didn't bother with a white base this time and started with a pale pink base. I used some of the grey faux suede for the horseshoe, and the bouquet was put together in the same way, but without trying to make them exactly the same.  Stitching round the nail holes in the shoe was quite fiddly too! 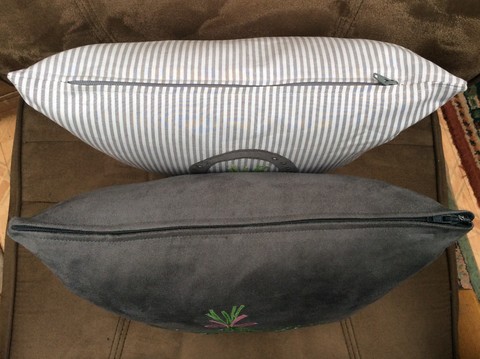 Once again I had a matching grey zipper in my stash but this was a shorter one.  I think it gives a neater finish, but it was far more awkward to get the cushion pad inside that it was with the full width zipper on the other cushion!  These cushion pads always seem to be overstuffed in the middle, and I spent some time trying to manoeuvre the stuffing out into the corners, to stop them crumpling up and thinning the centre.

With the second cushion completed I decided to have a go at printing my own labels.  I have been meaning to do this ever since I read Janelle's tutorial on her Emmaline Bags Blog.  As I don't have Photoshop I used the free downloadable software for my business cards, and simply put some printable calico through instead of a sheet of the blank cards. I liked the 'rustic' look of the calico rather than white cotton, and purposely frayed the edges a bit after stitching them inside, along the zipper tape.  I am quite pleased with the look, but I fear they will fade away when washed. 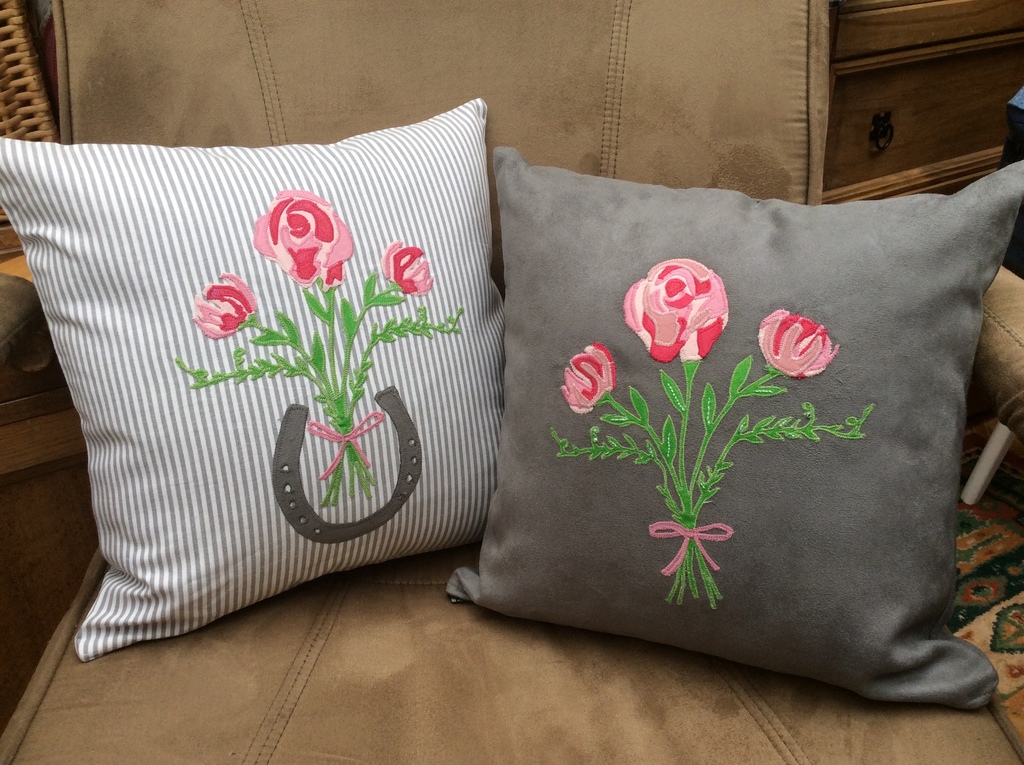