My MIL will be 87 this birthday, and I decided to embroider her a cushion.  I had already bought this "Summer Gypsy Cushion" pattern from Bustle & Sew and thought that would be ideal.  I couldn't get my hands on a pale green stripe, but I had a piece of pink stripe for the embroidery background.  I cut out the pieces, and fused Bondaweb/Wonderunder on the back of the pot and leaves. 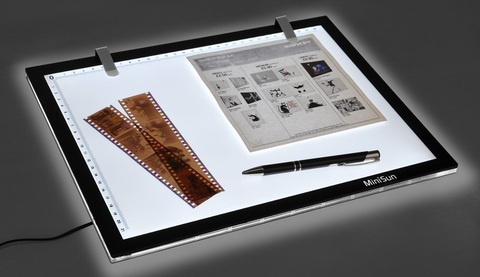 I cut the required 9" square and added some fusible woven interfacing to the back as stabiliser. However when I transferred the pattern (I used my A4 mini sun Light Box from Amazon and traced it with my frixion pen) I found either the pattern was too large or the 9"square was too small as there was not as much space around it as in the pictures in the instructions.  I debated re-printing the pattern scaled down or cutting a larger square but decided to stick with it as I liked it this big. 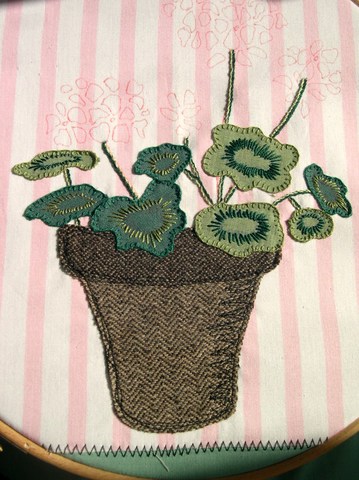 I had a nice tweed remnant for the flower pot and used the wrong side of the tweed for the rim. Once I added free motion machine shading as per the instructions I was really pleased with the effect!  I fused the leaves in place (managing to avoid erasing my Frixion markings with the iron) but when it came to hooping, the nine inch square was too small for my hoop.  I decided to attach it to the 16" square I had meant to use for the front with a zig-zag stitch, then hooped it up and did all the hand embroidery. 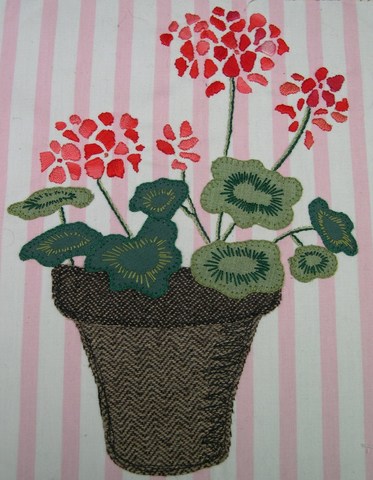 I chose to use buttonhole around the leaves to suggest the frilly shape of the edges, straight stitch for the markings, and of course stem stitch for the stems. When it came to the flowers I confess I'm not a great fan of satin stitch, because I'm not usually very good at it. However I have learned to outline the shape with a back-stitch first, and that works better for me!  I couldn't get the variegated DMC floss Helen used, mine is Anchor 1203.

When it came to using 3" hexagons to cut the finished embroidery into shape, I found mine would not cover the embroidery, no matter how I moved them about.  Probably because mine was too big, so I tried hexagons in three different sizes then gave up in frustration. I used patchwork squares instead.  I'm a bit disappointed, as the hexagons give a much more delicate look to the whole project. I guess I could have done proper 1/4" seams but unfortunately I had cut my squares without a seam allowance, so I made faux patchwork as per the instructions. I used Bondaweb/Wonderunder to fix them in place, then stitched them down with invisible thread.  I had learnt how to use it when I made the Seagull Cushion. 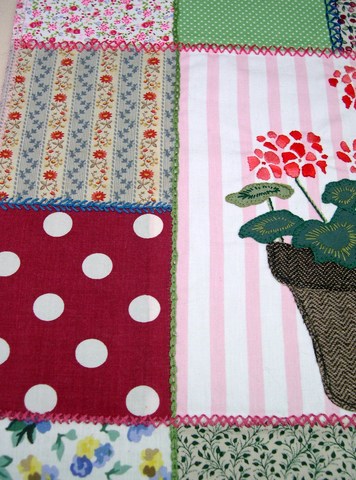 Then I added the hand embroidery over the machine stitching.  I used two strands of Anchor floss in green, pink and blue. I chose my personal favourite stitches including the chain stitch, the cross stitch, and the fern stitch. I didn't add the pearl buttons.  I had to order the pom-pom trim on-line, so while I was waiting for it to arrive I had another go at getting hexagons in the right size! I finally got the hexies the right size and configuration.  You can see there is less room around it than on the pattern picture.  One of the problems I had was that I am not familiar with which measurement is being referred to when you say a three inch hexagon.  The length of the shortest side?  Or the widest part? Or the width between two sides? I found that I needed one where the shortest side is two inch, the widest point is four inch, and the width between two parallel sides is three and 1/2". So now I know, and have a template ready should I make another one as I am not unpicking this one! 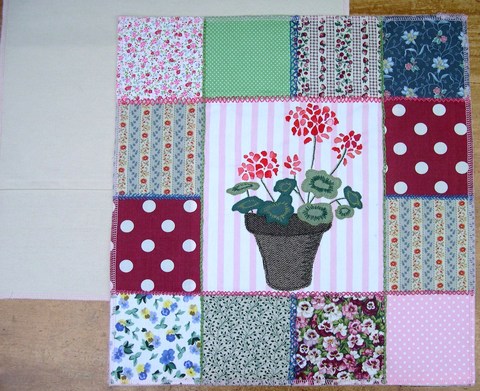 I cut a backing to hide and protect the back of the embroidery out of the cream canvas I am using for the back of the cushion.  It's just a simple envelope closure.  I went on-line to get some tips on using pom-pom trim as it isn't easy to handle.  I opted to pin then baste it on to the front panel before assembling the cushion, and stitched it on in red so I could see the line easily. I aimed to just have the pom-poms hanging out, without any of the tape showing. 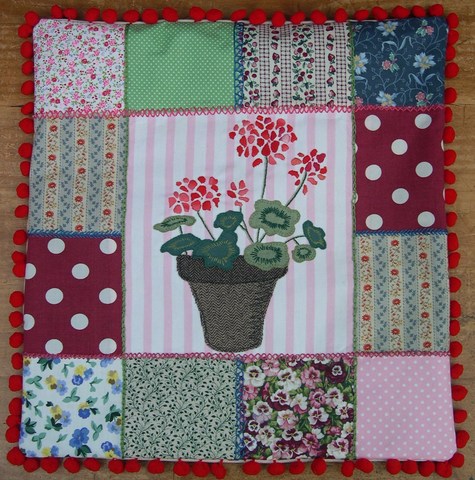 I sandwiched the front and backs right sides together and pinned.  I sewed with my walking foot and my needle as far to the left as it would go.  As you can't see the trim I did manage to catch a pom-pom on one corner, and the tape did show in a couple of places. I unpicked and released the pom-pom and stitched it again, but this time I used my zipper foot.  I went round the whole cushion as it was much easier to keep to a straight line, and all the tape was caught in the seam. Time for a quick press, and fitting the cushion pad. (all patterns from Bustle & Sew!)