As I said back in February, I expected this to be a long term project.  Having learnt from experience that the problem with taking something apart is that when you finally put it back together again, you can’t always remember the little details of where and how things were fitted originally,  I started a little notebook and wrote down all the details and measurements (such as where the ties were sewn, and how the cuffs were held in place).  I also took lots of photos, before, during and after dismantling. The first step was to carefully remove the ruined lining. Underneath the satin-like lining was a loose woven cotton one, sewn as one with the satin.  That would be the interlining (as opposed to interfacing).  It gives a nice ‘feel’ to the lining as well as added warmth and durability.

I took it  to my local fabric shop and they helped me pick out replacements.  I ended up with a much darker brown polyester satin, and a cream flannel.  You can see them below, the top row is the new fabric, with the original fabrics underneath.  Brown flannel would have been my choice, but they didn’t have any, and it won’t be seen anyway – I didn’t even know it was there after all! 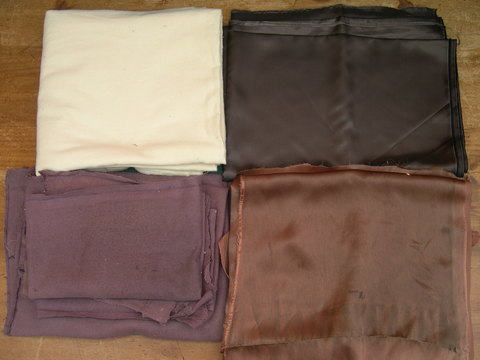 When I came to examine the unlined coat, I got very depressed.  I thought I had bitten off more than I could chew!  There was absolutely no point in fitting a new lining to a damaged coat, and there seemed to be so much in need of repair!  However, I decided I would just have to take things one step at a time, and see how I got on.  I wrote a job list and worked my way down it, ticking them off as I went. 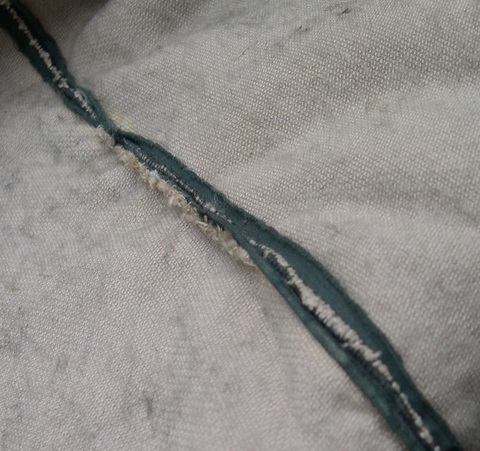 1.  I started by repairing the sleeves.  They have an extra piece, presumably necessary in coats.  I used blanket-stitch on the frayed edges and then re-sewed the edge back into the seam by gently tapering it.  All the seams had been sewn with tape.

2.  The cuffs needed work too.  I opened them up, did the repairs, then folded them back and re-attached them with four thread ties (north, south, east, west!)

3.  Next I did the two half-belts where they had pulled away from the coat, repairing, reinforcing and re-attaching them.

4.  Then moved down the side seams, and made repairs where necessary.

5.  After I consulted my text books I decided to use a herringbone stitch for the hem as it helped keep it flat.

6.  I re-attached the front facings with a slip stitch.

7. The pockets had to go.  I used the old ones as patterns and fitted new ones cut from brown sheeting.  I suppose I could have used the satin lining fabric, but the original ones were only in some loose weave cotton.  I learnt I had to attach each piece to the extensions inside the pocket, and then sew the two pieces together to form the pocket. 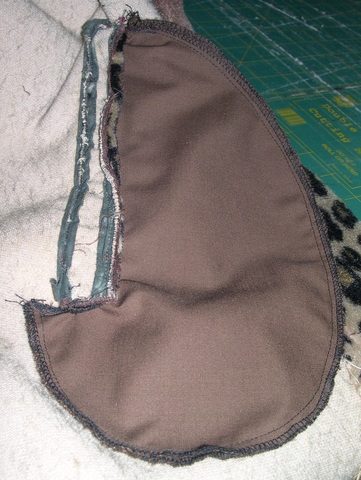 I had never used this technique before, and the thickness of the fabric made it awkward.  I took it nice and slow and my machine and I managed to fit it without breaking a needle or blowing a fuse.  I made long tacking stitches at the top, bottom and middle to pull the pocket towards the front of the coat (as per the photo record I had kept). 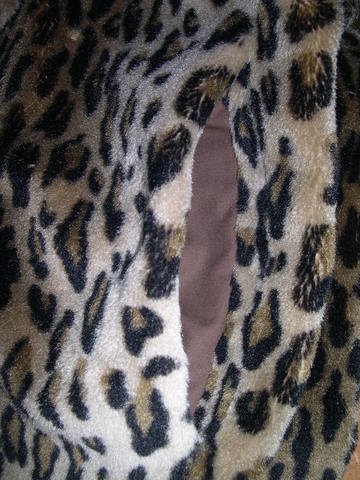 8.  Then I moved on to the collar and repaired that.  Already the coat is hanging better!

9.  The buttons.  There was only one button left instead of two and a spare.  I had nothing like the original flat tortoiseshell used, so I went shopping.  I came home with two button choices, and a back-up plan for self-covered buttons.  They were nice buttons, but in the end I decided to use three from my mother’s collection instead!  Nothing like the original in style or colour, but they fit, are vintage and a little unusual.  I think they go well with the overall style. 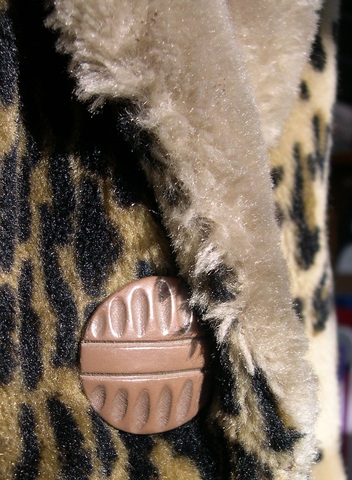 10. The buttonholes were frayed so I re-sewed them using upholstery thread.  The pile makes it difficult to get ‘perfect’ stitches, but it also makes it difficult to see them!  I would prefer some sort of bound buttonhole, but I don’t see how I can do it.  At least they won’t fray now, and the buttons look great, but I will have to try and find a better way or I will have to wear the coat done up all the time to hide the stitching!  I will attach the spare button after the new lining is fitted.

11. I wanted to replace the old fabric hanging loop with a chain rather than use fabric again, as it would be stronger.  However it occurred to me it might be cold on my neck, and my other-half pointed out they can pull on your hair!  Then I discovered they only came in silver or black and I wanted gold, so I decided I will use Hemline Coat Loops in Black Leather instead.  I have ordered a pack on-line and it can be fitted after the lining goes back in.

So, much, much sooner than I expected, the coat is ready, and it’s time to move on to the lining!