I went to the Knitting and Stitching Show at Alexandra Palace again last October.  One of the stalls I visited was "Ragged Life" where I met Elspeth Jackson the owner.  She kindly signed a copy of her book "Rag Rugs, Pillows and More" for me and we chatted about the Rya Rug I had made back in the 70's and the rising popularity of "Rag Rugging". 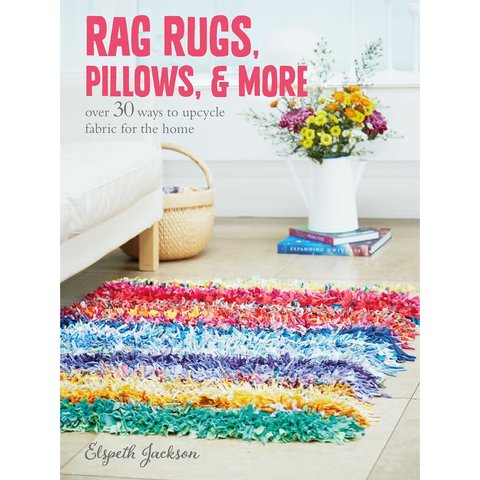 WHAT IS RAG RUGGING?

It is a British tradition from Victorian times where the poor always recycled!  Clothing no longer good enough for wearing was used to make warm rugs for the floor by tearing them into strips and feeding them through a piece of hessian.

There are two different techniques, one uses a continuous strip which creates loops - The Loopy Rag Rug.  The other uses individual strips giving a much fuller effect, the shaggy rag rug.  In her book Elspeth also includes how to make a Braided Rug, as well as projects other than rugs to try.  I am going to make a shaggy rug to remind me of that long ago Rya Rug.

I still had my latch hook from the 70's, and a supply of hessian for the backing, but decided to buy the new Spring Tool as it would be quicker than the latch. 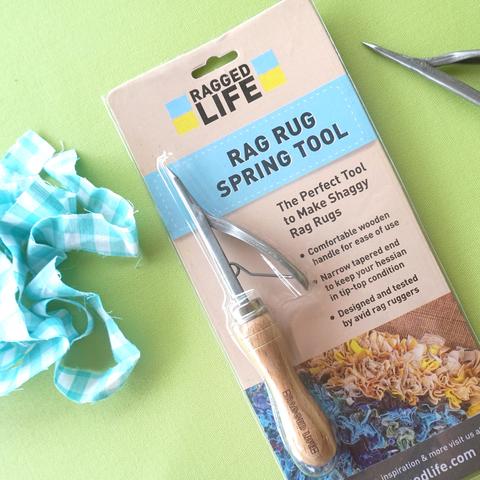 I also bought the rug gauge to speed up cutting strips to the same length, so the last job was actually choosing fabrics! Obviously you need the hessian (burlap) for the backing, which doesn't want to be too loosely woven or too tightly woven.  Medium is 10 hpi (holes per inch).  You then need to hem it all round, which can be done with your machine using a straight or zig-zag stitch.  Or you can buy it ready prepared from raggedlife.com. For the rug itself, after reading Elspeth's suggestions, my list of contributors consisted of curtain fabric, brushed cotton flannel sheeting, jersey t-shirt, an old duvet cover and some quilting weight cottons from my stash.  The colours I chose were red as my primary with black, grey and cream as neutrals.

Here is Elspeth from her YouTube channel talking about choosing and preparing materials:

I had not idea how much I would need to complete my small rug (100 x 60cm, about 39" x 23").  I used my rotary cutter to make strips, then the gauge to get the lengths, and filled three candy buckets with red, black/grey and cream. 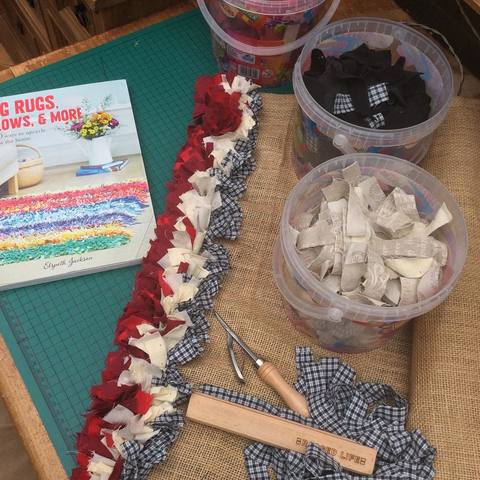 Basically you reach under and over a thread in the hessian, grab the end of your strip and drag it back stopping when it is halfway.  Repeat.  The hardest thing to gauge is how close to position them to each other, which can vary according to the fabrics your use.  Thick fabrics need a bigger space, thinner fabrics a smaller one.  They need to be quite dense at the two ends so they can flop out without revealing hessian, but can be less dense in the main body.

Even with the new spring tool and the gauge, it is not a quick job!  I sat with my buckets every evening, having to go top them up every now and then, and slowly progressed.... 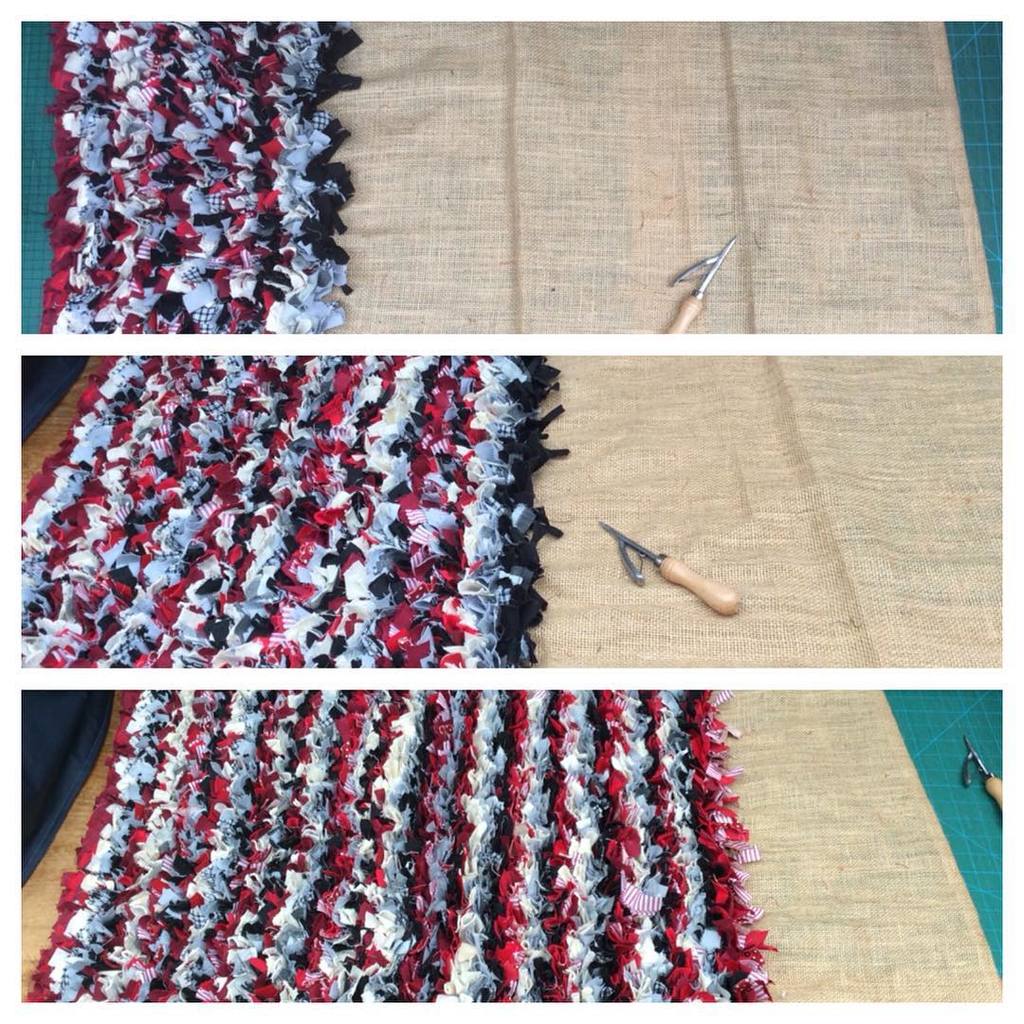 ...and then one day it was finished!  Unfortunately when I proudly lay it on the floor my dogs thought it was some new kind of toy, and started gently pulling the strips out, one by one! So after all that work I had to give it to a friend as he doesn't have any pets.  He put it in his bedroom as the colours were perfect, as a bedside rug.  He says it's lovely and soft to stand on in bare feet in the morning, so I am happy it has gone to a home where it can be appreciated! 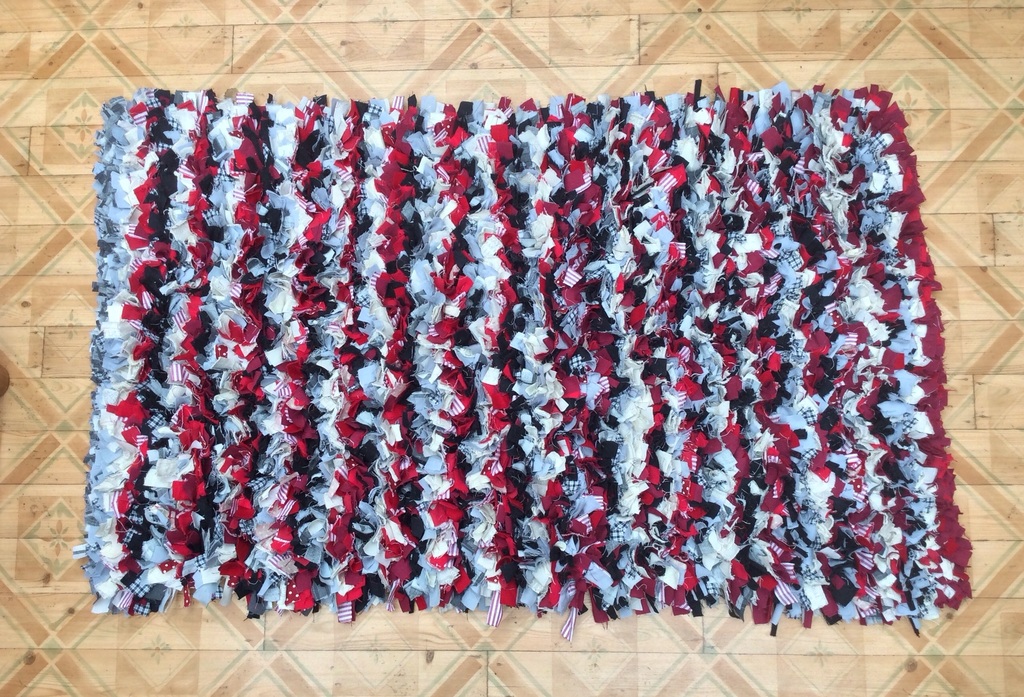