A couple of years ago I bought two patterns from Studio Kat Designs - the Quattro and the Lollapalooza - and shipped them over from the States.

I really liked the pieced versions, like this Quattro above.  I read the instructions.... then hastily put them in my pattern drawer as waaaay too scary!  There they have sat ever since. Now I have decided I am finally ready make the Quattro, for several reasons; The first hurdle was choosing which fabrics to use.  The pattern calls for a main exterior fabric and 2 contrasting ones, plus a lining.  I considered using the fantastic batik and shibori fabrics I bought from the Changs at the Knitting & Stitching Show last October . Nice, striking, but no quite the look I wanted for this bag. 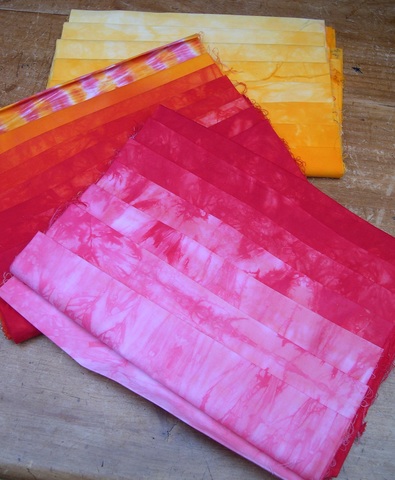 Then I played with the fabric I tie-dyed at a Workshop.  Although definitely bright and summery, it wasn’t quite what I wanted either.  So I sat and looked at my fabrics. 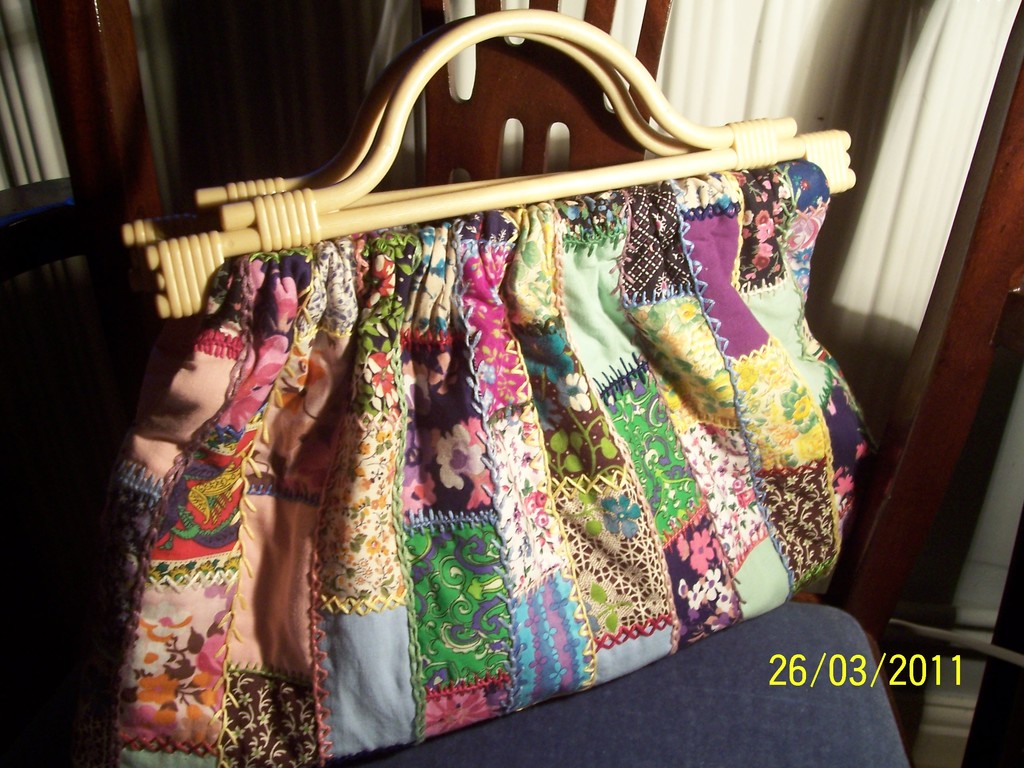 Then I went to my mother’s vintage patchwork stash.  Most of the fabric is small pieces, a whole lot of it hand stitched to little pieces of cardboard (from packing glassware when they ran a shop).  I have used them to make a couple of bags, (like the one above) but they were not a good size for this bag.  I had some bigger pieces, including one with roses I particularly like, but not enough of any one of them.  Which was a shame, as I decided this was definitely the look I wanted - very pretty and quintessentially English Country Garden look! The front, with the pieced pouch

Then I remembered, I had also bought Kat’s e-book “RockStar Peacework”.  In it she showed me how to piece the front of the pouch together.  So I decided that if I pieced the zipped pocket too, and then rather than use one main and two contrast fabrics used them all, I would have enough, and a very unique look!  I did buy some fabric for the lining, a pretty pink print from Moda, from my local patchwork shop . I bought the zips okay but I had to use 1" D rings as I couldn't find any 1 and 1/4" ones.  I would have liked rings.  Never mind. 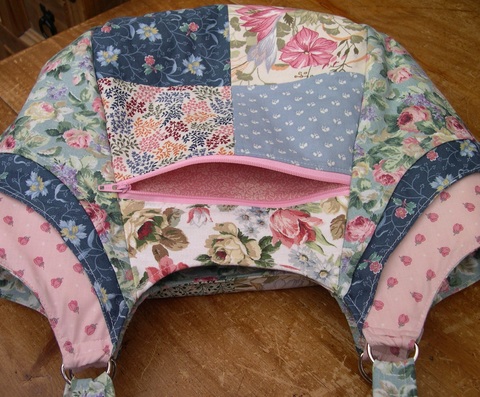 The back, with the extra pieceing for the zipped pocket

There are a lot of pieces to cut out, and I missed some of the 'cut 2' instructions and had to cut out more as I discovered them... 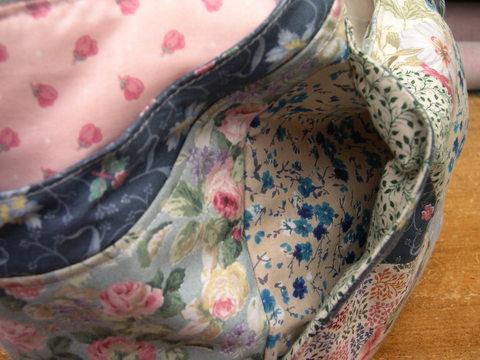 Like I missed the back of the front pouch and the bag panel behind it.  You can see them here.  Kat’s instructions are flawless; my execution of them was not.  The piecing worked perfectly, I was really pleased.  However, using so many different fabrics did make identifying the pattern pieces more complicated as I assembled the bag! 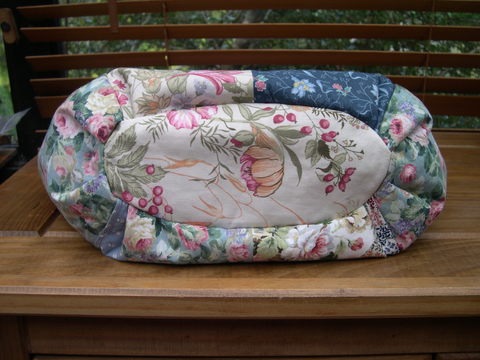 When I got to attaching the base I managed to make some pleats that were not part of the design, and had a raw edge that shouldn’t have been showing. Doing 1/4" seams needed more precision.  I decided to unpick it all and try again.  I edge stitched the base and starched it so the edge was more defined.  I looked at the pictures and tried to see where the pleats were on Kat's version.  They really don't show up at all - was I getting them right? Anxiety set in, but three attempts later I managed to get all the raw edges in, and all the pleats the same at both ends.  I decided it was okay.  Hoorah! 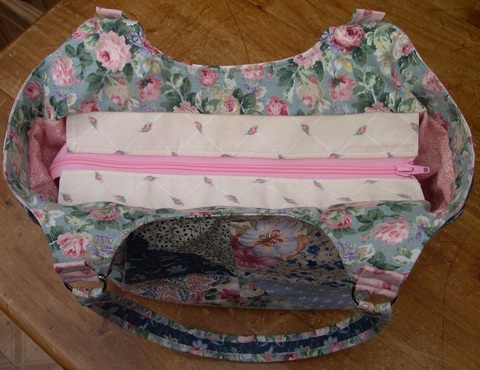 The next problem I had was top-stitching around the top of the bag.  The thickness was too great on the front and back pieces, and my machine kept sticking.   I was already using my walking foot and a new needle, but I remembered that when I typed my Sewing Machine Needle Organizer details that quilting needles were good for multi layers, so I tried one of them.  Still not good enough.  In the end the answer was going back and trimming the seam allowance right down, then it worked just fine.  Fitting the zipper was straightforward.  Easy. Peasy. 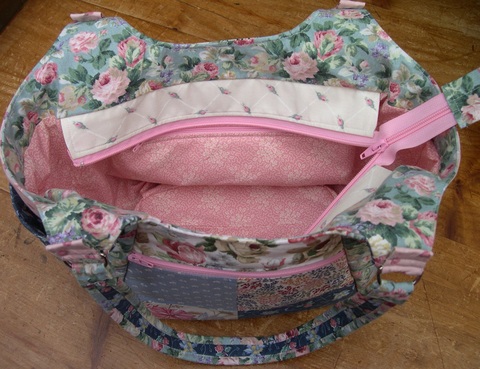 I added the optional zipper tab as I liked that look better than the zipper end.  Now Kat's bag has nothing inside, as she promotes the use of her PortaPockets.  However, as I hadn't bought one of these, I added my usual zipped pocket on one side of the lining (you can just see it peeking out from under the main zipper), and a divided slip pocket on the other side. This has a pen slot, notepad slot and a pocket for my rather tiny mobile phone, with a flap and velcro closure (it has a habit of slipping out). Kat introduced me a a new method of making handles too. 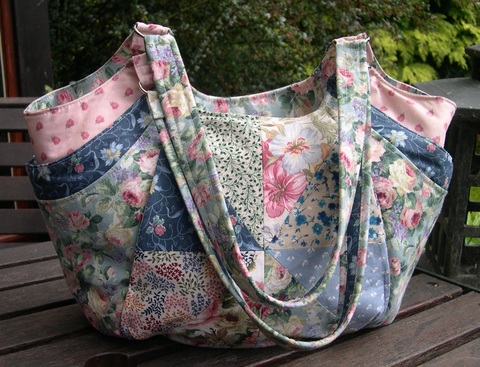 My Quattro, loaded up and ready to go!

So now I have my new bag, which is terribly pretty, summery, and has loads of storage and a zipper closure.  Now I want to sew a new sunspex case and a purse/wallet to match! The Quattro - I'm sure my Mother would have approved!

My bag is entered in Kat's 'Bag of the Month' competition for August!

You can visit her Blog to see all the entrants and cast your vote in August.

For those of you in the U.K. who want to buy the pattern, it is now available from my local patchwork shop, 'Sew Creative Quilts' here

My problem with the base was partly not being able to see them in any of the pictures, so I was anxious I hadn't positioned them correctly!  In the end I decided as they actually disappear under the bag, which is why you can't see them, I had probably got them right.  Will you post a picture of your bag?

You did a great job, Karen!

Your quattro bag turned out beautiful! It's not an easy make, I was also struggling with the bottom - I decided to enlarge the bottom.

Thank you Martha.  I always liked the opportunities The Quattro offered for mixing fabrics or embellishing the front, (rather like the Sherbert by Melly&Me only more complex).  Using some more of my mother's vintage fabric was an inspiration, and I am looking forward to taking it out and showing it off!  I know she would have loved it.

Yours is the prettiest Quatro I've seen. I had decided not to get that pattern because of the ones I had seen made up, but seeing yours, I will get the pattern. You perfected the English Country look; all the patterns and colors are stunning together

My mother seemed to take the attitude that if there were enough colours they would end up having something that pulled them together!  I have never done "proper" patchwork, just old fashioned squares so I was really impressed with the way Kat's design made a perfect piece.  I think you should go for it!

I love that purse,I have the same pattern and am scared of it. I really love the colors you did a great job maybe I will get my nerve up. I am no good at putting colors together and sometimes it just happens. Keep on going you have helped me to give it a try. LOL