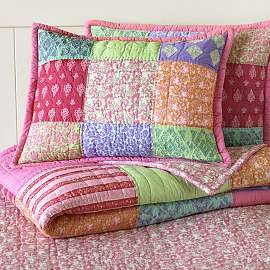 What is this issue wreaking havoc in the patchwork quilting world?

Don't worry, its not hampering the masses from making millions of quilts a year... But it is hampering those that want to make their own unique quilts!

It is simply the inability to design their own unique patchwork quilting blocks! So we are going to start at the beginning and figuratively "pick some blocks apart"! By understanding how a block was originally designed and made YOU can change it to make it your OWN! In ANY size YOU want it to be so that OUR quilt is the size YOU want it to be, not what a pattern says it should be! Now I know, patterns make it easy, I myself published a line of patchwork quilting patterns for over 25 years, but once you can look at any quilt block, decide what are the bare bones of the block... then the gloves come off and YOU are in charge!

With two patchwork quilting books new to the market, Gwen Marston's "Liberated Quiltmaking II" and Jinny Beyer's "The Quilter's Album of Patchwork Patterns:4050 Piece..." I thought it a good time to talk a little about how one analyzes patchwork quilting by in a sense picking them apart. These two books are both GREAT resource tools by any quilter and this article will start you off on getting the most out of them both. 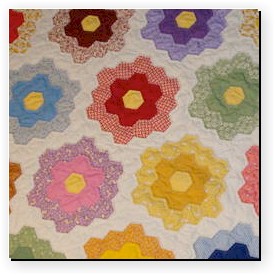 First you must realize that there are major divisions in patchwork quilting blocks that just about any good quilt-making book or class will teach you. The first is patchwork quilting that is called one patch. That is when you use only one template for the entire quilt! That one shape will usually be a square, triangle, or a hexagon. Depending on fabric coloration's and placement you can end up with an overall design. Think of the pattern "Grandmother's Flower Garden" and you have pictured a one patch quilt made up of only one size hexagon!

When you get into patchwork quilting that are quilts made up of many duplicate blocks each block can be analyzed, broken down, into it's main elements so that you can figure out what each section is made up of and how you might either totally duplicate it, or, if you are adventurous, change out the elements that you don't quite like as well to replace them with your own! After all that is how patchwork quilting block patterns came to be! After all there are 4,050 or them named in Jinny's new book! Of course if you don't want to go to the bother her book categorizes them for you!

The first of these block divisions is known as a four patch. Why it isn't called a two patch is beyond me, but like the nine patch they count all the squares rather than the number of rows and columns. So a four patch quilt block can be broken as two blocks across by two blocks down. 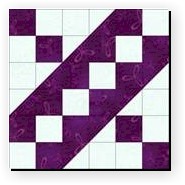 A classic example of a four patch quilt block is "Jacobs Ladder". You can see that the overall block is made up of four equal sized smaller squares, and you can even see that while two of them are made up of simple triangles, that the remaining small squares are four patches of their own! This quilt takes on all sorts of looks depending on fabric choices, and also placement of color.

Next we have the very classic Nine Patch. The patchwork quilting block is 3 divisions across x 3 divisions down. There are literally hundreds of them! One that you are sure to recognize, and is simple to piece, is a "Double Irish Chain".

As you will see you have the nine patchwork quilting grid, and in alternating squares you have smaller, mini 9 patches. When these blocks are set together you have a quilt that takes on an overall pattern. In this case they actually make up a bigger nine patch of their own and a cute baby quilt. By adding more blocks together you can make whatever size quilt you like. And since YOU made the pattern yourself, YOU control the size of each block, and hence the size of the overall quilt! Notice in this example how the white appears as "holes". The Amish might substitute the white for black which will make the green really POP! It's fun to experiment!

Moving on to the Five Patch patchwork quilting block you see that these have five blocks across x five blocks down. What you can do with these blocks is almost limitless, but just one example is "Sister's Choice".

Visit my website to see how a b/w study of the block, changing where you put the values of colors really makes a huge difference in how the block "reads"! 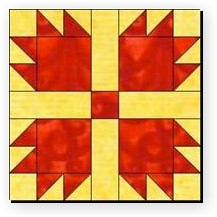 Lastly, lets look at Seven Patch patchwork quilting Blocks: each block is made up of seven equal divisions both across and down. The very traditional Bears Claw is a fine example.
By mere selection of fabrics the quilt can be very traditional, or it can take on a more modern look!

This is only a glimpse at just a FEW of many, MANY patchwork quilting patterns available to you in these block grids. Perhaps we will take a look in depth at them in the very near future! Be sure to check out my Patchwork Quilting website for more to come!

Comment by Chris on April 9, 2010 at 9:30am
An excellent article well written. I too have done something similar in one of my online class titled "Block Beginnings". This is valuable information for new quilters. It demystifies the complexity of quilt making and makes it tangible for all.

I have another book for you to review, it is titled 5500 Quilt Block Designs, by Maggie Malone. I have nothing to do with this book, I just thought you might be interested to know there are more than 4050 that are published in Jinnys book.

Quilt blocks and the possibilities for design are endless.........that is what attracted me to quilting in the first place.