Quilting is form of therapy for Spring Grove woman 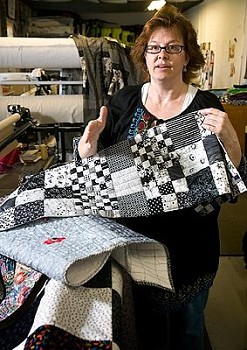 Quilting isn't just about keeping fingers busy. For one Spring Grove woman, quilting helps her sort out her mind. Designer Kay M. Capps Cross has turned her basement into a quilting studio, with spools upon spools of thread and yards upon yards of fabric. She sells her own patterns from her business, called
Cross Cuts. The 46-year-old has struggled with clinical depression and an eating disorder. Quilting became a form of therapy for her about 10 years ago. Cross' therapist learned that Cross enjoys quilting, and he suggested she bring her quilts in and talk about them. "Quilting became an assignment," Cross said... [
read on!]