Sisters Mary Niceswanger and Alice Lauer spent nearly a century together, growing up as two of 11 children, parting for their own life experiences and then living together again as widows for 13 of the last 14 years of Lauer's life. 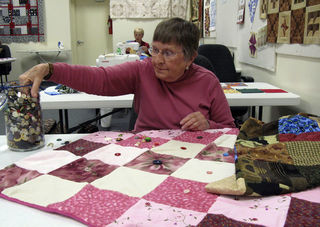 As Alzheimer's disease slowly changed Alice, who passed away in February just shy of her 99th birthday, older sister Mary, 103, continued to care for her. "They were very close," said Kathy Casto, who attended church with the sisters. "At first the changes were gradual, and then it snowballed. It was hard for Mary." On Thursday, Niceswanger and a group of volunteers spent the day honoring her sister and taking part in a project that may give comfort to local Alzheimer's patients just like her sister. The back room of Quilter's Corner in Marietta was filled with sewing machines, fabric and good intentions as the Angel Quilters gathered to make what's known as "touch quilts" for Alzheimer's patients at Harmar Place Rehabilitation and Extended Care. "They've found people with Alzheimer's are comforted by fabric and things they can feel," said organizer Darlene Martin...
read on!