As I have finished 5 of my 6 PhD targets I thought I could afford the time to make something else! I wanted to make myself a long waistcoat with pockets (none of my clothes ever seem to have enough pockets).  I bought this pattern, basic but with plenty of variations.  I am making view A.

I decided to patch it together from my pile of denim scraps, as we all know denim goes with everything!  It would also use up a lot of denim!  For added interest I would put the seams on the outside.  This way I would have interesting fraying going on on the outside and the unlined inside would be smooth. 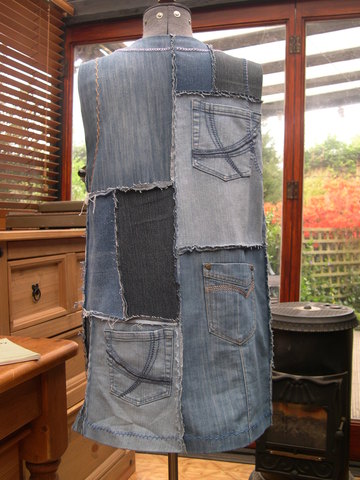 I spent a lot of time patching bits together for each pattern piece.  Most of my scraps appeared to have pockets on, so I have pockets up my back too!.  Despite the time spent making it random, I still managed to get matching pockets on the front which was intensely annoying. When I tried it on for the fit I had to adjust the sides as they were too big, and the armholes, which were too small!.  It would have been a better shape with a bust dart, but a) it wasn't supposed to have one and b) the pocket on the bust was in the way, so I left it alone. I liked the open vent in the sides, but this side hangs perfectly... 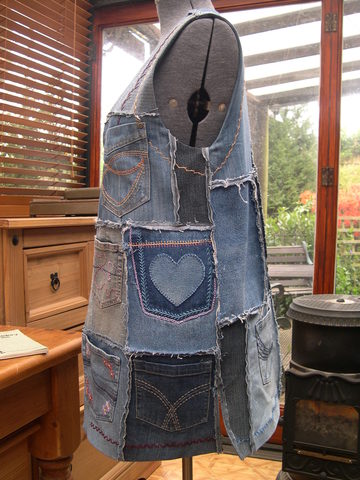 and this side won't.  I unpicked it and did it again but it still curls up.  I had to take one of the pockets off to take in the side seam.  Happily it was the only one without stud fittings!  I adjusted the facings to match the alterations I had made to the armholes, and fitted them.

I used hand embroidery to hold the facings and hem in place.  Then I decided to embellish the patch where the pocket had been.  Then I added more to the other pockets.  Then I used some more scraps to add some applique hearts, with more hand embroidery. I wore it today, and it feels good.  The front hem is level despite how it looks in the photo!  The other half said "It's finished then?" and I said "Possibly."

I may add more embroidery.

I may add a lining.

I may change one of those matching pockets.

I will enjoy wearing it!

I too would wear it, I love Jean anything

Very creative.  I love it and would love wearing it.  I'm sure it will bring many inquiring comments such as, "So cool, where did you get it?"  or  "Where can I get one like it?"

Comment by Carol Johnson on April 28, 2014 at 8:57am
Love to upcycle-and the jeans speak to my past! What a fun project!

Very creative!  I would be proud to wear that :)

Great idea to do the  vest this way. Love it.