BACK TO SCHOOL BAG - "needs to try harder"

I recently decided to see what I could make out of the less desirable front pockets on jeans.  I had a light and a dark pair that had already donated their legs and back pockets to other projects, so I decided to start by pieceing them together! The waistbands met reasonably well, but the bag would not have enough depth for what I had in mind, so I decided to add a strip both sides.   Then I joined it into a tube, and made my life difficult fitting a bottom to that.  What I should have done was added a strip across the bottom then added the back panel beneath that and my life would have been simple. That's how I made my denim crazy patchwork tote. But I didn't, I bulled ahead and fitted a bottom from another strip in my jeans scrap bag.

So now the outer was assembled, I dug out a piece of fabric from my mother's stash, a nice printed cotton.  I added a zipped pocket on one side and a divided pocket on the other side, and tried it out.  It was all too flimsy.  After rummaging around I found a few pieces of Soft and Stable, and added it to the lining in 4 seperate pieces. 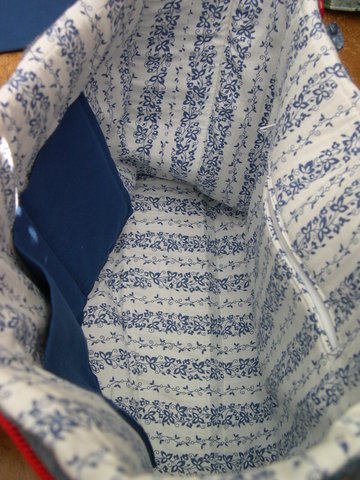 What I should have done - bought a new pack of Soft and Stable and added it to the outer shell in one piece - but I didn't, and it sort of worked but it made the lining too loose, so I seamed all 4 corners which pinched the fabric tight and joined the Soft & Stable together.  Bingo, the lining held it all up nicely! 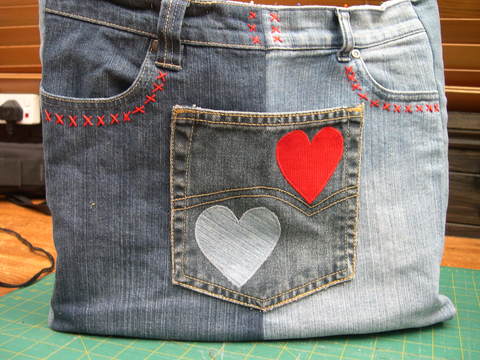 Now the front looked rather plain and boring, so I added a patch pocket (saved from another pair of jeans).  Still too plain, so I added some applique hearts.  Better.  I lined the pocket and attached it. Still not quite right, and the waistband seams would not lay flat.  So I added some hand embroidery which held the seams flat, and some more following the curves of the pockets.  Like that. 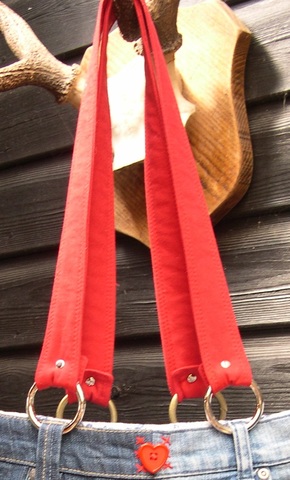 Next I considered what to do about handles.  I decided to make red fabric straps with gate-hinge rings and attach them using the belt loops.  Hmm, still need something else, so I added red heart-shaped buttons.  It was at this stage I showed the bag to my niece, who was over for a visit.  She said her eldest daughter had planned to ask if I could make her a bag for starting Senior School in September.  So we all looked at this bag, and decided with a few finishing touches it would fit the bill. So there are the right ways, and other ways, but in the end it's the results that count.  I delivered the finished bag and everyone seems happy with the result, despite my less than "by the book" methods! 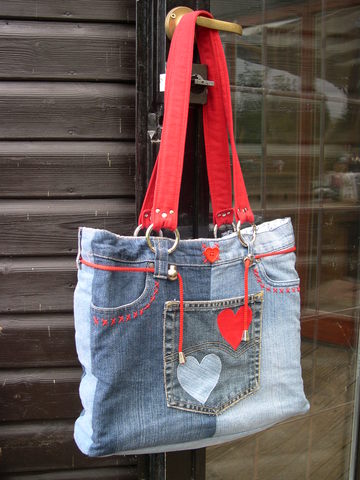 I will put more pictures in my Album "Denim Recycling"