I've been busy looking at fabric and bag patterns recently, and have some new ones to try!  A friend of mine has wanted me to make her a bag with animal print and denim for some time and I found Velboa fabric in Minerva Crafts.  It's a low pile faux fur fabric, not a print, but durable, hard-wearing, non-stretch and machine washable. I really liked it, so I ordered some in Leopard and Tiger.  Now I want to use them for myself (with black needlecord) as well as with denim for Emma so I started looking at bag patterns.  I wanted to find;

I came across these from Swoon Patterns.  I like the bags, and that the designer Alicia says "Swoon Patterns create bags that are simple, clean and easily modified by the advanced sewist".  It takes away the guilt of making changes to create the bag you have in your head!

"Glenda" a convertible clutch - yes, I know, this is a clutch, but it converts quickly into a shoulder bag with the removable strap. The decider was when I saw that the interior includes a zippered divider compartment.  Got to try that - looks like I've found my new "grab & go" bag - and it would look good in Velboa too!

"Rosie" a crossbody bag- with a feature panel on the flap.  I can see the panel and strap in black corduroy with tiger and/or leopard for the flap and body!  (It may also do to re-create my Butterfly Bag).

"Dottie" a vintage-style bag.  I love the shape, can you imagine this in faux fur with black piping and handles?  Definitely a 1950's vintage Hollywood starlet look!  I'm spoilt for choice now, I have all three to try, starting with Glenda.

The Glenda handbag pattern calls for a fusible interfacing, suggesting Pellon SF101, and a sew-in stabilizer such as Pellon Peltex 70.  I can't get Pellon here, and nearest Vilene products would be Vilene G700 for the fusible (which is 90cm/36" wide so you need less of it) and Vilene S80/240 a heavy sew-in (used for pelmets) for the stabilizer.

Brianne of Ali Cat & Co said Peltex can be hard to manage and gives some useful tips for with sewing it.  Marilyn of Shades of Bold and Liz of Moments for the 2014 Purse Palooza didn't want to use it, as they felt it was too cardboard-like. 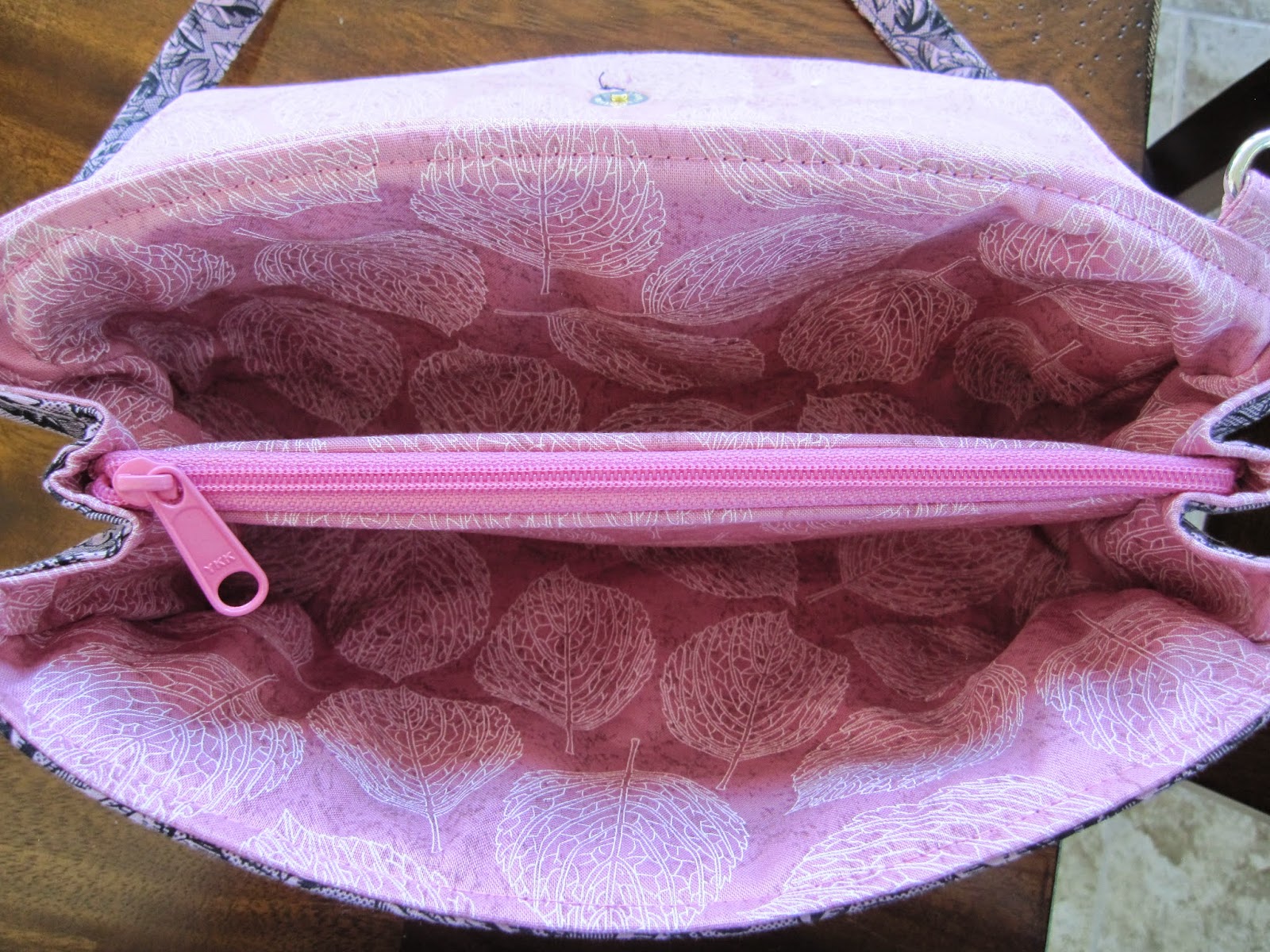 Marilyn used ByAnnies 'Soft & Stable' instead and says "It also makes the divider pocket padded so it is perfect for a phone".  Sounds ideal, and I can buy it from my local patchwork shop Sew Creative.  However, it would be too bulky with Velboa.

Glenda can be made with a magnetic catch or a twist lock.  As I recently bought some extra thin magnetic clasps from Bag Clasps Ltd I want to try one of them. 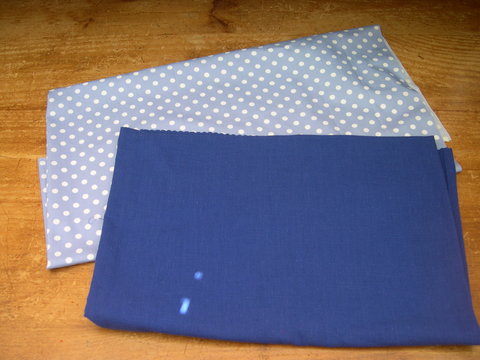 So here are the sewing materials what I am using: 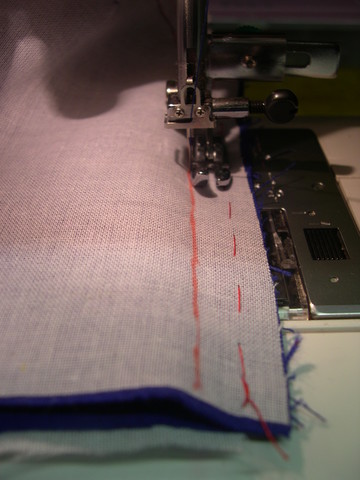 The pattern has separate pieces to cut out the stabilizer without seam allowance, as it is held in place by the fusible interfacing, so there is no bulk in the seams.  With Soft and Stable being so thick, I used my zipper foot to stitch alongside it as directed.  You can see here that I've got into the habit of drawing my stitching line on with a Frixion pen to make my stitching more accurate. 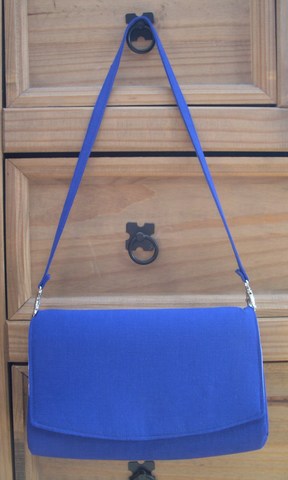 A nice smooth finish, I had a few problems with the Soft and Stable, and made a lot of notes on the pattern for next time.  I think it would have been easier (for me) to have used the S&S full sized and stitched into the seams, then carefully trimmed out of them afterwards rather than cut it without seam allowance. This probably works well with a thinner stabilizer and I will find out next time! 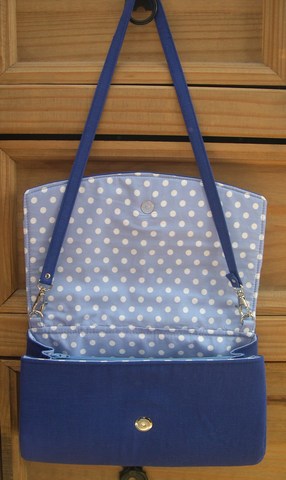 I also had problems getting the top-stitching right across the back, as what looked good on the exterior was in the wrong place on the lining and I ended up hand-basting a line to follow. This again was my own fault, which could have been avoided by:

b) not cutting the S&S without seam allowance.

Never mind, it came out fine in the end.  I do find I am lifting up the flap to check where the magnetic catch is when I close it, even though it does catch on the magnet.  I think I will use a twist lock on the next bag. 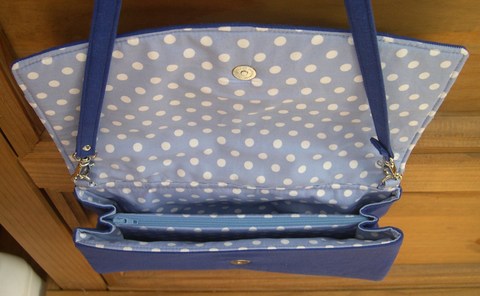 I was having some problems with the tension when I made the strap, and in the end decided to use rivets to seal in the swivel clips.  They look very smart.  I used my walking (even-feed) foot and a quilting needle to stitch the divider in place and had no trouble at all.  I would point out that my zipper was far too long and I trimmed it to fit, so I had no metal ends on the zipper to worry about.  Next time I think I will use the technique I learnt from Erin (www.dogundermydesk) making the Essential Wristlets to tidy up the ends of the zipper better, as one end was a little wonky! 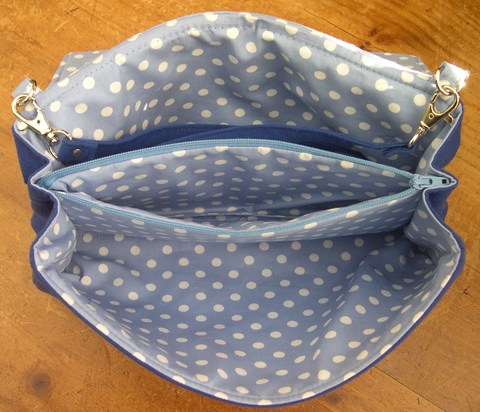 The trouble with edge stitching the opening closed in the lining is that it always turns upwards. I usually slip stitch by hand to avoid this, but decided to save time on a detail that won't be seen.  The strap tucks away inside neatly. 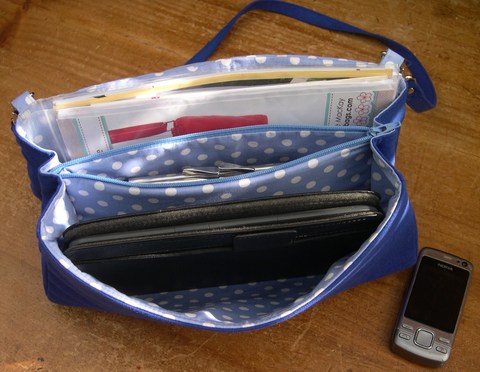 To give you some idea of size, they are bag patterns in the back, my Kindle in a leather case in the front and my purse in the zipped section, .  I will have to add a slip pocket on the back to hold my rather rather tiny mobile phone, which felt a little lost in all that space! I thought it could do with some dressing up, so I pinned on this Kanzashi brooch then rushed outside to get a picture while the sun was shining!

A final word on the Glenda pattern - despite being a relatively simple bag I would not guarantee good results for a beginner sewer as some experience is assumed, for instance how to fit a magnetic catch.  However, I would point out that you can always ASK!  This is an advantage of indie designers, and the internet, help is always available.

It IS well done.  Everything is straight and crisp.  AS ALWAYS!