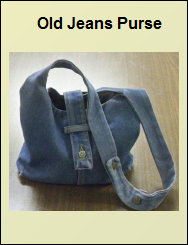 I found this ‘Old Jeans Purse’ pattern by Patty Dunn of www.alldunndesigns.com  in the July edition of the www.studiokatdesigns.com newsletter.

I liked the look of this purse, and I have to say I have enjoyed making it.  As Patty points out, jeans differ, and mine were ladies not men’s, with smaller pockets and much shorter legs!  The pattern simply would not fit in the same way  My solution was to reverse the pattern layout which gave me a shorter handle on one side, but the option of adding an extension piece if necessary to replace the lost length.  In the event I shortened the other handle to match. To complete the design I needed a section of waistband, a belt loop and the two rear pockets.  I started cutting off the waistband at the button end, and managed to accidentally slice into it, so I was far more careful after that and managed not to damage the buttonhole end!  I did manage to get a belt loop off without damage to me, the loop or the fabric! 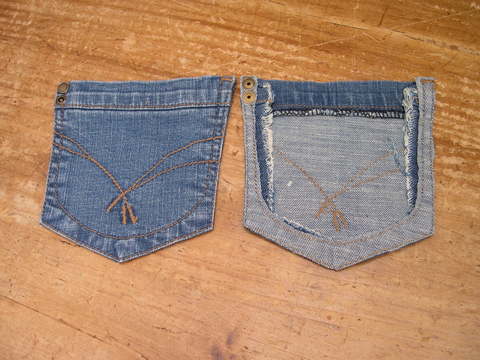 As these pockets were riveted on one corner, I could not just cut the stitches to release them.  I had to cut the pockets out complete, then trim the jeans fabric away.  This had the benefit of preserving the stitching - I suppose I could have lined them for a nicer finish but it didn't occur to me at the time!

I then decided I wanted something firmer than fusible interfacing, so I got out my 'Stiff Stuff' by Lazy Girl.  I had read about it in another StudioKat Designs newsletter and had managed to buy some here in the U.K.  It’s thinner than ByAnnie’s ‘Soft & Stable’ but it would still bulk up all the seams.  I used a spray on temporary adhesive to keep it in place initially, then forgot I was supposed to sew it on until I actually assembled the bag.

I had no trouble following the instructions which were clear and showed me a few new ways of doing things, which is always fun and useful!  I also found a triple stitch on my Janome that make my stitches show up almost as well as the original jeans stitching.  I stitched the pockets on by going over the existing stitches, and went round the rivets using a universal zipper foot which let me get quite close.

The main problem became the handles.  I could not turn them, even having trimmed the seams as close as I deemed safe.  So in the end I undid the stitching at the sewn end and fed a piece of cotton tape through from the open end, stitched this to the seam allowance and wrestled them through by pulling on it.  When I had managed this (in 90 degrees F) I tucked the raw ends back in and machined them closed again.  The rest of the assembly went according to the pattern, with a few additions of my own… 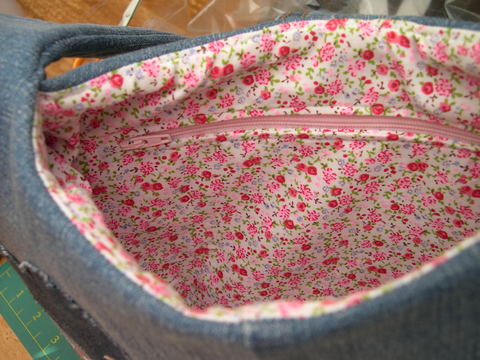 I added a zipped pocket inside -  isn’t this fabric pretty!

I also made the patch pocket wider and divided it in two, then added some applique hearts to the front, with rough freestyle machine stitches so the edges will fray nicely.  I would have liked to have topstitched the edge, but the handles made that impossible.

I had never used the hammer-on jeans buttons before, so that was a bit scary and I bent two nails trying but got them all on in the end!  (The other half says he can straighten them out for me to use on the remaining buttons).  They are silver with a glass ‘diamond’ in the centre.

My finished bag looks quite different from Patty’s being firm and smooth rather than soft and slouchy.  I may make another now without ‘stiff stuff’ as I actually prefer the softer look.

I really enjoyed making it, thanks Patty!  Here is my finished bag - 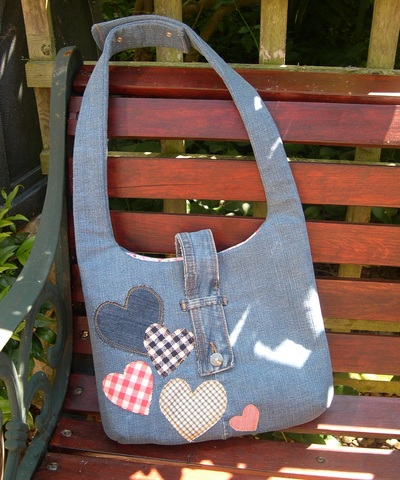 It is pretty, but I seem to have lost the whole 'slouchy' appeal, it's all a little too stiff.  I may have a re-think this....

Although my bag turned out quite well, and very pretty, I felt I had spoilt Patty's original design by using the stiff stuff as it made the handles far too rigid and it completely lost the whole ‘slouchy’ bag look.   So I decided to take it apart and try a few changes to see if I could restore some ‘slouchiness’!

The main problem had been the handles, so I cut them off.  I then cut the lining to match the new shape.  I used 2 pieces of the old handles (stiff stuff removed) to make tabs to hold O rings.  When I put it all together I top-stitched round the whole edge. 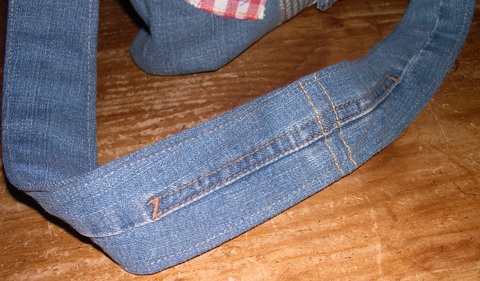 I made a new handle by joining 2 strips from the hip end of the outer leg seam which had some nice stitch detail, and top-stitched the seam.  I just used some lightweight interfacing this time, an old bit of Vilene Fold-a-band.  I wanted to use the jeans stitching as a feature and centre it on the top of the handle, so I had to fold it differently to usual or the stitching ended up on one edge!  I trimmed and fiddled and got it how I wanted it.   I am really pleased with the results, it just looks like it's a continuous seam!

I tucked the ends in differently too, tucking one inside the other, and they came out neat and flat. Then turned them back on themselves and stitched them down to hold the O rings.  I added yet more applique hearts on the ends of the handles. I’m not sure if perhaps brass rivets might have looked better?  Here is the new handle attached with the rings and tabs.  I should have top-stitched the tabs to match the straps really, maybe next time!

While I had the bag apart I also decided to replace the silver no-sew jean buttons with some vintage brass buttons with shanks to match the brass O rings.   I used two so I could have a ‘tight’ fitting for an empty bag, or a ‘loose’ one for a full load!

I don’t know if I like the way the tight button hangs down when not in use.  My hand stitching there is not exactly beautiful, I don’t like attaching buttons with shanks for that reason, but these are very cute, they have rabbits on them!

I had used a wider divided pocket so  took the opportunity to add a flap on one, with a velcro closure, to hold my little mobile phone safely.  My purse (wallet) fits in the zipped pocket opposite, and my keys clip on the O ring. With the handles out on the edge there is easier access and plenty of room for one of my favourite things - a big thick book for a little light reading – though my kindle would fit easily too.  I can access the pockets with the strap done up as they are on either side of it, but the zipped purse needs the strap undone, which is a good thing security-wise. 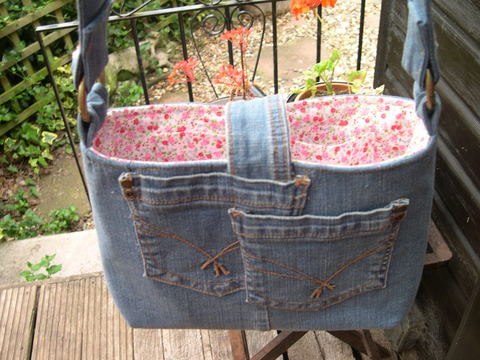 This shows the bag from the back.  I really like the way Patty used the pockets, they make such a great feature.  I just love that lining fabric, it’s sooo pretty, and look, no hearts here, the pockets are decorative enough. 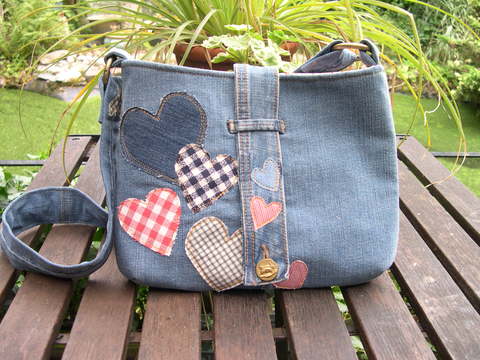 My new improved version of the 'Stiff Stuff' Old Jeans Purse!  Note the new loose and relaxed-look handle, instead of the stiff straight one.  I added yet more applique hearts on the closing strap!  I think it looks great now, far more ‘slouchy’ and in keeping with Patty's original design.  I will put more pictures in my album as I can't get more on here!

Great job I must say! I feel inspired to get out my collection of old jeans and put them to good use too!! :)

I have put this post on Chris's Week 12 of 'Bag Brag Tuesday'!

I love how your bag turned out , from  a pair of jeans to a beautiful creation!

Thank you for sharing your bag , and for the link!

What a cute bag and the lining is knock out gorgeous.

Great way to repurpose a favorite pair of jeans and so practical too.

Comment by Veronica Goff on July 26, 2013 at 9:52am
Cute bag! I rather like the stiff, firm look. Do you think that after a while it might loosen up a bit? Very nice use of denim!

This is one of the cutest "re-do" denim purses that I've seen. Good  job !