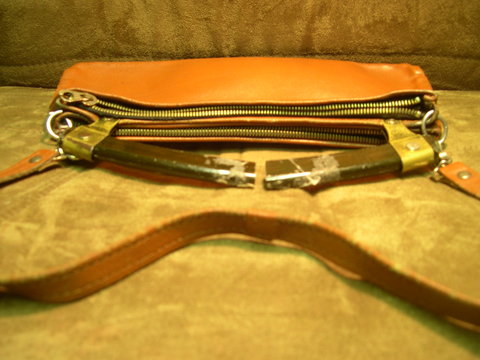 As I said in my last post, my mother-in-law has asked me to sew her a bag to replace her old one as she had broken the handle.  It was a small clutch with two connected zippered sections, a small rigid handle and a longer shoulder strap which she never used.

The only bag pattern I had seen with two zippered sections was the Butterfly Sling Purse, which Janelle designed for a Bag of the Month Club, so I thought I would try that. I particularly liked the heart shaped twist lock, and I decided that if I was going to order the hardware kit, I may as well have the printed pattern instead of downloading it then having to wait for the hardware.  Yes, I could have sourced the bits here, but there was no hurry and it meant a one-stop-shop! In the meantime I bought this blue linen-look cotton (to go with her new winter coat) and teamed it with a blue and white polka dot for the lining.

The packet from Canada arrived a week later, and I finally started work over the weekend. All the pieces are cut by measurements rather than pattern pieces.  I was doing alright until I got to the interfacing.  I had decided to use Vilene S220 in place of Pellon 911FF (fusible featherweight) but I only had a couple of odd shaped pieces.  So I cut pattern pieces out for the interfacing to enable me to fiddle them around until I could get them all out of my bits. 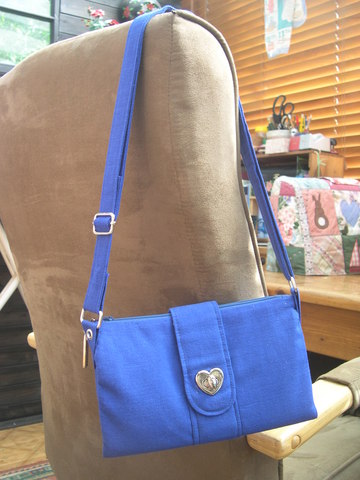 Here it is - isn't that twist lock great! Now I knew there would be a few tweaks needed to make this bag suit my MIL as;

However, it was the nearest I could find and I was sure I could adapt it to suit her needs!  I have made this one, and either it will suit, or I will keep it and make her a more "customised" version! 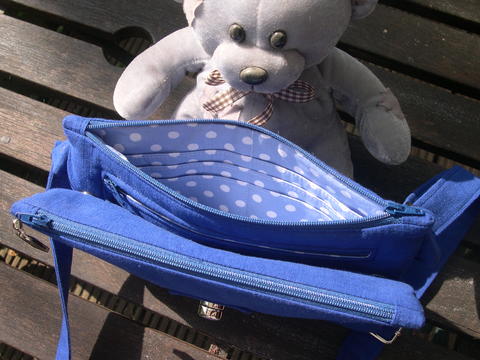 This shows the six card slots inside the first section, and the small zipped pocket between the sections.  I must confess, I loved making this bag!  I stayed up late then got up the next morning and carried right on.  I had no problems, there were no instructions I couldn't understand, no details missing, it was just pure fun! 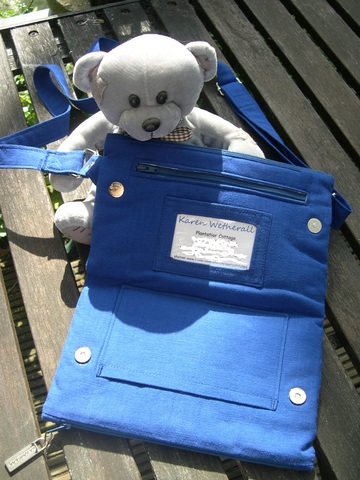 Here it is opened up.  The only problem with flashing your i.d. this way is that anything stored in that slip pocket will fall out!  I'm wondering if I could add a flap to it, held shut with Velcro? 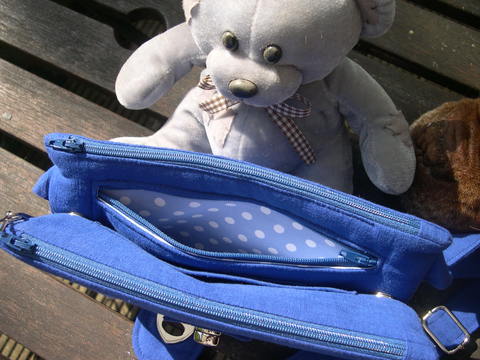 I don't think my mother-in-law will bother to unpopper it at all, as she can just use it done up like this and still be able to use that little zipped pocket.  The problems I did get were with my needles, sewing machine and that fabric.   My stitching around this first zipper was awful!  I stripped the bobbin out and cleaned it all, then re-threaded and fitted a new Microtex needle.  That got the stitching corrected so I unpicked the zipper and did it again. 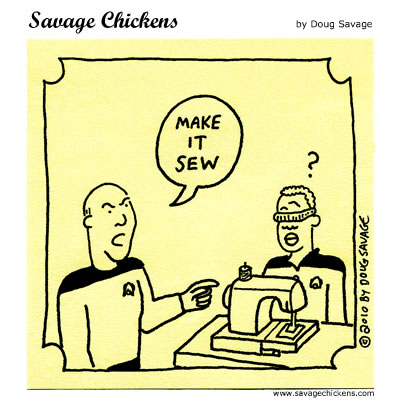 Later on my machine started really thumping, trying to punch through the fabric.  I fitted another new Microtex Sharp needle but it still struggled so I fitted a denim needle. That seemed to work. It was really odd, the stitches were fine but the machine really had trouble getting the needle through.  Go figure. 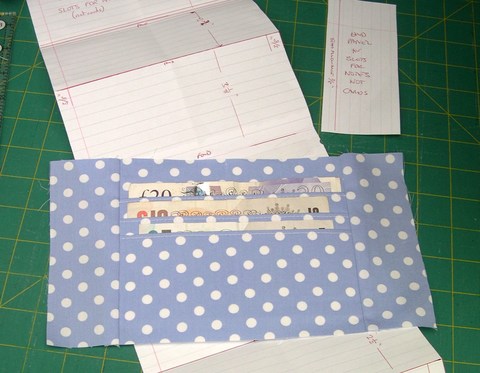 Anyway, the changes I've made.  The first one was having sewn the pocket with slots for 6 cards, I decided she wouldn't need another six.  By following Janelle's example I made my own template for three deeper, undivided slots. 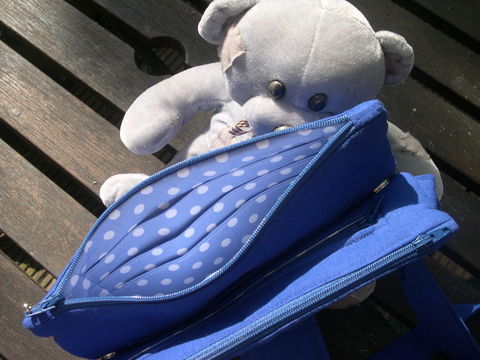 I made them so they can fit £20, £10 and £5 notes or bills and receipts.  Maybe she won't need her big purse after all?  There is room in here for our £1 and £2 coins, and she could use the small zipped pocket between the sections for small change. The other thing I did was to fix the two rectangle rings to stop them moving around.  I could have stitched them, but I thought I could be clever and fit a rivet instead.  I punched a ho1e, only to find the rivet was too long as the straps were too thin!  Happily I managed to fit an eyelet (grommet) instead.  That was lucky, I would have had to add an applique otherwise! 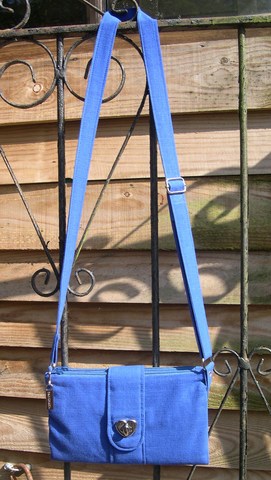 I need to do something about the strap.  It definitely needs to be shorter, but it is a bit limp for a 'handle'.  I could try making another one that is both shorter and stiffer.  I've got some of that Vilene Decovil to try (a fusible, non-woven, leather-like interfacing!) maybe that would work?  I'm going to see her today, so we can see if this bag will hit the spot, or if it's back to the drawing board!

The Butterfly Sling was Janelle's design (Emmaline Bags) for February's Bag of the Month Club this year.  They plan to run the club again next year so keep an eye out for 6 more new designs!

Comment by Cindy Byrd on September 3, 2014 at 9:33pm
Ooh, this purse is perfect! I will definitely be making one (for me). And how cute is the heart clasp? I am in love.

I really like that purse too, and generally I don't like purses at all. You did a beautiful job.