Blankets make a statement - By Meg Jones Volunteers show up for three hours on Tuesday and Thursday evenings in Plymouth to sew thin camouflage sleeping quilts for service members in Iraq and Afghanistan. The sewing began when Todd Richter asked his mother-in-law, Linda Wieck, to make him a thin blanket that he could use during warm-weather service. As quilts go, they're fairly simple. No Celtic knot, double wedding ring or mariner's compass patterns, no months-long effort to make intricate appliqués. Which is precisely the point. These quilts are going to the desert. They're not designed to keep anyone warm on a winter night; they're designed for rolling up into a small bundle to stuff into a Marine's sea bag or a soldier's duffel. So far, more than 1,600 of the camouflage quilts have been made by Wisconsin volunteers through the Camo Quilt Project and given to service members serving in southwest Asia. The size of an Army cot, the quilts can be folded in thirds, rolled and secured with four attached straps. Though the military issues sleeping bags, many troops quickly find out they're too hot to sleep in during the warm months in Iraq or Afghanistan when temperatures can quickly reach triple digits. The quilts have been used as pads, pillows and blankets, and for cushioning bumpy rides on military transports. Some have been draped across metal baking in the hot sun so arms weren't burned. 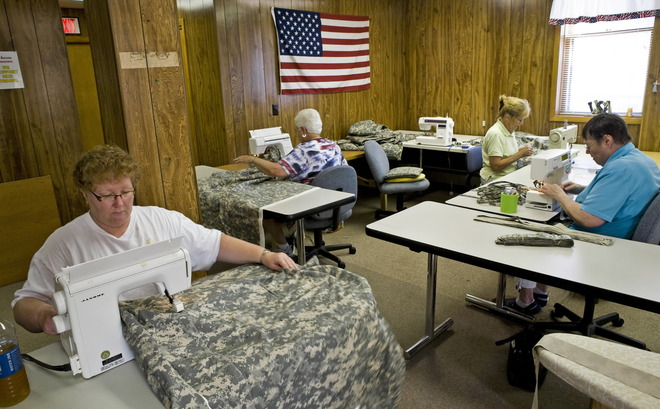 It started in 2006, when Sgt. 1st Class Todd Richter asked his mother-in-law to make him a thin quilt he could use to make his cot a little more comfy when his Wisconsin Army National Guard unit mobilized to Camp Shelby, Miss., for training and overseas deployment. "I only intended to make one," Linda Wieck said. "Until Todd got down to Camp Shelby and 40 guys wanted them." [ read on!]