What fun! These Easter Eggs will look terrific in my ceramic colander and perfect for our little cottage setting. Thank you for a thorough write up; I'm sure you will tempt new sewers with this delightful bit of sewing. So I thought this Easter project was extremely cool.

Kim from "retro-mama", mom to two rambunctious boys and late-night designer and seamstress,…

Vintage and upcycling at its best

I have spent a very enjoyable afternoon rummaging through my 'must do something with these sometime soon' stash of fabrics and items. I came across a skirt I rescued that my daughter was throwing away (too tight - me thinks too many take away suppers) and some red wool fabric that was left over from another project and thought umm these will go nicely together so ran up a lovely tote 'as we crafters often do' without a pattern just of the top of my head. I will be taking it on its first outing… Continue

I forgot to mention:

I found a good tutorial on making your own dressform. It's on YouTube. It's by threadbangers.com. No messy duct tape (been there, done that), but instead is made of moisten and stick packing tape. I am actually gonna try one! Excited!

Well, I found time to sew a little yesterday, though the baby was crawling all over me! I was able to make a lining and interface it. It is for a bag that I am making. I bought lots of pretty FQ's, and match or not, I used strips of some of them. The pattern is a Kwik Sew. It's not hard at all, and I have the lining pinned in. Now, just finding time to actually sew it in? Also got out 3 burpies that I am gonna embroider a baby's name on for a cousin (baby due next month). Just… Continue

Would anyone know of kind of interfacing that I would need for doing a T-shirt quilt ?

How to find the secret code to qualify for the weekly give-away!

If you have already downloaded and installed the SWN toolbar this applies to YOU!

Embroidery/Sewing Machine Cozy - "A Cozy for a Queen" Tutorial 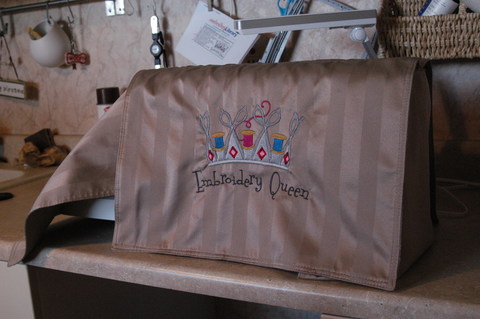 Get Your Tutorial Featured on SWN!

We are always looking for unique and creative tutorials to share with users on Sew What's New! If you have a tutorial or how-to demonstration that you think would interest our users, please contact us! We'd love to see it. Our very own
TawnyB had…

SEWING and watching the olympics on TV...right now it is the hockey game between Canada and the USA!!!
Go CANADA GO!!

The last piece of the fabric

....of this fabric I brought back from Japan finally changed its shape. For 2 years I didn't touch this fabric because I loved it too much to cut into pieces. It was already just a strip.

When I came back from Japan, my good friend visited me ans ask what I found over there. So I showed her the fabrics I and she loved this one. The one I loved but couldn't afford to buy more than 1 meter. This material was from a designer's collection and the price was…

My first thought was and still is, can't babies get their arms caught in the Tabs. Cute but with out them! Mallory Murray of "Modern Mind, Vintage Heart" shares the perfect project for a baby shower. This is an ideal project when you need something very quickly, and babies love these. The project takes fewer than 30 minutes. This taggie-style little blanket, is perfectly sized for baby’s pincher…
Continue

Lovely, Great! I am a frugal saver and this is the ultimate! I have a basket full of selvages. Until now I have used them to pull electrical cords from the back of cupboards to hanging flower baskets under the trees(weight down one end and throw over high limbs) Your quilt is a much prettier way use tem. Jean in Ohio

Hi, I'm trying to find a copy of a book of doll clothes by Joan Hinds called "Sew the International Wardrobe for 18-inch Dolls". If anyone has one they want to sell, contact me at thebearwoman2004@yahoo.com

I have just added a couple of pictures so far. And I had totally forgotten about them. Today, a few days later, I found that my round zip wallet have been on the front page! Thank you for featuring :D

I guess I should add more pictures....!

The two brands of monofilament thread Londa, of Londas-Sewing.com recommends are :…
Continue