Maggie Makes developed this great tutorial which is just in time for Easter!

I picked up a magazine today that showed how to make decorative eggs using plastic, or paper mache' eggs and origami paper. You could buy a set of 5 for $15, so cheap-o me thought, I can do this. So, ran in Hobby Lobby and got 6 paper mache' eggs. I picked out a small package of foil origami paper, and a package of some with an Oriental flair. So, I'm gonna dig out the homemade mod podge and my trusty paint brush and have a whack at it tomorrow. I also got 2 wooden… Continue

I am trying to find directions on how to do a traditional bustle on a wedding dress. Just one pull up the middle to

shorten the train. The back of the dress and train has a lot of detail and we want it to show. I have lookd for videos on how to do this and all they show is someone pulling the tain up but no instructions on how to sew it and make it stay!!! Could anyone help?!

Debi Tullier sent this tutorial in and I thought it was interesting. This tutorial explains how to fuse plastic with other decorative materials safely with an iron and teflon pressing sheets. The author, creates bags and dog clothing with the fused material. I'm sure that you could make many more things such as… Continue

"A Pin for Every Purpose" 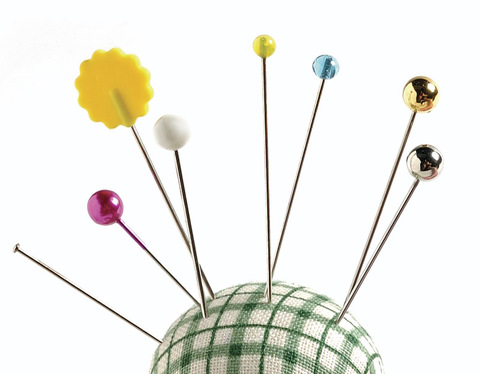 Although they are among the tiniest of sewing tools, pins have very important jobs.


Pins may be the tiniest of sewing tools, but they take on big, important jobs. They hold pattern pieces in place, anchor seam allowances as you sew, fit fabric on the body, and secure all sorts of squirmy trims, delicate sequins, and miniscule beads. If, like many of us, you take for granted the pins that pepper your pincushion, I urge you to take a good hard look—from head to… Continue

A baby Gift for Max

One of my dear friends, Amanda is also my hairdresser..... Thank goodness! She really is a miracle worker!

Amanda commissioned me to make a gift for one of her other friends, also named Rebecca. She had just delivered a baby boy she named Max. Amanda…

I finally finished the blouse I've been talking about. I put pics of it, and of the one that I used as my pattern on SWN. I bought the green one at the mall and I absolutely love it. It is so comfortable, and I put it in a lingerie bag, wash it, and hang it to dry. Easy, easy, easy! I wanted to see if I could make a pattern, so carefully I laid the blouse, piece by piece onto pages from a newspaper, and I copied the shapes. I transferred them to my pretty fabric, and cut them…

Hi fellow creators! Just wanted to leave a note saying that I finished the blouse last night, and before I hemmed it, I decided to slip it on and check the fit. Now, I am a lover of loose, comfortable, but cute clothes. This blouse, however, did not fit into any of those categories! Whenever I add a section of fabric that is to be gathered, in the past, I didn't measure how much width I needed. I just cut out a large rectangle, and if it was sssuuupppeeerrr gathered, that was… Continue

Considering that sewing is supposedly a relaxing pastime, isn’t it odd that the very first step in the process – threading the…
Continue

Hi everyone. I am still working on Noah's diaper duffel, but I am having to take it slowly, because I am finding that the instructions are really confusing. I have just thrown caution into the wind and used my own interpretation of the instructions, and so far, Lord it's cute as a button! Also, remember the blouse from the mall that I made a newspaper pattern from? Well, it's actually almost finished. It's turning out really pretty. Yes, I have the seam ripper handy and have used… Continue

Good evening everyone! Hope everyone is getting something done on their favorite projects. I have seen several requests for free patterns for pillow case dresses. Well, I was just checking my mail, and I had a note from sewbaby.com about a new pattern line they have. I looked on their website for curiosity's sake, and under the heading "e-patterns" and then "free downloads", there is a pattern-----FREE-----for a pillowcase dress, and you can even use this pattern on just regular… Continue I finished this great wallhanging today! Well, it still needs to be quilted, but I'll do that soon. This design was offered by Moda Fabrics and I used their line of Tranquility fabrics. It has so much movement and color. You can find that pattern here: http://www.modabakeshop.com/2010/02/off-grid-sliced-nine-patch-quilt.html. It…

Donna M. asked me for a link to the dress form tute that I mentioned in one of my posts. It is made with packing tape, which you dampen with water, then wrap around the person modeling for the form. After all the tape, use a hairdryer, then cut off. Go to youtube.com and in their search box, put "how to make a body form, threadbanger projects". I just saw another one, which looks even easier than the threadbanger one. It's called "masking tape dress form". Looks so much easier… Continue

The home pc crashed and I had several requests for the patterns or links to the patterns for the baby sunhat, and the pin cushion. I did dig through my files and massive stack of patterns. I found the pin cushion in a sewing book, and found the pattern page that I had printed from the website. I am having to use my laptop, which I hooked up to the net and set up. So I hope it's all working right! Anyway, my printer/scanner/copier is not hooked to my laptop, so right now, I can't scan the… Continue 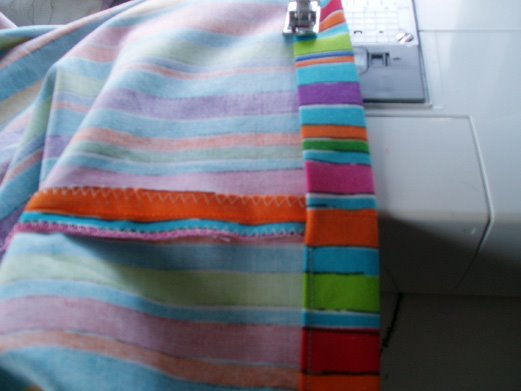 Panty Tutorial: How to Sew Underwear 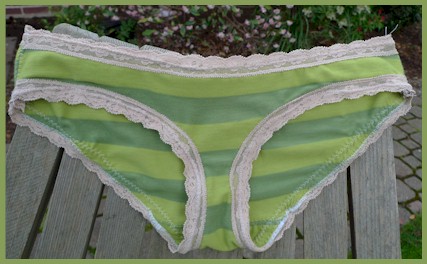 This tutorial by Sarah Seitz will take you, step by step, through the process of creating underwear that fit you perfectly and look great too.… Continue

Would anyone know about crocheting and how to the double crocheting ? I would like to learn to make blankets.