I'm a great fan of Chris W Designs, I have learnt a lot from making her bags. Her instructions are so thorough! When I saw her Easy Street 'Abby's Alley' I loved the rope handles and shaped pockets and thought it would make a great beach bag.  I really like some of the versions I saw, like this one by Namrata, but I didn't actually need one myself. 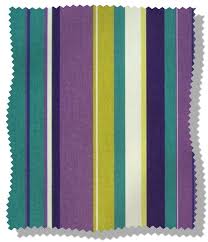 Then by happy accident (serendipity!) I have been asked by a friend to make a beach bag from a remnant she has.   I bought the pattern, downloaded it and checked the pattern only to find the piece she has left is too small for the pattern piece!  I did a search and found out it's called 'Henley' in Mulberry from Prestigious Fabrics, but sadly it's no longer available so I can't buy more. Not to be beaten I read the instructions all the way through, and realised I may be able to do some 'creative piecing' to make two pieces just big enough to form the exterior pockets, and use a co-ordinating contrast fabric for all the rest.

So I went looking for a co-ordinating furnishing fabric; I found some great elephants (Clarke & Clarke Elephants in pastel) and I absolutely loved the flamingos (Fryett's Flamingos multi) but settled on the dotty fabric in mauve.  I may have to go back for some of that Flamingo fabric though! 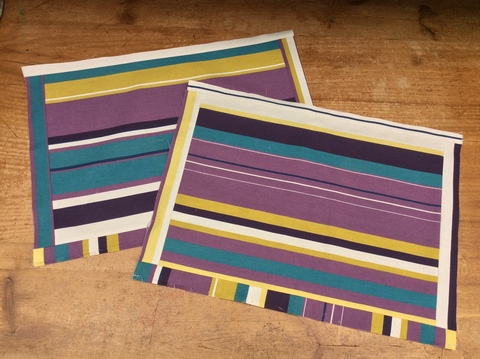 Here are the two panels I have made up by joining strips and adding them along all the edges until it was wide enough, then adding more across the top and bottom until it was high enough!  Now it is just big enough to form the front pocket.  It looks very crisp and modern.  I am going to use them this way up so the short stripes will end up across the base, and the curved top of the pocket will be cut out of the long stripes across the top. 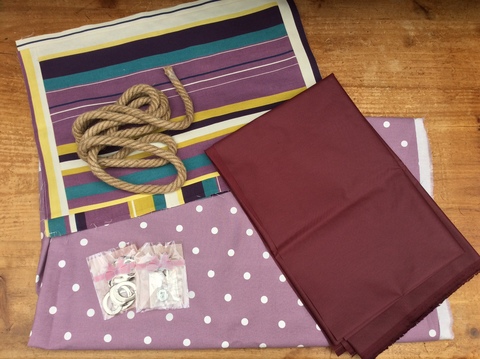 As it's a beach bag I had decided it would be a good idea to use waterproof fabric for the lining, and found four-ounce PU coated nylon in burgundy wine on e-bay here.  However I don't want to edge the top of the bag with it, the colours don't look right.  I will have to add something else between them which means more piecing.  I picked up the rope for the handles at a shop nearby where the owner gamely struggled to saw through it for me. I think I will get the other half to cut it for me. The hardware I bought on-line from Bobbin Girl. I finally managed to assemble the outer bag (having unpicked my top-stitching several times as I wasn't happy with it).  I added the optional rivets as I think they look smart as well as being practical in strengthening the point.  The short stripes will be under the bag, but I still took care matching them all up.  Now I need to work on the lining fabric. 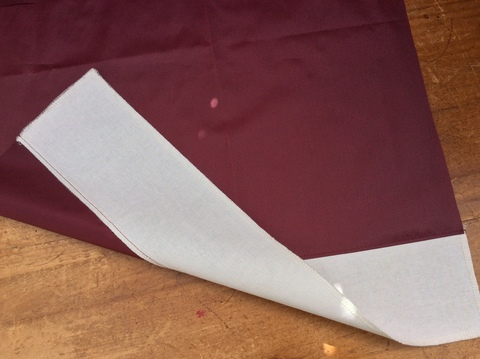 I added a three-inch strip of cream canvas to the top of the lining panel, and top-stitched it. However I then realised I hadn't allowed for the curve of the pocket coming down lower than three-inches so I needed the contrast strip bigger or the curve wouldn't be seen against the dark nylon.  I couldn't face adding another strip of cream canvas, so I rummaged about and found a piece of turquoise curtain lining and added a 1 1/2" strip of that across the top.  Again I top-stitched it, then trimmed the bottom of the panel back to the right size. 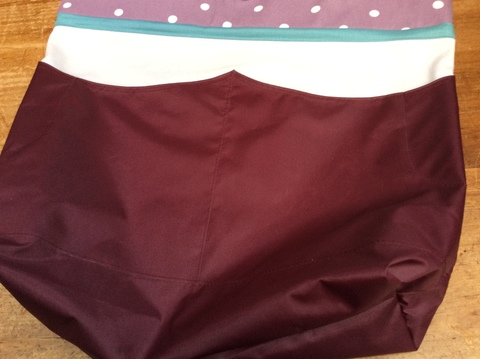 Now the wine nylon pocket curve stands out well against the cream canvas, just how I wanted it. The turquoise strip was just big enough to do the trim along the edge, and it co-ordinates well with the stripes, so all-in-all it's turned out to be an improvement on my original idea! (More serendipity!) 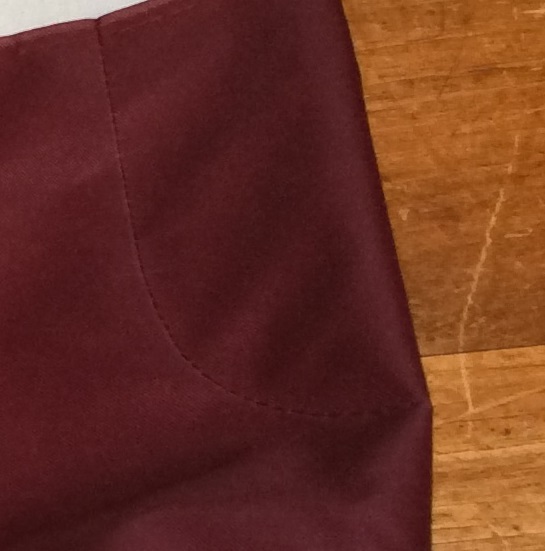 It's not easy to see, but I created four small pockets against the side seams by curving down from the line of stitching Chris suggested (to stop the large pockets 'bagging' out) and extending it to the top. I thought they might be useful for pens, nail files, combs, small treasures etc.  If I made myself one I might make them wide enough for my phone. 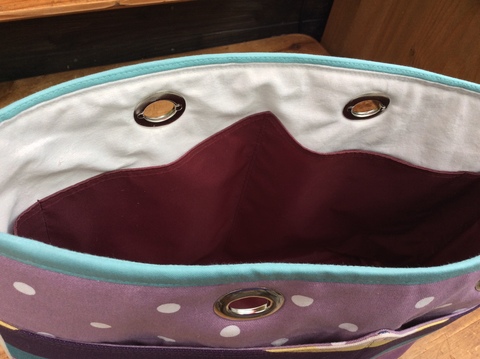 This was my first time inserting eyelets this big, though I have fitted the little ones with Prym Vario Pliers.  Having really good scissors helped (Ginghers), and they all went in with no problems. I am pleased that the nylon will not only protect the bag from damp towels and spilt sun cream but look good too.  I chose to use oval grommets rather than square ones and got them from Bobbin Girl here. As I'd planned, the short stripes are on the base (didn't I do well matching them up). I bought the bag feet (domed ones from Bobbin Girl) but then chose to skip fitting them. 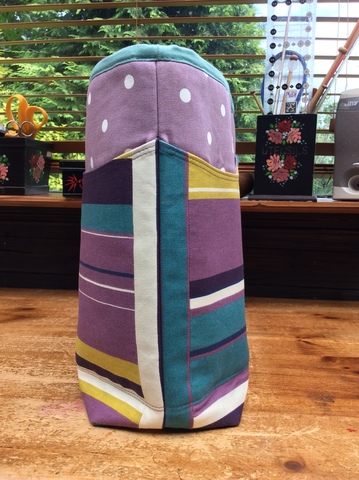 The piecing actually works quite well.  On one side seam the pockets matched up perfectly first time, but on the other side I had to unpick a couple of times before I could get them to match up. Worth it though.  That turquoise trim is perfect!  All-in-all I am very pleased with it, even though it took me a lot longer than it would if I had just used all quilt weight cottons.

Back to the rope handle.  Rosemary says she has trouble with keeping shoulder straps on and would prefer short hand grips.  I'm reluctant to cut it shorter, just in case she needs it longer.  So I've done double knots, one either side of the grommet/eyelet, and put the handle on the outside. (If you look at Namrata's and Chris's Pattern pictures the knots are on the outside and the handles are on the inside). 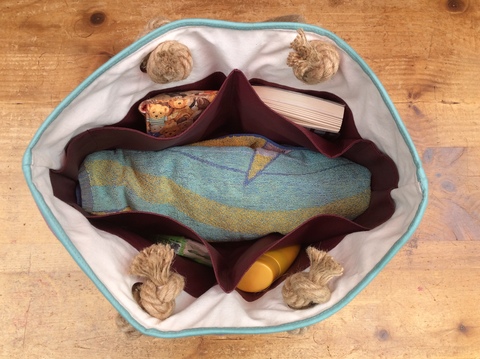 As an added precaution I have bound the raw ends about 1/2" in from the end, using waxed floss (having googled it here) so the ends can fray a little, but not too much.  It's hidden in the knots.  It's quite spacious, as you can see in this shot of the inside ready loaded for the beach and yes, that is a full size beach towel hiding in the bottom! The finished bag, front and back 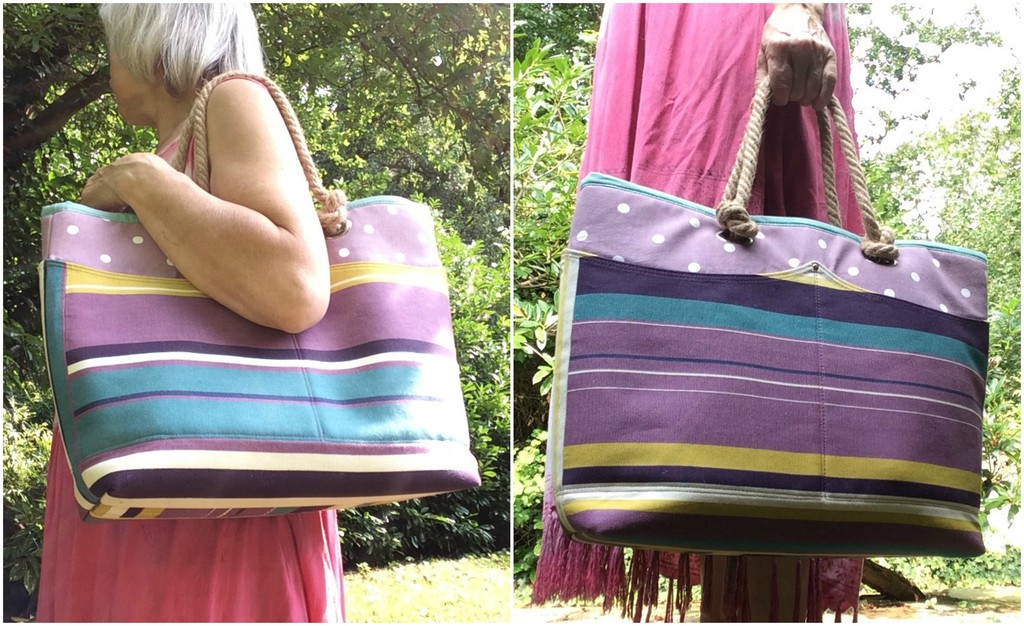 I can still fit this bag on my shoulder, or carry it without it dragging on the ground.  It's a great bag, great fun to make, hope Rosemary enjoys it!

You Can Buy the PDF Sewing Pattern Here