A few years ago a friend of mine asked me to do some alterations for her.  She teaches ballet to students at our local university, and they bought her a hooded sweatshirt and a black tshirt with ballet decals. She appreciated the thought, but not the style!  She wanted to know if I could alter them so the hoodie opened down the front, and do something with the t-shirt.  You can read the post I did here.

I started with the hoodie, cutting the front open and inserting a seperating zipper.  The join to the hood was a bit lumpy on one side, as it had originally overlapped so was bigger than the other side and I had to squash it to make it fit.  I cut some daisies off some trim I had and used them to disguise the joins!

Here it is finished, converted from a hooded sweatshirt to a zipped jacket with a hood.

Next was the t-shirt which was XL, very square and unflattering.  As it had the ballet logo on the front I couldn't cut it open like I had the hoodie.  So I decided to turn it around so that the logo was on the back!

Then I changed it into a waistcoat, and added pockets made from the sleeves and an old blue t-shirt for the lining.  I stitched them on leaving the edges showing like blue binding.

Here it is from the back, a casual fit with handy pockets and the logo.  She liked the new look and was pleased she could make use of it now, and her students approved! 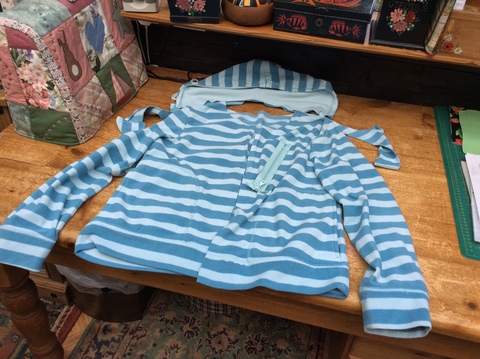 So I decided to try a conversion for myself.  I wanted a fleece cardigan and there don't appear to be any in the shops, so when I came across ths striped hoodie in a charity shop I decided to experiment.  I cut off the hood and the facing and unpicked the short neck zipper, then opened it up down the front. 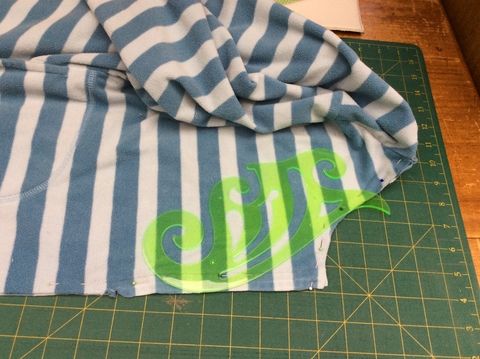 I pinned the two fronts together and cut a curve down to the centre opening from the neck opening using my French Curve tool. To stop it stretching out of shape, I added some clear elastic to the edge using the tricot stitch (or 3 step zig zag) on my sewing machine (Sew U Home Stretch by Wendy Mullin Page 181). Then I carefully cut one half of the hood up into strips and joined them together to form my neckline binding.  The stripes should look like candy stripes now. 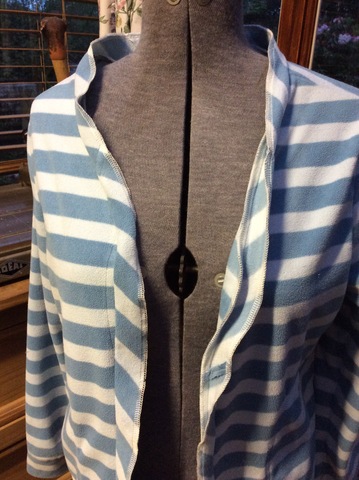 I pinned, stitched and then overlocked the binding to the right side of the neckline all the way round, then pressed it. 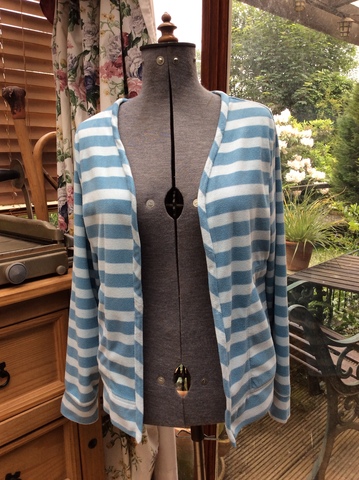 I turned it to the inside and hand stitched it down as a Mock Bind (Sew U Home Stretch Page 85). It does the job and was a very cheap way to grab a fleece cardigan.  I think another time I would cut the neckline straighter. 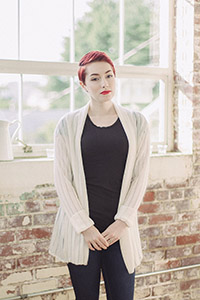 In the meantime I have bought a cardigan pattern to try! The Oslo, from Seamwork.  (If it works out well for me I may go back and buy the Wembley too!)

I am going to try in this jersey print from Minerva Crafts, because it looks like a real knit and I like the colours.