I follow fellow SWN member Chris’s blog and was amused and horrified to read her “8 Bag Making Mistakes to Avoid”,  mainly because I am guilty of all of them, and mistake number two in particular, as demonstrated by my recent Old Jeans Purse story  - "The second bag I made"

So when it came to making my next pattern up, I resolved to follow the designer’s instructions to the letter – at least the first time I made it!  The bag I had decided to try next was the Zip and Go bag by Erin Erikson from the ‘Dog under my Desk’ blog. The only exceptions were that - 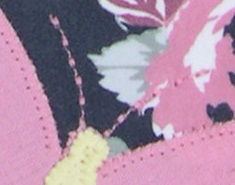 Otherwise I sewed strictly ‘by the book’.  I bought the zips and hardware and the Microtex needles Erin recommended, downloaded and assembled the pattern, and was ready to go!

I had no problems understanding her directions, and as per her suggestion did in fact read the whole thing through before starting.  My only confusion was caused by my pale blue lining right-side not looking that different to the interfaced wrong-side.  As a result I got it the wrong way round, but it was just out with the seam ripper and on with the sewing! 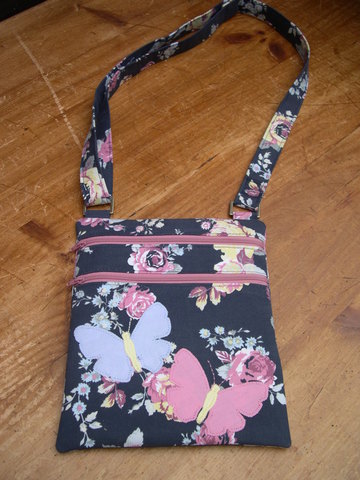 Here is the finished bag, and I’m really pleased with it.  The only notes I made for next time were;-

I enjoyed making this bag, and for my next one - oh yes, there will definitely be a next one - I am going to use denim - watch this space! In all the excitement I forgot to use the Microtex needles, but my Jeans needle seemed to cope.  I have tried to organise my Machine Needles better now, so I will know I have them next time! It’s not pretty, and the pockets are a bit deep, but it works well enough.  The clear pockets were left from my son’s short-lived football card collecting phase.  I stick the red label in with whichever type I have in my machine.

Anyone out there got anything better or prettier I could try?

I have linked this to Chris's Bag Brag Tuesday week 15!