I remembered I had saved tutorial on making continuous bias binding where you only had to sew 3 big seams to make yards of binding.  I looked it up and gave it a go – but apparently I missed an instruction somewhere because I ended up with lots of loops instead of one long length! 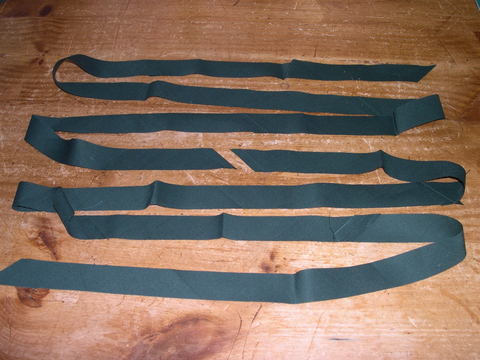 So I re-read it and found the bit I had missed, but as I had all these loops made now I just unpicked one seam in each loop and joined them all together.  This was made easier by the seams all being ready pressed and cut to ready to match up! 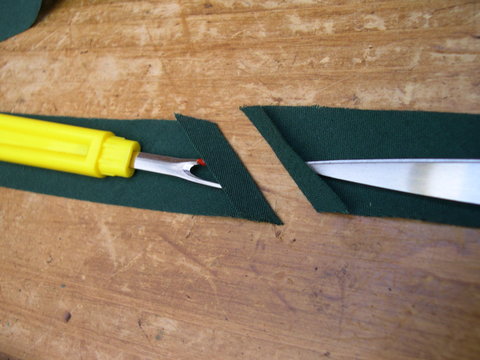 Then I dug out my bias binding maker.  This was from Hemline, and I found the tape came out rather loose and I had to use my fingers to flatten it down for the iron which made it awkward to pull through at the same time.  I was sure I had seen something better, so I went on-line and found the Clover version.  Their end is flat so the tape is ready to press as it comes out.  So I bought one of them.  Here you can see them together and see what I mean! 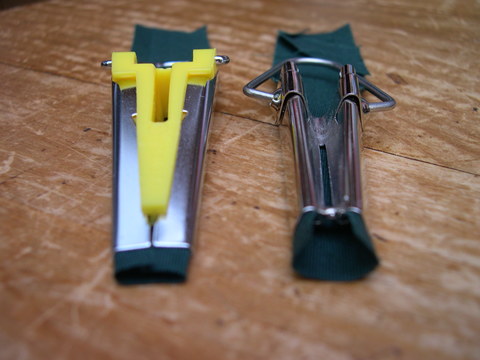 Then I got out the Binder foot for my Janome.  It took some fiddling to get the tape in, but after that it worked really well.  This is me holding the foot down with my seam ripper for the picture. 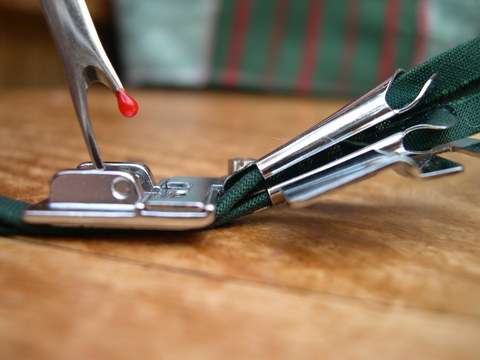 I went slowly and when I got to the end I stopped just before it needed to lap over the beginning.  I put the normal foot back on and finished it off.  Brilliant!

I did the armholes the old way, machining the tape on to the inside, trimmed it, turned it to the outside and machined it again.

Here is the completed apron! 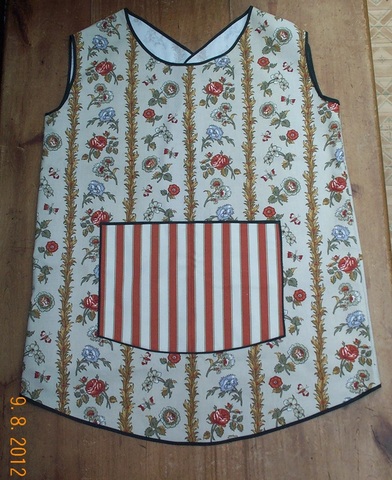 The fabrics were Laura Ashley curtains.I used more binding for the edges of the pocket I had decided to add.  Sooo much easier with my new gadget! 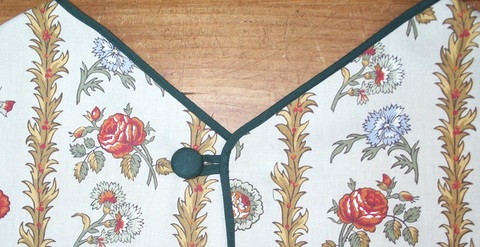 Lastly I added a self-covered button and loop.  Done.  I hope it fits okay and she likes it!

For those of you interested in making continuous Bias Binding the easy way, I found someone who had edited that tutorial to make the missing step more obvious - meet Lu Ann of Loose Threads!

I'm editing this post so that you all know that this method of making continuous bias binding was not my original idea.  I found a tutorial on one of the quilting self help sites, and followed it step by step and came up with this. Actually I ended up with 2 of these "hats".....so I wrote my own tutorial. 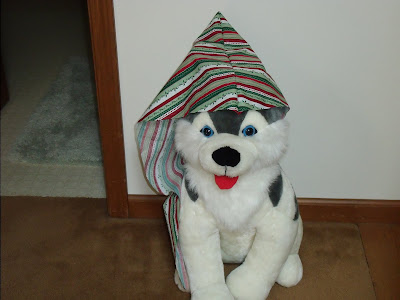 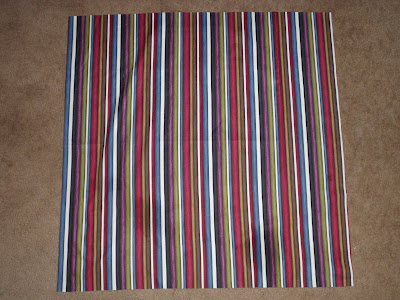 Fold this square in half with right sides together matching the selvages.  Sew around the 3 sides using a 1/4" seam.  (Don't sew on the folded edge.) 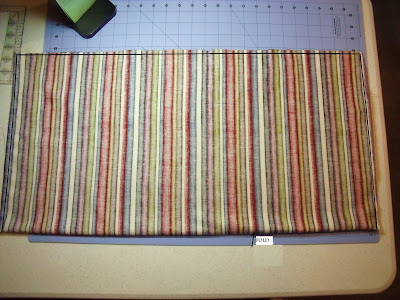 Now you can turn your sewing machine off.  This is all of the sewing you need to do.


Draw a diagonal line from one corner to the other. 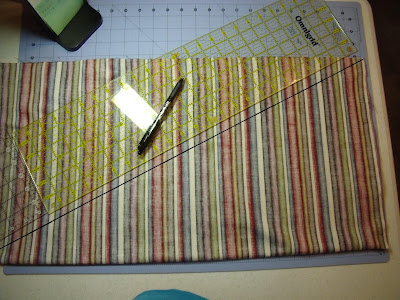 Clip the corners where you just drew the lines..... 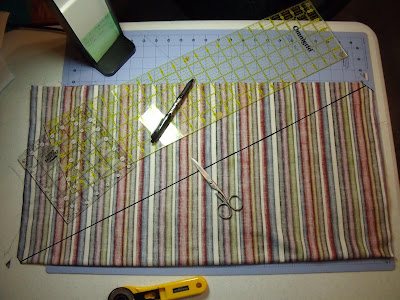 You just need to clip enough in order to be able to get your scissors in between the fabric layers. 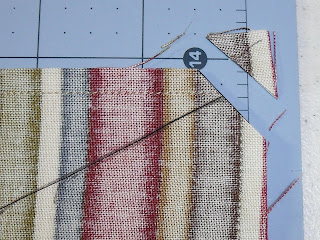 Now flip the square over and repeat the last step on the opposite corners (the ones that are NOT clipped yet).  After you've drawn this line, clip these two corners. 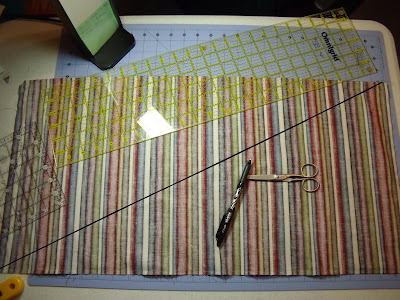 Carefully cut on the lines being sure to cut the layers separately. 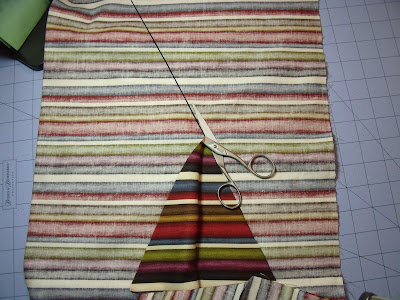 Now pick the fabric up and form it into a tube. Press the seams. 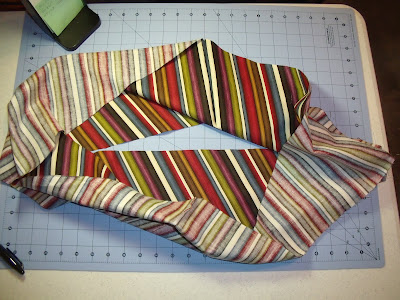 Even up the edges. 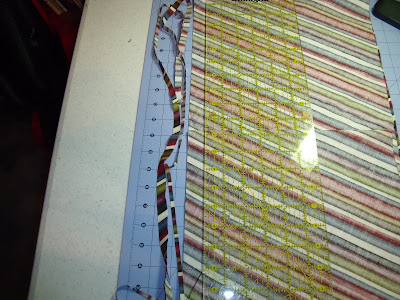 Now draw lines on the tube the width of your preferred binding.  But, don't draw these lines all the way to the top....stop about 6 inches from the top of the tube. 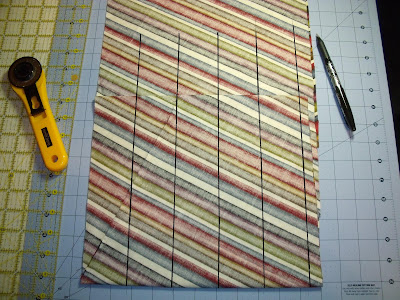 This is a better photo.  With your rotary cutter cut the binding strips stopping approximately where you see the line in the photo below. 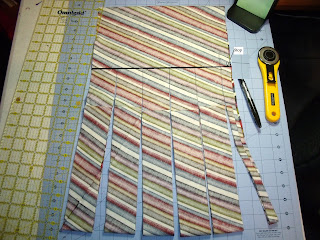 Now pick up the tube and rotate it until the uncut portion is centered on the cutting mat.

Draw lines to connect the strips on the bottom with the next one diagonally on the top as shown in the photo below.  (This is the essential instruction I missed! - Karen)  Next cut on these lines with scissors. 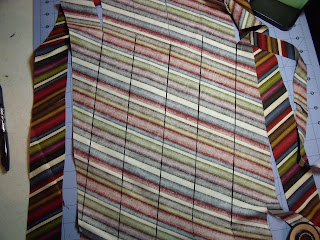 That step is hard to explain but hopefully the picture will help explain it.

Press the binding in half.  From 3/4 yard of fabric I ended up with 8 yards 7 inches of binding. 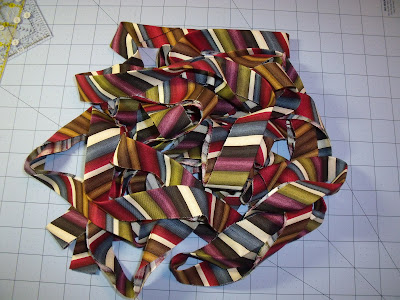 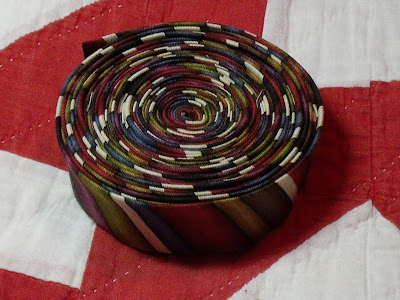 Below is bias binding that I made from a yard of fabric.  The piece at the left is left over from cutting the square and can go in my scrap bin.  The little pile in the middle is all of the waste from making the binding. 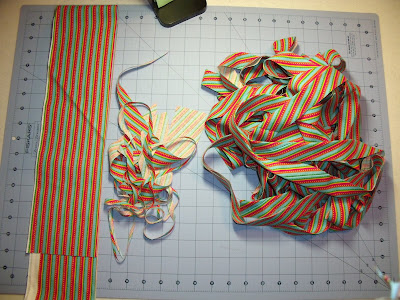 I really like this method and hope you will give it a try. 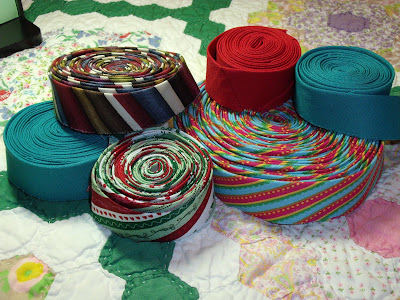 If you have any questions please don't hesitate to email me at
krugla@gmail.com

Love it! I have made binding this way but I always need to look back at a tutorial each time. Thank you for posting!