How Not to Sew a Lined Shoulder Tote Bag! 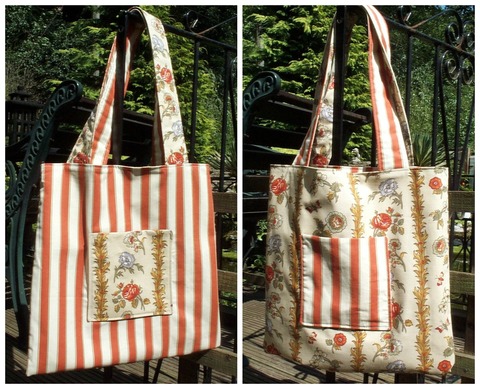 A couple of years ago I made this reversible shoulder tote for a friend.  I like a shoulder bag as it leaves my hands free, but I'm not bothered about it being reversible so long as it's lined.  I decided it was time to make one for myself. 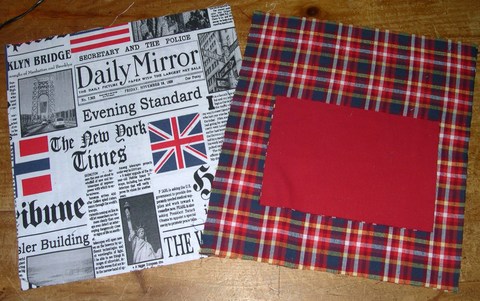 I wanted to use this newsprint fabric I'd just bought.  I teamed it with this brushed cotton plaid and a piece of red canvas for the slip pocket.  I thought I could adapt the pattern and instructions I wrote for the original reversible bag.   I had to cut two panels instead of a single piece for the outer bag as this was a directional print, and also for the lining as it was being cut from recycled jacket lining. 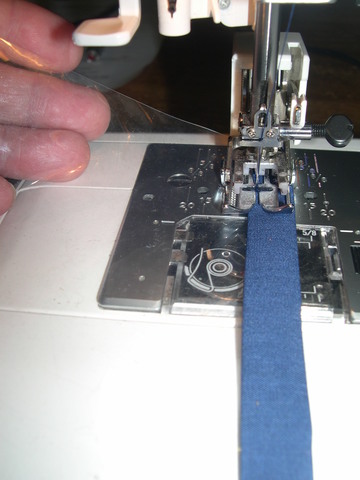 I didn't want to put a normal pocket on the outside as it would hide the print, so I used clear vinyl.  I cut it the width of the bag so the sides will be caught in the seams.  I made some 1/2" binding tape in royal blue to attach to the top and bottom to strengthen the edge. Why is it the bit I want to feature is always in an awkward place on the fabric, so you waste a lot of material trying to get that bit in the centre of your bag?  I think the binding makes a nice statement, and frames the flags (it also makes it easy to see where the pocket is!). 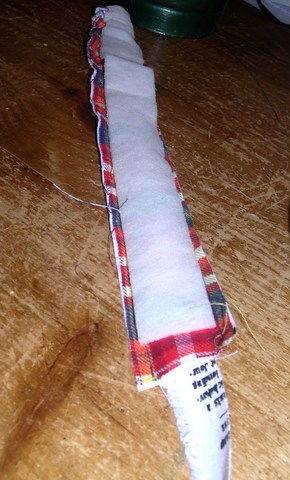 I made lined straps.  I don't have a 'Turn it All' gadget (yet) so I used the selvedge edge I had cut off and sewed it into the seam allowance, temporarily closing one end.  Then I stitched the strap right sides together down both sides, and used the tape to pull it right side out.  It worked a treat! I unpicked the end and removed it before giving it a good press and making the second strap. 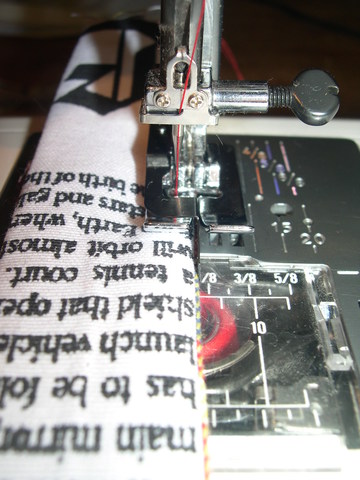 To topstitch the straps I fitted my "Stitch in the Ditch" foot, moved my needle as far to the left as it would go, and stitched down both the edges. Then I fitted my "1/4 inch seam" foot, moved the needle to the far left again and did a second row of stitching on both sides.  I was really pleased with the resulting perfectly straight lines!  I think I showed great confidence by sewing it in red! I made the slip pocket for the lining, pinned and stitched it in position, backstitching at the beginning and end. This is the finished bag with the plaid lining side out.  I think the pocket looks a bit small. 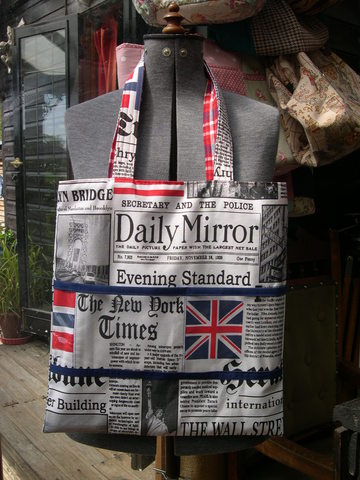 Newsprint side out.  I divided the pocket but you can't really see it.  I love that it has a real retro "Carnaby Street" look, and started using it straight away.  Unfortunately I then realised my mistake; everything stuck to the brushed cotton lining!  I also realised I really wanted to have somewhere 'safe' to stash my purse/wallet and/or phone.  So I unpicked it and removed the lining but kept the straps.  I wasn't going to waste all that perfect stitching! I had enough of this 'Concerto Encore' left from making "The Essential Wristlet" to make one side, and some recycled striped sheeting that would do for the other side and the slip pockets.  I am going to add a zipped pocket to the Concerto side, low down, so my purse/wallet will sit on the bottom of the bag rather than pull the side down as it's a bit of a lump.  The new version won't be reversible, but that's not important. 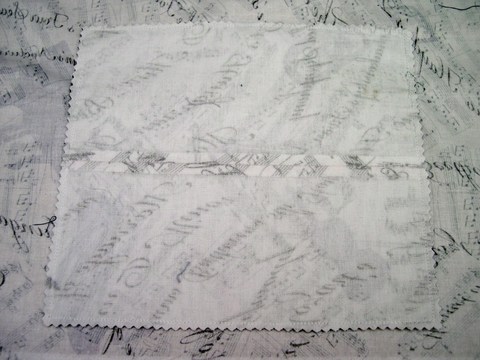 I only had a narrow strip of 'Concerto' left after cutting the main panel, so I cut it in half and pieced it together for the back of the pocket (the bit that shows when the zipper is open) and fused some woven interfacing over it.  The join will not be visible as it is well below the zipped opening. I used the striped sheeting for the front of the pocket.  Here is the back of the finished pocket 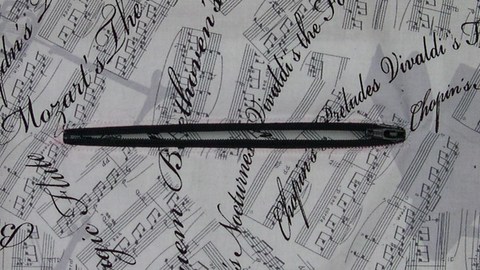 Here is the front of the zipped pocket.  Luckily I actually had a 10" black zipper in my collection which I cut to size.  It's unzipped so you can see the matching back. 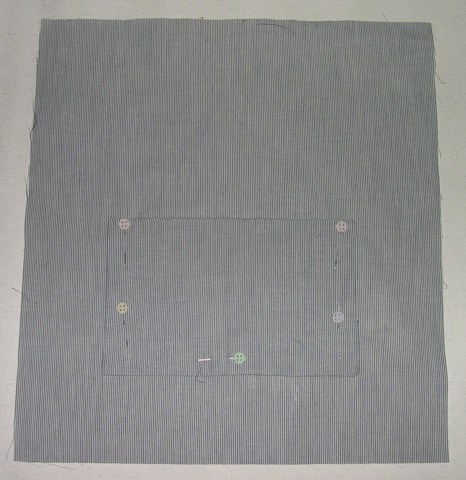 This is the striped side of the lining, with the slip pocket pinned in place.  I divided it up with a pen slot on one end, then a narrow and wide section.  I finished the pocket and stitched the front and back together, then suddenly decided I wanted it to have more body!  It was too late to add fusible fleece, but I had some compressed Thermolan left I could stitch on. 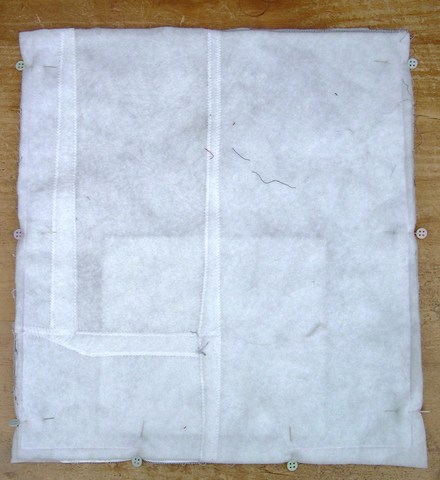 Well actually I only had one piece big enough for one side, but I had enough scraps to piece a panel together for the other side!  I used some Steam-a-Seam Lite 2 to join the bits, then went over the joins with a zig-zag stitch.  I couldn't be bothered to undo my stitches and attach it to each side, so I pinned it underneath and stitched over the previous stitching to fix it in place.  Then I flipped it over and did the same for the second panel. 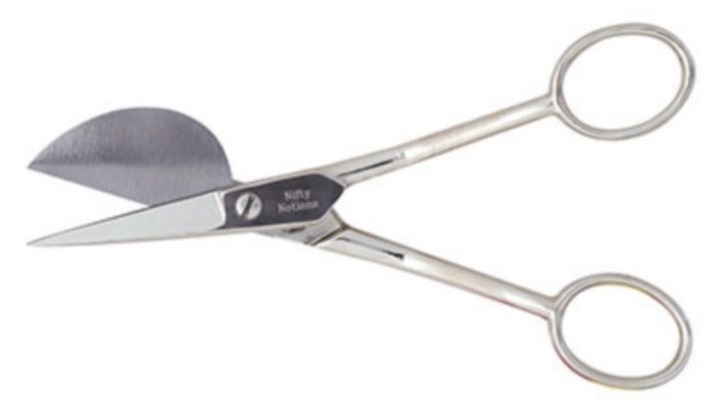 I used my new Applique Scissors to trim it out of the seams to reduce bulk.  They made it so much easier! I put the new lining in, and checked all the seams were okay and turned it right side out through the gap.  I pressed everything and pushed the lining down inside the bag and pressed it again.  I pinned the lining about an inch below the top edge to stop it rolling over, and got ready to top-stitch. 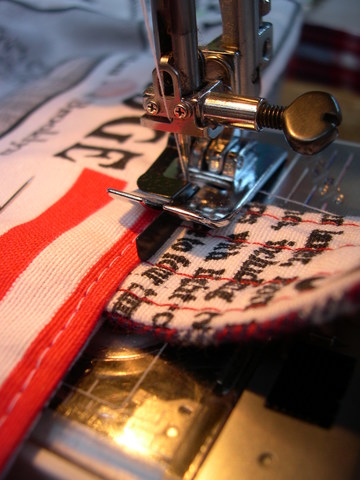 Once again I fitted the 'Stitch in the Ditch' foot and went along the edge, stopping to raise the guide over the straps as it reached them .  Here I have gone full circle.  I like to pull the threads through to the back and sew the ends in by hand, rather than backstitch. The final job was closing the turning opening in the lining.  I prefer to do this by hand as well as when I use the machine it makes a ridge.  Finished.  Again. 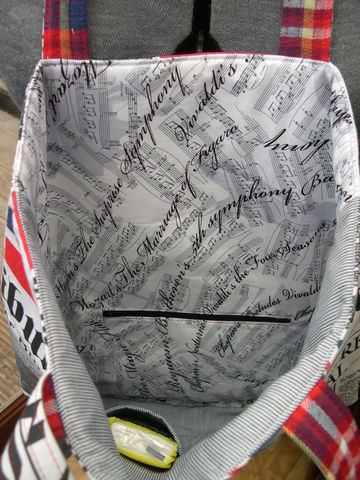 Here's the Concerto side of my new lining, with the low zipped pocket for my purse or mobile phone. Here's the striped side, with my divided slip pocket already loaded with a notepad, tissues and a pen! Here's the back view.  The outside of the bag doesn't really look any different, just a little smoother, but it feels much nicer with the wadding and it is a little heavier. 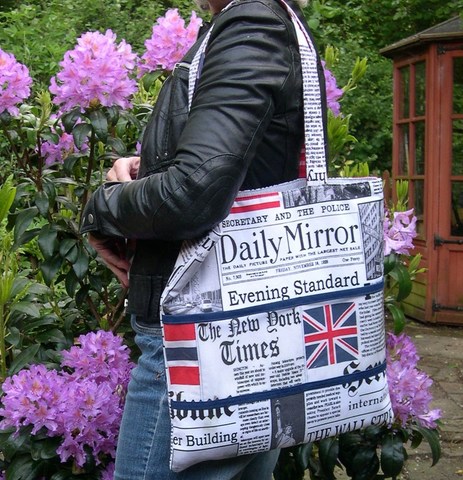 I'm happy now, I have got the bag I wanted, using what I had, even if I did do it all the wrong way round!