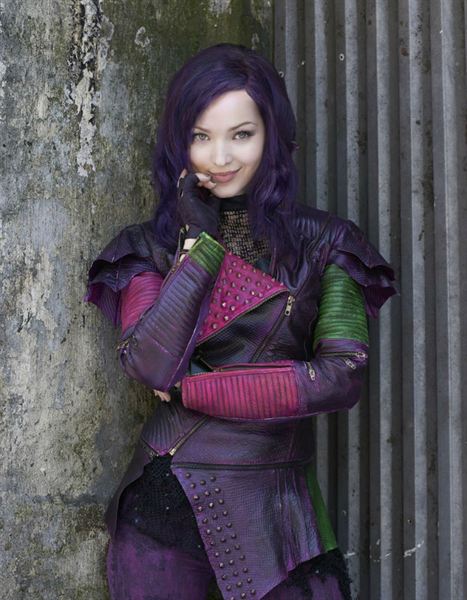 My great niece is going to a Halloween Party and wanted to dress up as one of the characters from the new Disney movie "Descendants" which tells the story of the children of the best known Fairy Tale characters. 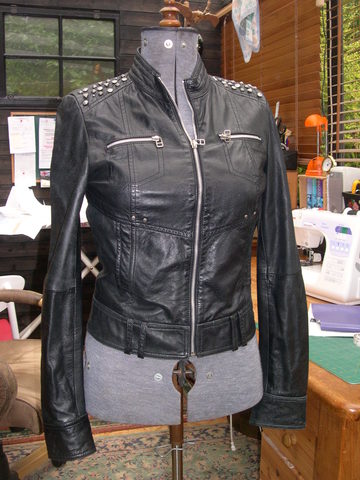 I had this old leather jacket I was given as it was ripped up the back to use as a base.  I bought a black faux leather mini skirt from a charity shop and her dad bought some purple vinyl so I set to work creating the "Mal" look.  I started by creating the 'skirt', joining shaped panels of black and purple together and basting them to the jacket.  I cut the belt loops off then used my machine (with a walking foot and leather needle) to stitch it on securely. 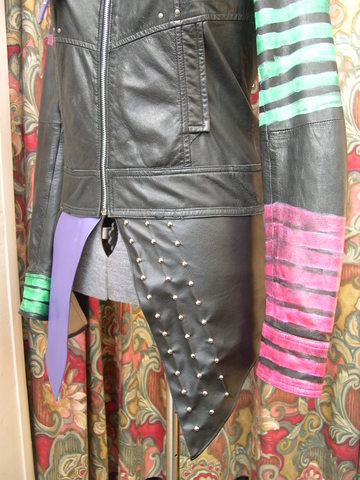 Last touch was to add studs.  This was the first time I had used studs.  I bought spiked cones on e-bay and googled how to apply them.  I used Dylon Fabric paint to add the green and pink stripes on the sleeves.  I had to paint the stripes in white first, then go over with the colours, otherwise it didn't show up. 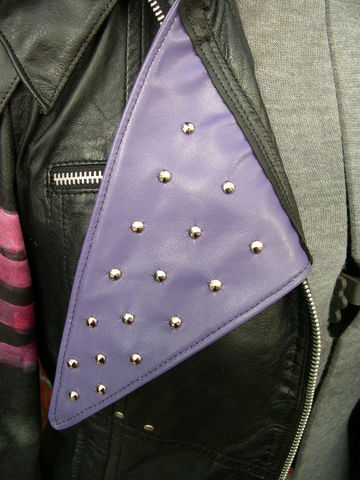 Then I made the long pointed lapel from from the purple vinyl by sewing 2 pieces wrong sides together, trimming the seam allowance down and turning it right side out.  The studs were applied and I added a binding strip to the open end using a strip of the faux black leather and basted it in place.  The jacket can be zipped up as far as the lapel which hangs down quite naturally considering it's a fake. 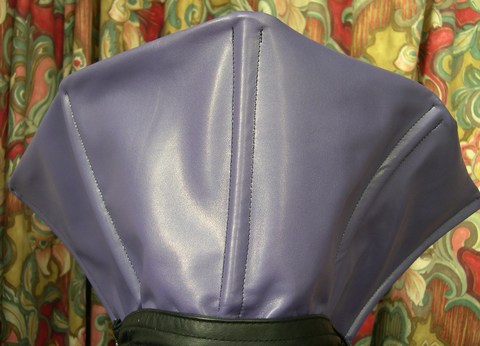 For the collar I pieced together 4 panels of purple vinyl to create the shape I wanted, then added a facing. To make it stand up I inserted 4 'ribs' cut from piped bag handle tubing.  I put them inside up against the seams and stitched down the other side with my piping foot to enclose it like piping.  I hand stitched it to the inside of the existing collar lining the edge up with the collar seam. 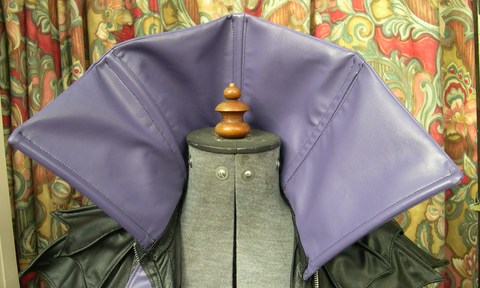 As the tubing was recycled it had a distinct curve which I manoeuvred to curve the collar up and out. Again I used a strip of the faux black leather as a binding and basted this in place around the existing upright collar, before machine stitching it in place along the top of the outside of the existing collar, so it is now stitched on top and bottom. I had fun making the bat-wing shoulder caps!  I did these as 2 layers, one bigger than the other for a tiered look.  I cut the shapes I needed using kitchen towel and used it as a pattern.  I cut them in the black faux leather and used some green sheeting as lining.  I sewed them right sides together leaving a gap for turning.  I used some string to make corded pintucks for the struts, one in the centre and one each side,   I positioned them to start a half inch from the edges then edgestitched each panel. 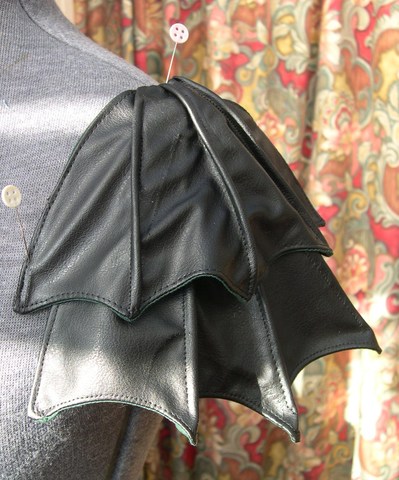 Here it is with the two layers attached together.  I think they are pretty effective!  When I attach them to the shoulders they will cover the existing studs. The final touch was to paint the back, as seen in this still from the film.  I sketched the heart onto the leather with my white chaco marker then painted it with white, then green, then hand painted the dragons. 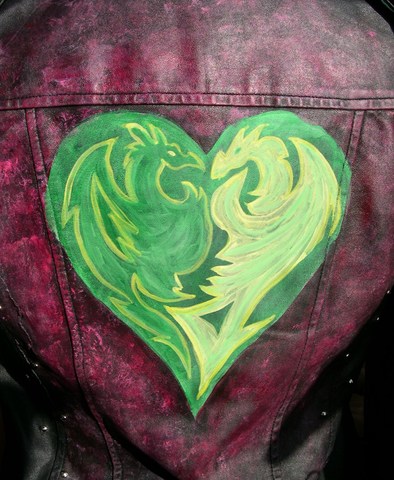 I outlined the dragons in yellow and filled them in with different shades of yellow and green.  I sponged around the heart with white, then pink.  When it was dry I added some studs. 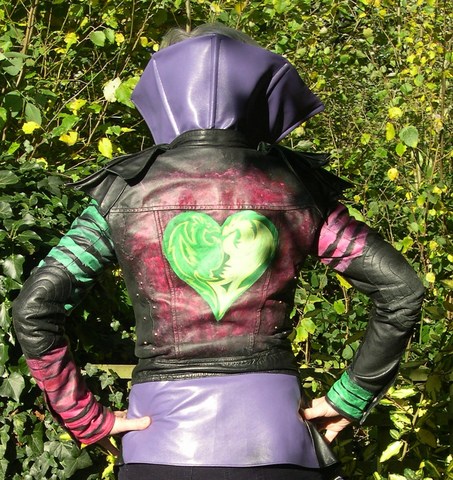 Back view.  I think the plain purple vinyl spoils it but I didn't have any more black faux leather to use.  I rummaged in my cupboards and found some scrap red oxblood faux leather that ressembled the sponged area around the heart. 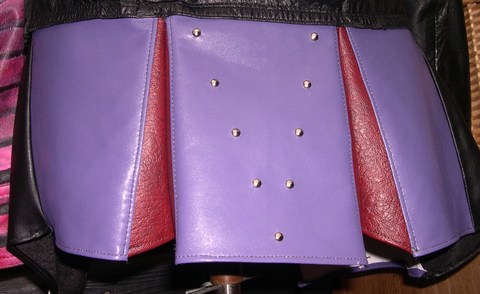 I slashed the purple in line with the seams on the back of the jacket, and inserted the red as inverted pleats.  As a final touch I added a few more studs!  Now it looks more interesting! 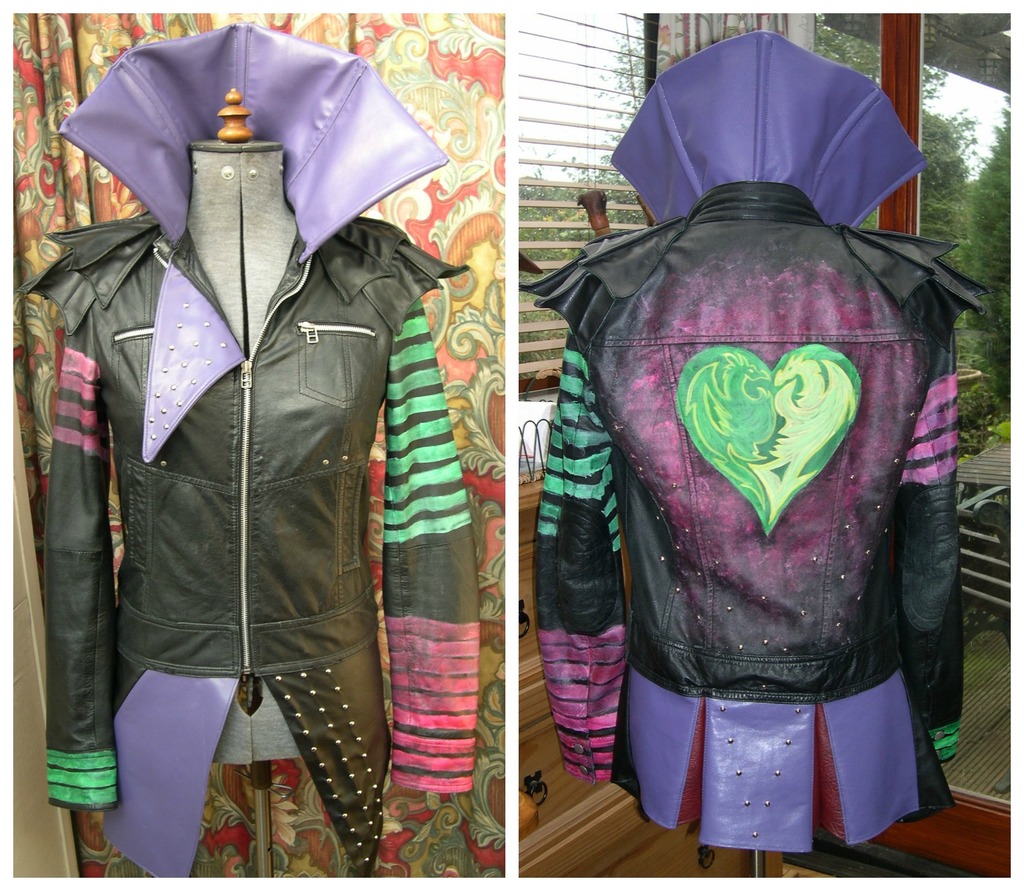 Finished and delivered ready for the party tomorrow night.  I've asked for photos as I won't see the full effect otherwise! I'm pretty pleased with the results, it certainly compares well with the official Disney Store De-Luxe costume and I could see she was really pleased.  That's what it's all about really, isn't it.