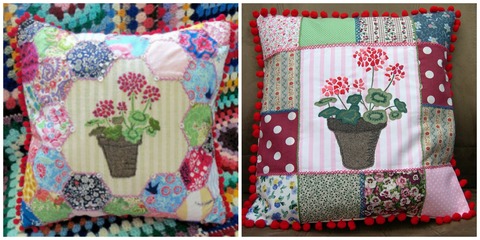 Last year for MIL's birthday I wanted to made her something, and decided on a cushion cover.  I bought the Summer Gypsy Cushion pattern from bustleandsew.com as it looked pretty and fun. However, when I made mine I had a few problems.  My embroidery came out bigger than the illustration, so then I struggled with fitting the hexagons.  I gave up and used simple square patches instead.  I also used different embroidery stitches, and skipped adding the buttons, but MIL and I were still pleased with the result!

So this year I asked her if she would like another cushion, and she said yes.  I decided to do the same again but with a different flower in the pot!  I chose a Spring Hyacinth, and found a design to work from on this free colouring page on-line.  I cut a 12" square in the same pink and white striped cotton for the centre panel. 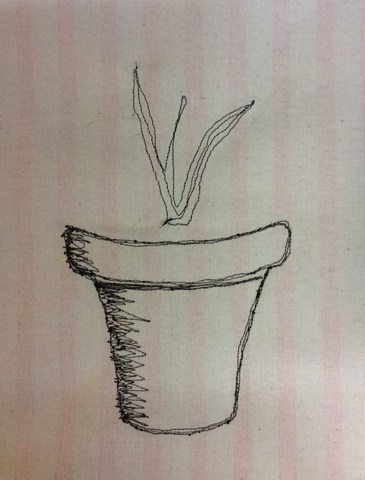 I added a 12" square of fusible woven interfacing to the the back of the panel to act as stabiliser (and also to make the cotton more opaque).  I cut and applied the tweed for the flowerpot (right side up for the main pot and wrong side up for the rim) using Bondaweb (wonderunder).  I did the same for the rear leaves then fixed it all in place with free motion machine embroidery.  This is the back of the panel, as it shows my stitching, and the shading I added up one side of the pot really well! 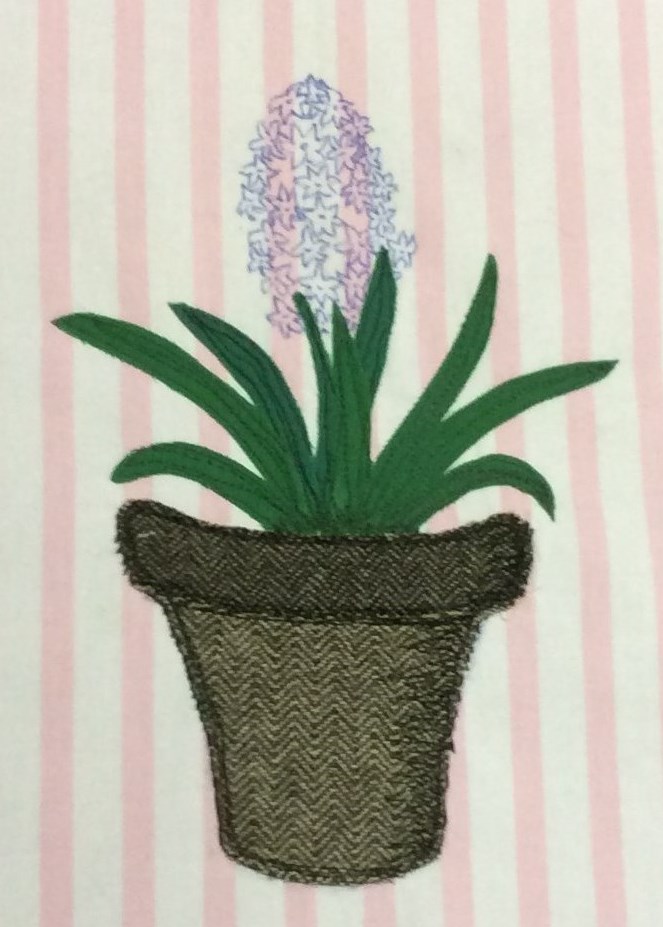 After I added the front leaves I used my light box to trace the Hyacinth flower onto the panel using a Frixion (heat eraseable) pen. I did it that way round so I wouldn't accidentally erase my tracing when I fused the leaves on!  Then I put it into an embroidery ring, ready to hand embroider. 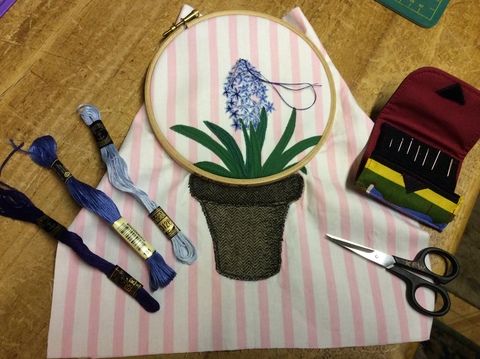 Having rummaged through my Anchor Embroidery floss collection I chose 3 shades of blue to work the flowers. Some of my floss came to me from my mother, and the numbers are not the same as todays skeins.  Using the palest blue (0128) I made a blossom with 5 lazy daisy stitches (aka detached chain stitch) to form the outline of petals. 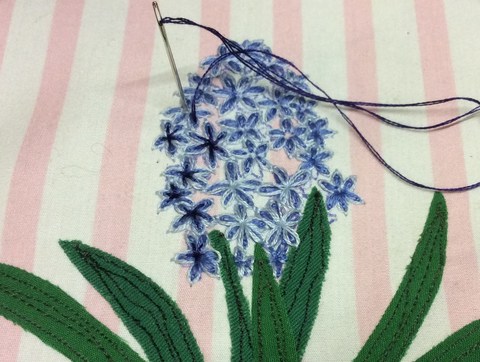 Then I used the middle shade (131) to make another lazy daisy stitch tight inside the first ones, so the paler colour just edged each petal.  I finished off by using the darkest shade (533) to make a straight stitch to fill the inside of the previous stitch, making it solid.  It also made it look a little more three dimensional. 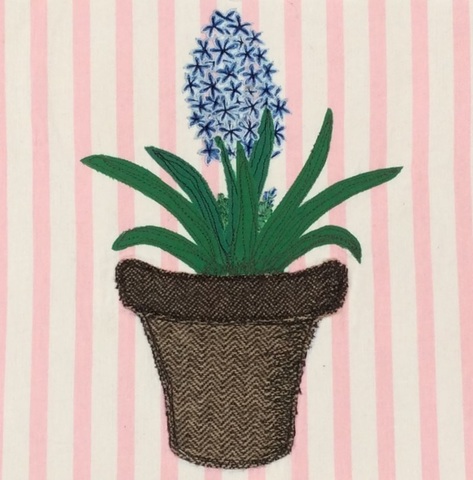 I got the overall shape I wanted with the larger flowers, then went back and fitted smaller ones in the gaps.  Then I added a couple of buds poking out at the base.  Done.  Not sure if it's a bit too short and fat, but I like the overall effect!  This centte panel is laid in the middle of a 16" square of plain cotton. 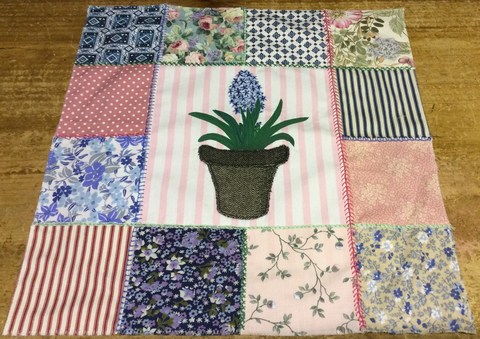 The mock patchwork is formed from 4" squares of quiltweight cotton arranged around the centre panel to form a border, then it is all stitched down with a zig-zag stitch. Then I hand embroidered over the seams, using 3 strands of Anchor Embroidery Floss. To protect the stitching I added a 16" square of cotton to the back of the front panel.  When it came to the back of the cushion, I was pleased to find I still had some of the same cream canvas left that I used last time.  I overlocked the edges. It's a simple envelope closure made with two panels 16" x 12",with one 16" edge turned under twice and stitched down. 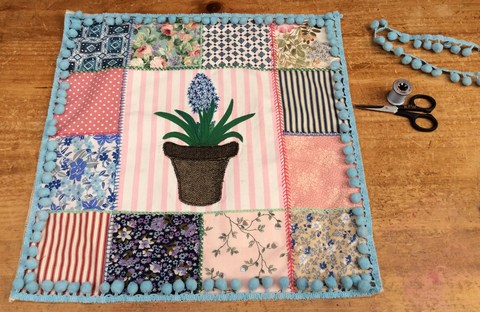 I didn't have any of the red pom-pom trim left, so I decided to buy some in blue instead to co-ordinate with the hyacinth. With the front panel right side up, I basted trim in place by hand with the tape on the raw edge, and the pom-poms towards the middle.   The back panels are laid on top, right sides down with the neatened edges overlapping and raw edges matched up. Pin and stitch close to the pom-poms.  I used my universal zipper foot for this to get good and close. Turned right side out, corners poked out and the whole thing given a final press. Done! Your pillow is wonderful. Love the hyacinth stitchery. I pinned your books to my Craft Books board.