My dad is 91, and lives on the cliff at the seaside.  In previous years I have made him cushions using patterns from Bustle and Sew, starting with this seagull which has some lines from the song "Oh I Do Love to be Beside the Seaside" which seemed very fitting! 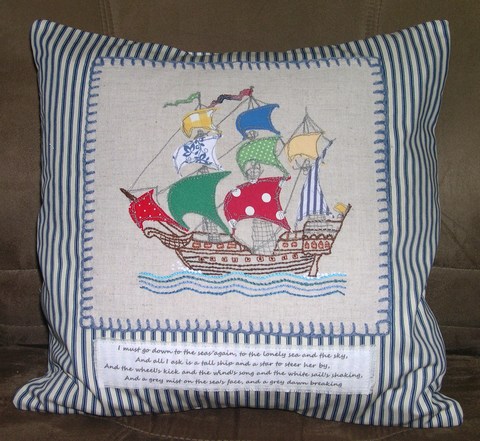 So the next year I adapted this one from Helen's applique picture  "Where shall we Adventure?"  by reducing the size and making it to match the seagull on the same ticking effect cotton.  Then I added "I must go down to the sea again" from the poem 'Sea Fever' by John Masefield to keep it nautical! 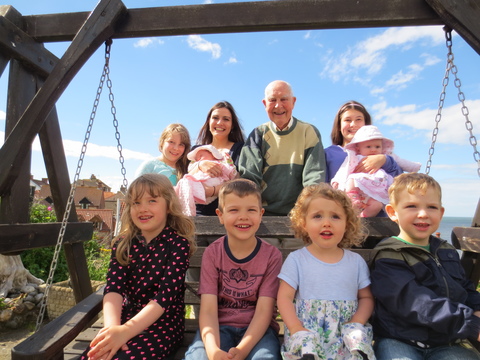 So this year I was scratching my head, wondering what I could give him this time, and I remembered this photo of him with all his great grandchildren on his 2013 calendar.  He has eight great grand-kids and one great great grand-kid.  He had loved this picture, so it seemed obvious I should use it to make him another cushion, to match the others! I edited and cropped the photo then printed it on some printable cotton.  I used Moda navy ticking effect cotton, and backed it with some fusible woven interfacing (Vilene G700/Pellon SF101) and some white cotton sheeting. Then instead of adding a poem, I asked for all the kids signature's.  They are all three years older now, and could mostly produce a rough autograph with a little help!  I used my printer to adjust the sizes so they were all roughly the same size, and traced them onto the fabric using my light box and a Frixion pen.  I hand-embroidered them using perle #5 thread in the same bright colours as the bunting.  I used backstitch, stem stitch and split stitch. Here it is with the cushion completed.  I think it would have worked better if I had put the signatures on scraps of plain fabric, as they don't show up as well on the stripes. wonderful present for sure.