A few months ago I asked if we could recover the bench seat in my 1963 Chevrolet truck.  We found a professionally renovated and recovered bottom part on e-bay, so the Other Half decided I could just recover the back to match as the padding was okay.  It sort of matches,  insomuchas it's a textured vinyl whereas the other was smooth.  It took a bit more effort than making the sun visors, and I wish I could learn how to do it properly, but this is fine.  It involved a lot of walking from one side of the truck to the other when fitting, as I can't reach the other side even when I am sitting in it.  The zebra striped rug is just in case of need - it also looks good! When I asked if we could get a cover for the buck (it rains a lot here) he said we could make a tonneau cover ourselves.  He bought a big red cover with eyelets meant to be lashed down, and cut it to size, then asked me to turn up a 5" hem all round.  Well it was a vinyl of sorts, so once again I used my leather needles, and my new Walking Foot (the wide toe one I had bought in error is now shoved in the back of a drawer) and had a dry run on a spare piece.  I had to adjust the tension, but it worked okay.

I was using Guttermans All Purpose thread in white, but decided red would be better at concealing any errors!  The OH wanted to know why I couldn't use a thicker thread, and I pointed out I had bought Gutterman's Upholstery thread to use making the vinyl cover for the bench seat only to find the leather needle shredded it, as it seems the aperture in the needle is not big enough.  If I used a needle with a bigger aperture, like a topstitch, the needle could not pierce the vinyl like the specially chisel-shaped leather needle could.  I bought some Coats Duet in red, but soon found that shredded too, and had to start again with the Guttermans white.  Not a happy bunny! 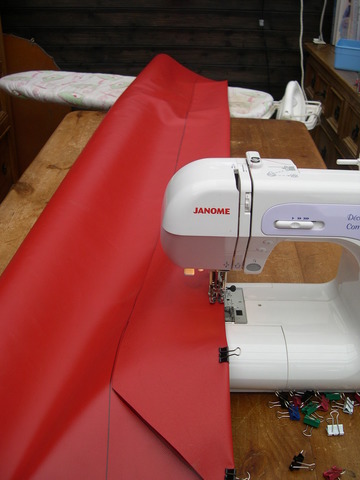 The piece was joined half way down the sides, and my machine couldn't go over the seam.  I had to stop sewing on one side and start again on the other.

Bear in mind I had to crawl under the table to get to the machine, and stand twisting across the table and bent sideways to hold everything in place, it was not a comfortable way to spend the day!  I mitred the corners to get rid of some bulk, and finally finished.

The next step was pinching the corners to fit the buck.  I used a hand needle and nylon thread and a thimble as this had to be done outside, it would be another nightmare carting it in and out to the machine.  It required so much pressure to get the needle through, it started to bend, and slipped off the thimble into my thumb.  I finally got one corner done.  Trying to get the next corner done was even worse, resulting with another hold in my thumb.  I had to pull it down to sew it and when I put it back in place it didn't fit right.  I had had enough by then, and the OH got the "fine, you do it then!" reaction. He unpicked some of the really thick twine-like thread used on the cover originally from the off-cuts, then took one of my thick embroidery needles, and finished the corners with a bar tack.  He spent the next day fitting the marine quality twist-locks, 10 each side, took him ages.

So here is my home-made tonneau cover, which looks fine and does the job, but we now know why they cost so much to buy a professionally made one!  After seeing this picture I did go wash it by the way, and I did thank the OH for all his work.  So are one of you lovely readers going to tell me there is a needle that takes thicker thread and will pierce vinyl? 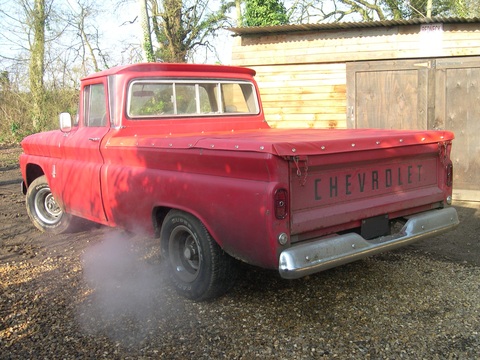 I was rather hoping to make my new dressing gown next, but mum-in-law has requested an apron for her birthday - with teddy bears - so I will be doing that instead.  At least my thumb will get to heal up!