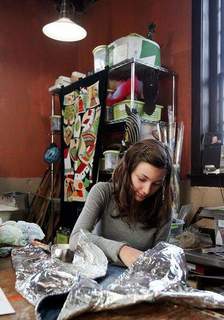 Anne-Sara Odor stood amid a clutch of young fashion designers spelling out the details of their upcoming runway show and asking them to select the music to accompany their models' walk. "There are going to be hundreds of people here and invitations sent out, so we want the show to be stunning," she instructed. "It will be hard work, but it will be really fun." A former vice president of women's design at Abercrombie and Fitch, Odor has worked with a bevy of famous designers and models in her successful career, but on this late July afternoon the designers she was rallying were local teenagers. This summer Odor led a 10-week fashion design course at Granville Studio of Visual Arts. Local teens learned to design their own apparel based on the style of their favorite celebrities. The students will show off their work during a runway show Sept. 6 at the studio, located on the grounds of the Bryn Du Mansion. The show is part of a larger event that also will include a student art opening and a film...
read on!