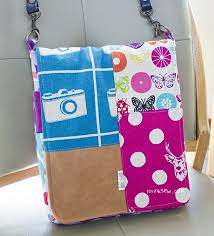 I wanted a new bag, something I could carry my iPad Air in, as it didn't really fit inside my current bag.  So I went browsing the indie sites  and I chose this pattern, the Evelyn Tablet Bag from ithinksew.com (aka sewingwithme3) as I liked the shape, the size, and the pieced flap.  I'm not keen on their choice of fabrics, but I have an idea of how I want it to look.  It's the one thing I think ALL the indie designers could learn from the big four; pictures of the finished bag are great, but they need to add a simple line drawing, so you can see the basic shape and design without the distraction of fabric choices. 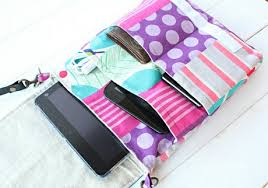 I want to use it for more than just the tablet though, so I wanted to know what was under the flap.  Happily there were some useful pockets.  The short ones are divided in two, the taller one has a Velcro closure, the main compartment is deep enough for the tablet and a bit more.  The flap closes with Velcro and they suggest a bought clip-on strap. I have used one of their patterns before, the Josy Clutch; here and here and then the black & white one.  There are plenty of pictures thought I find the instructions pretty basic.  I always want to do something different so I have to make changes, for instance I made the Josy 25% bigger and the strap detachable rather than fixed on one side.  I also added a slip and zipped pocket inside.

For the Evelyn, I want to;

1. Use ByAnnies Soft & Stable for firmer structure and padding; which means I have to make allowances for the extra bulk and make sure I trim it out of all the seams as I go along.

2. Use invisible magnetic snaps in place of Velcro for the main flap closure; because I think it will look better (certainly more professional) and because I liked them on my Cosmo Convertible! So I went ahead and bought, downloaded, printed and assembled the pattern pieces.  Then I picked out the fabrics I had in mind and checked my hardware supplies.  I will make my own strap.  I started by making the pieced flap and found the measurements a bit skimpy so I have cut myself pattern pieces with an additional 3/8" seam allowance for next time! 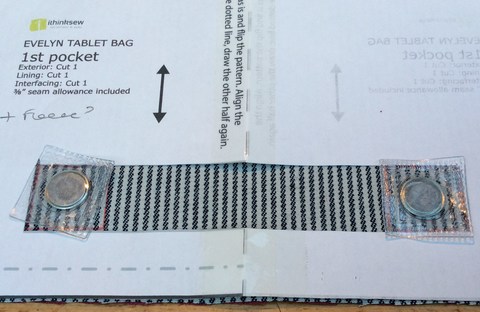 I decided to position the invisible magnetic snaps at either end of the box marked to position the Velcro.  I did this the easy way, by cutting out a window as you can see above, so if I was putting the Velcro on I could then draw the box through the window.  I attached the fusible interfacing to the back of the pieced flap, drew the pattern on and cut it.  Then I stitched the snaps in place. 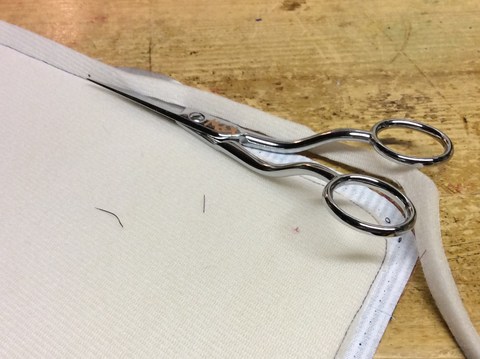 I used the flap piece as the pattern to cut the Soft & Stable.  I keep it inplace with Odif 505 Temporary Adhesive Spray then baste it on with a 1/8" seam using my longest stitch (5 on my janome) and 0 tension so I can pull it all out easily.  To get a 3/8" seam allowance I measured from the edge of the foot and moved my needle across to 3/8" so I can use the edge of the foot as a guide.  Once the flap and lining were stitched together I removed the basting and trimmed the S&S out of the seam with my Duck Billed Applique Scissors. I chose this red cotton for the lining.  First up it frayed all over the place, so I re-threaded my overlocker in red and tidied it up.  Then as I wanted to match my threads on the bag I was constantly swapping my threads about:- For accurate top stitching I use my Stitch in the Ditch foot and move the needle to the right or left as needed.  I usually lengthen my stitch to 3 or 3.5 as well.  It's not so great on curves though (as was shown on the recent series 4 of the Great British Sewing Bee!). 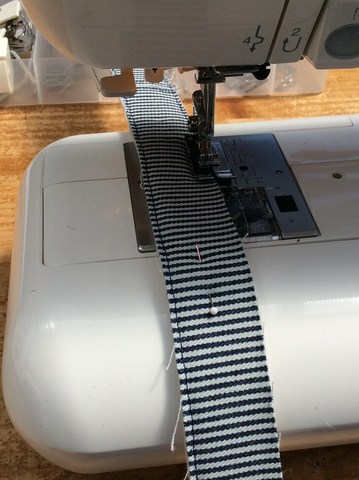 I didn't like the loop sliding around on the suggested 3/4" size D-ring, so I ordered some more of the dainty 1/2" D rings together with some matching 1/2" lobster clasps for the strap from BobbinGirl.co.uk.  I made the strap 24" long and turned 1/4" in at the ends to neaten, fitted the clasps and finished it with a rivet either end. 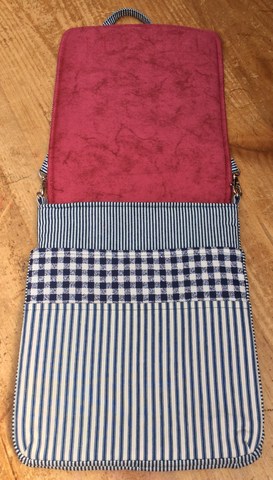 The moment of truth came when I tried closing it.  Would the magnetic catches to match up?  No, of course they didn't, I should have moved them to allow for the S&S adding bulk.  I went back and trimmed the seam joining the lining and the outer right down as I hadn't trimmed it at all. Then I went ahead and fitted everything together but pulled the outer towards the inside of the bag before top stitching it in place, to shorten it a bit more. I also added a rivet to each side of the bag through the base of the loop to nip that in a bit more too, and it matches the strap.  Now it works, but only just.  I went back to the pattern and marked the right position for another time, sitting on top of the velcro box instead of inside it.

I used pinstriped Hickory Denim, navy ticking stripes, a navy gingham print, and striped cotton recycled from a duvet cover.  I love it, it is so slim and crisp, the S&S makes it firm and smooth, as well as providing a soft padding.The red lining was fabric picked up at a charity shop.  If you wonder why there isn't a picture of my i-pad inside, it's because I am using it to take the pictures!